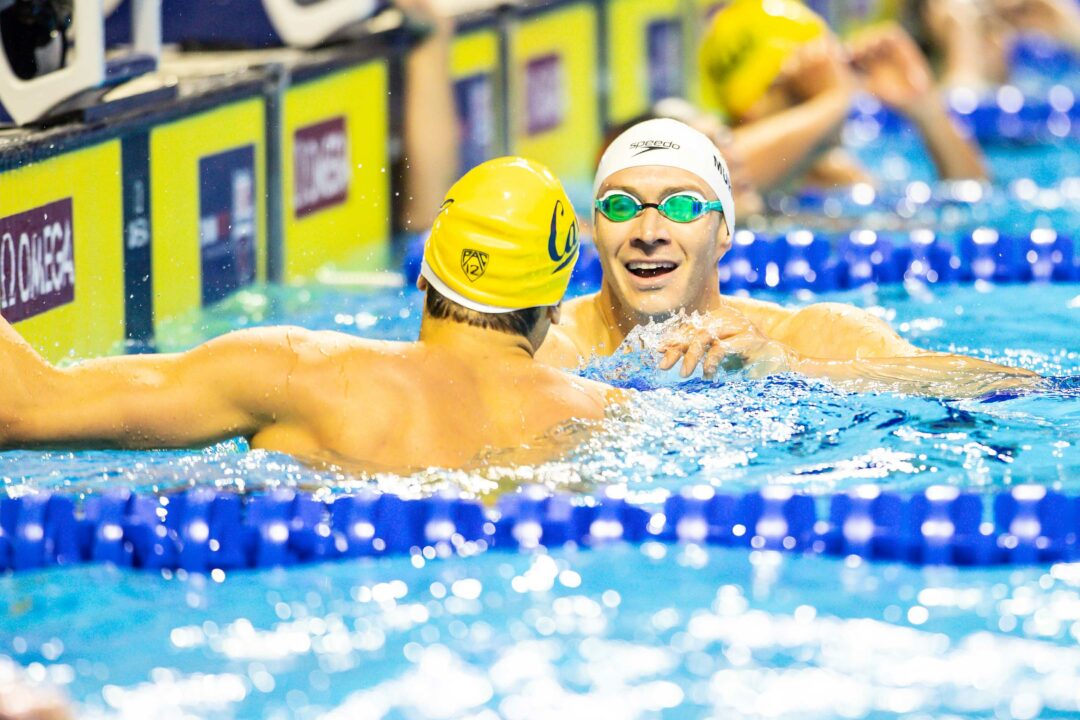 On Saturday night at the 2022 Fran Crippen SMOC, Cal pro Ryan Murphy clipped his season best of 1:56.78 in the 200 back, winning the event with a 1:56.43. Stock photo via Jack Spitser/Spitser Photography

On Saturday night at the 2022 Fran Crippen Swim Meet of Champions, Cal pro Ryan Murphy clipped his season best of 1:56.78 in the 200 back, winning the event with a 1:56.43. With the swim, Murphy reset the #1 time in the world this year, which was previously his 1:56.78 from the Pro Swim Series – Westmont in early March. Murphy was in a field of his own tonight, getting out to a solid first 100 split of 56.60. He then split 29.76 on the 3rd 50, before fading a bit down the stretch with a 30.07 on the final 50 of the race. Murphy is by far the top American in the event this year, setting himself up nicely for the U.S. International Team Trials, which take place at the end of this month.

Polish sprinter Kasia Wasick clocked the #4 time in the world this year to win the women’s 50 free. Swimming in a field of her own, Wasick roared to a 24.58, shortly after swimming a 24.63 in semifinals earlier in the session. Wasick has a personal best of 24.17, which she swam last summer.

In the women’s 50 breast, USC’s Kaitlyn Dobler swam a new personal best of 30.76, chipping 0.16 seconds off her previous best, which was set in 2019 at the World Junior Championships.

13-year-old La Mirada Armada product Kayla Han won the women’s 400 IM in 4:46.01. The swim makes Han the fastest 13-year-old all-time in the event, which you can read more about here.

Nice! It would be amazing to see him beat Rylov at his best event.

I simply don’t think you can discuss Rylov without also discussing RUSADA.
The Tokyo Games did not resolve, in the minds of many, the continuing problems with Russian swimmers and PED.

You have to admit Rylov’s techniques are better than Murph’s. While it doesn’t guarantee anything, he does have the elements and qualities of a fast swimmer, just not a respectful person.

There won’t be Rylov at worlds.

Wouldn’t you be if the one person who has your number in every major competition was out of the picture?

Personally, I’m hoping this is the year Irie takes the crown.

Where in the heck are Katie McLaughlin and Kathleen Baker!

Not care much about baker but do worry about Katie McLaughlin. Her career started so brightly with this 200 fly – 200fr famous double at World Championships and then these mishaps in the college followed. I’m a fan of her.