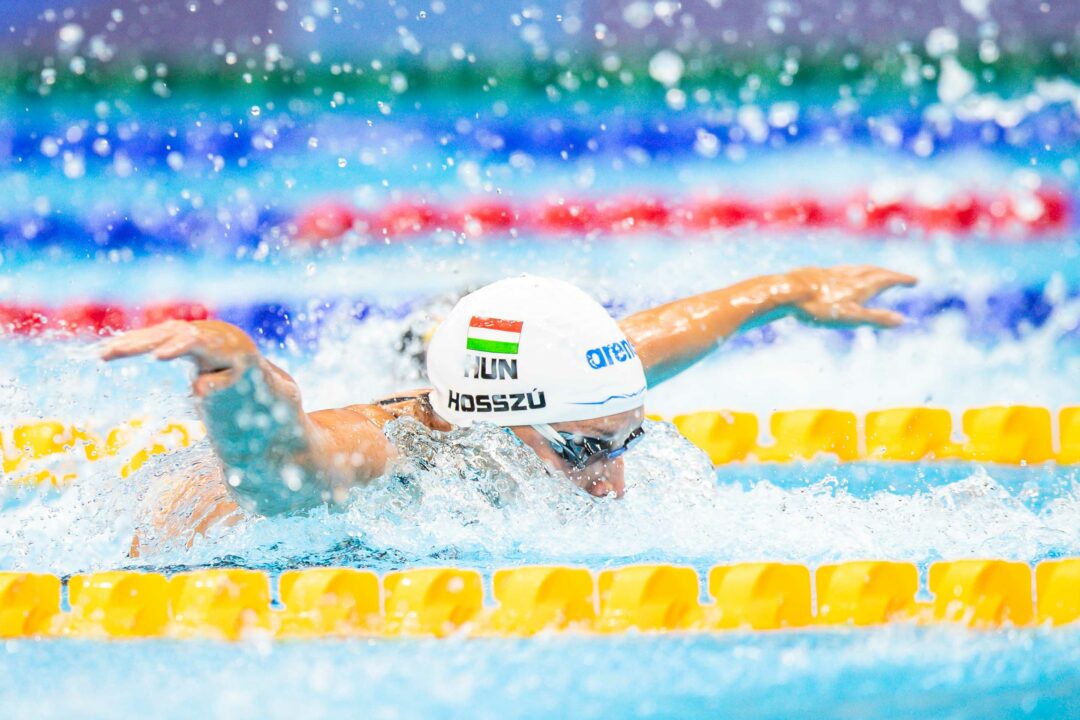 Hosszu has won 4 LC European Championships Gold medals in the 400 IM in her career and will be chasing #5 today. Stock photo via Jack Spitser/Spitser Photography

There were only a handful of notable scratches for Saturday morning’s prelims session.

There’s a single scratch in the top 20 of the men’s 200 fly. Bulgaria’s Antani Ivanov, the #13 seed in the event, has scratched the race.

The men’s 200 breast has seen 1 scratch in the top 20. Israel’s Ron Polonsky, who competes in the U.S. collegiately for Stanford University, has pulled out of the race. Polonsky was the #19 seed, so he was going to have a battle just to make it into semifinals.

The women’s 400 IM presents a really exciting dynamic that we don’t always get to see. Veterans Katinka Hosszu (HUN) and Mireia Belmonte (ESP) are the top 2 seeds in the event. The 33-year-old Hosszu is the World Record holder in the event, and while she’s certainly reaching the end of her career, she comes in as the top seed, and may just have it in her to find that magic again and win another European Championships Gold in her best event. Hosszu has won 4 LC European Championships Gold medals in the 400 IM in her career and will be chasing #5 today. Belmonte, 31, is one of the fastest performers all-time in the event, and enters less than half a second behind Hosszu. The formidable veteran duo will be pushed, however, as 18-year-old Hungarian Viktor Mihalyvari-Farkas is entered just over a seconds slower than Hosszu, Italian 22-year-old Ilaria Cusinato just over 2 seconds behind the leader. Italian 23-year-old Sara Franceschi has also been under 4:40 before in her career, coming in just behind Cusinato.

The men’s 200 breast is a very deep event, seeing 8 men enter under 2:10. Leading the pack is Dutchman Arno Kamminga, who enters at 2:07.01. Kamminga is coming off a disappointing performance in the 100 breast final, where he finished 7th, well off his personal best.

European Record holder Kira Toussaint leads the women’s 50 back psych sheet, coming in at 27.21. French up-and-comer Analia Pigree is seeded less than 0.1 seconds behind Toussaint, presenting quite a threat. Notably, 200 backstroke champion Margherita Panziera is not racing the 50 backstroke today, leaving a potential medalist out of the race.

Hungarian Kristof Milak enters the men’s 100 fly as the favorite by a wide margin. While Milak said he was putting an increased focus into his sprint freestyle races at these Championships, he’s a dominant force in the LCM 200 fly, and the #2 performer all-time in the men’s LCM 100 fly.

After a fantastic relay split on Thursday night, Netherlands’ Marrit Steenbergen will have a chance to back it up in the individual 200 free today. Steenbergen is seeded at 1:58.30, but she split 1:56 on the 4×200 free relay a few nights ago. Great Britain’s Freya Anderson is the top seed, coming in with the 1:56.05 she swam at the World Championships in June.