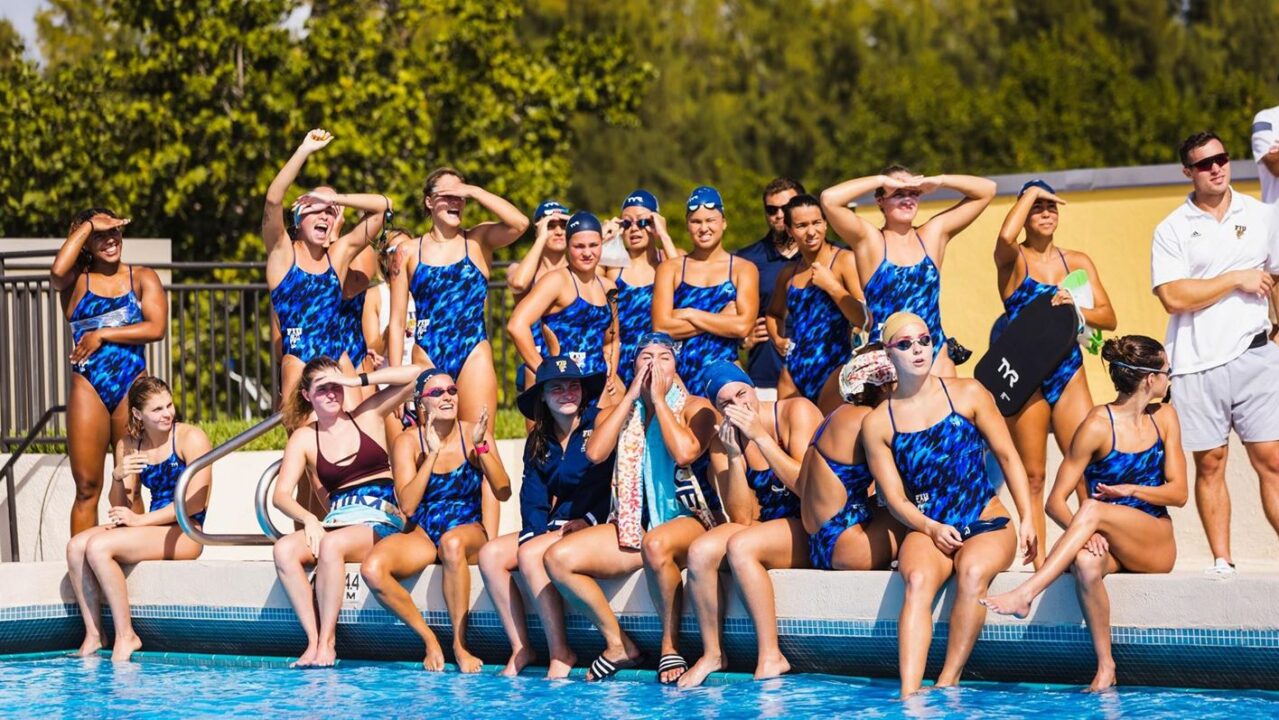 The FIU women will vie for their eighth straight Conference USA titles this weekend with Rice hot on their heels. Archive photo via Michael Berlfein (FIU Athletics)

The Pioneers topped both preseason polls released Wednesday by the league office.

The Florida International women come into the 2022 Conference USA Championships as the seven-time defending champions, having won every title dating back to 2015. Rice has been the runner-up in all seven seasons during the FIU streak, and projects to have a great chance to dethrone the champs this week.

200 Fly: Two of the meet’s top swimmers, FIU’s Stephanie Hussey and Rice’s Marta Cano-Minarro, are scheduled to lock horns in the 200 fly in what should be an excellent race. Hussey, a fifth-year graduate senior, was third last year, but leads the conference ranks this season with her 1:58.19 from the Purdue Invitational—her fastest time since the 2020 Conference USA Championships when she won the title (1:58.15).

Cano Minarro, a senior, won both the 200 free and 200 IM in her sophomore season in 2020, but her highest finish last year was eighth in the 200 IM. In the 200 fly, she was third two seasons ago, and similar to Hussey, has neared her PB set there this season in 1:58.73. That swim was done in a dual meet earlier this month, indicating she may be the one to beat, assuming she swims it (Cano Minarro has pre-entered five events, so she’ll end up dropping two of her entries).

The only other swimmer sub-2:00 this season is Rice freshman Arielle Hayon, who hit a best of 1:59.43 a few weeks ago in the Owls’ dual with Texas. 2021 winner Lindsay Mathys of Rice has graduated.

100 Free: The 100 free is a stacked event, and given it’s position late on the meet schedule, could have team title ramifications with the top six seeds consisting of three FIU swimmers and three from Rice.

FIU fifth-year Sara Gyertyanffy and her teammate Hussey come in with the top two seeds, having clocked 49.53 and 49.70, respectively, at the Purdue Invitational in November. Following those two are Rice juniors Lauren McDougall (49.83), Maddy Howe (49.98) and senior Cano Minarro, who may end up dropping the event for the 200 fly.

The next-fastest seed is FIU junior Elinah Phillip, who has been a lightning-quick 22.57 in the 50 free this season to lead the conference ranks in that event.

The 2021 winner was FIU’s Jasmine Nocentini, who has since transferred to Northwestern, leaving a big hole in the team’s sprint free corps. But Gyertyanffy appears to have done a great job filling that void, especially given the fact she was swimming the 200 breast on the final day of the meet last year and not the 100 free.

Star – Christie Chue: Taking over as the top FIU breaststroker this season has been freshman Christie Chue, who is ranked first in the conference by nearly five seconds this season in the 200 breast with an elite time of 2:08.66. Chue is also the only woman sub-1:00 in the 100 breast at 59.88, with Gyertyanffy second at 1:00.69.

Star – Maha Gouda: The main thing that’s not taken into account when we look at the Swimulator’s projected score (see below) is diving, and that’s really where FIU separates itself from Rice, which doesn’t have a diving team).

Led by Gouda and Song, FIU returns a ton of diving points which should push them over the edge and past Rice at the competition. Rice has plenty of depth in the pool and should give the Golden Panthers a strong challenge, but would need several swimmers to make big drops and pull off a few relay wins to make it really close.

I think we are missing the important fact that Rice is allowed to score more swimmers than FIU. It is difficult to fathom how the scores might look if swimming was scored alone and FIU was afforded the same number of swimmers to score. FIU won every relay, and by a considerable margin to that fact. It can’t be denied that Rice has good distance swimmers, but FIU dominates in the sprint events (which again is shown by FIUs relays).

Rice will never beat FIU without divers. Which begs the question: Should swimming and diving be scored as two separate events? It seems grossly unfair that teams are essentially penalized in points by not having a dive program. Many of these programs do not have pools that can accommodate 1 and 3 meter, let alone platform. So why are these dive-less/dive-poor programs forced to compete in the dive portion, as well as swim? We are Marshall! Go Herd!

You’re asking big questions about the future of the sport.

Why should TCU be forced to compete against the University of Texas, when TCU can’t support the same number of athletes or lanes as Texas in their facility?

Should there be a minimum facility standard to compete in D1 athletics?

Or should Rice have built a facility capable of hosting all three diving events and hired a diving coach?

Geez! I don’t care? I only meant that swim and dive should be scored separately.

Don’t sleep on the Monarchs! Underrated depth and some real studs in sprint group give them an outside chance to win! Roll Mons!

I don’t think it will be close, even without the divers. FIU has three backstrokers under 54s I’m the 100, and the differential in breaststroke will be a huge advantage in the medley relays. They’ll also be heavy favorites in the 200free relay. That’s a lot of points!