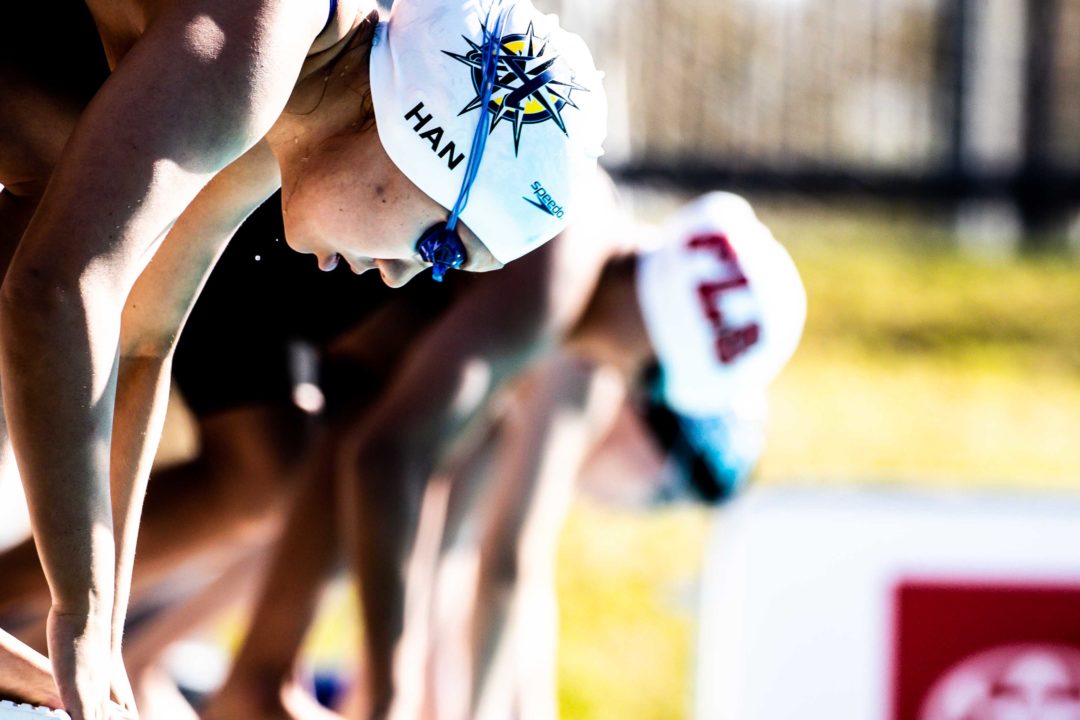 12-year-old Kayla Han posted a 4:56.86 in the 400 meter IM, the 2nd fastest 400 IM ever swam by an 11-12-year-old, directly behind Olympian Elizabeth Beisel. Archive photo via Jack Spitser/Spitser Photography

Han competed in the 200 free B final earlier in the session, posting a time of 2:05.87 for 13th place overall. She took about 1.5 seconds off her previous lifetime best from 2 weeks ago and is now ranked #8 out of the all-time fastest 11-12 year-olds in the event, behind U.S. National Teamer Justina Kozan and Olympic medalist Sippy Woodhead.

Kozan also clocked some lifetime bests on Friday, starting with a tight race with Santa Maria’s Claire Tuggle and Mission Viejo’s Katie Crom in the 200 free ‘A’ final, with Kozan ultimately taking victory with a time of 1:58.10.

.07 decided the men’s 200 freestyle final, where Gabriel Jett of Clovis Swim Club and Patrick Sammon from AquaSol were stroke-for-stroke going into the last 15 meters. Jett claimed victory with a time of 1:49.72, dropping 3 seconds from his lifetime best, obtaining the Wave I cut and missing the Wave II cut by .07.

Gator Swim Club’s Anicka Delgado took 2nd place (1:00.09) ahead of 16-year-old Sydney Lu from Pleasanton Seahawks (1:00.25). This was a new lifetime best by more than 1 second for Delgado and just under a second for Lu, both of whom cracked the Wave I cut for the first time in the event.

On the men’s side, Mission Viejo’s Mohammed Kamal dominated the 100 fly, winning the race with a time of 53.71 and 1.5 second lead over the field. He cracked the Olympic Trial Wave I cut by over one-third of a second. Ronald Dalmacio of Rose Bowl and Dart’s Tate Cutler claimed 2nd and 3rd, respectively, with Dalmacio out touching Cutler by .03 for a time of 55.37.

The final event of the night, the men’s 400 IM, witnessed another new Wave I cut from 1st place finisher Humberto Najera of Mission Viejo who posted a time of 4:24.80. The high school sophomore dropped nearly 8 seconds from his lifetime best from 2019.  This time ranks him #31 out of the all-time fastest 15-16 year-olds in the event, directly above the now-Stanford graduate Abrahm DeVine. 15-year-old Devyn Caples from Pleasanton touched the wall  in 2nd place at 4:28.19.

You see,the younger the better. Ye was 16 in London. It looks like Kozan missed her chance already 😀

I saw it on meet mobile and I leterally thought it was an error. Insane, especially from a non-distance swimmer.