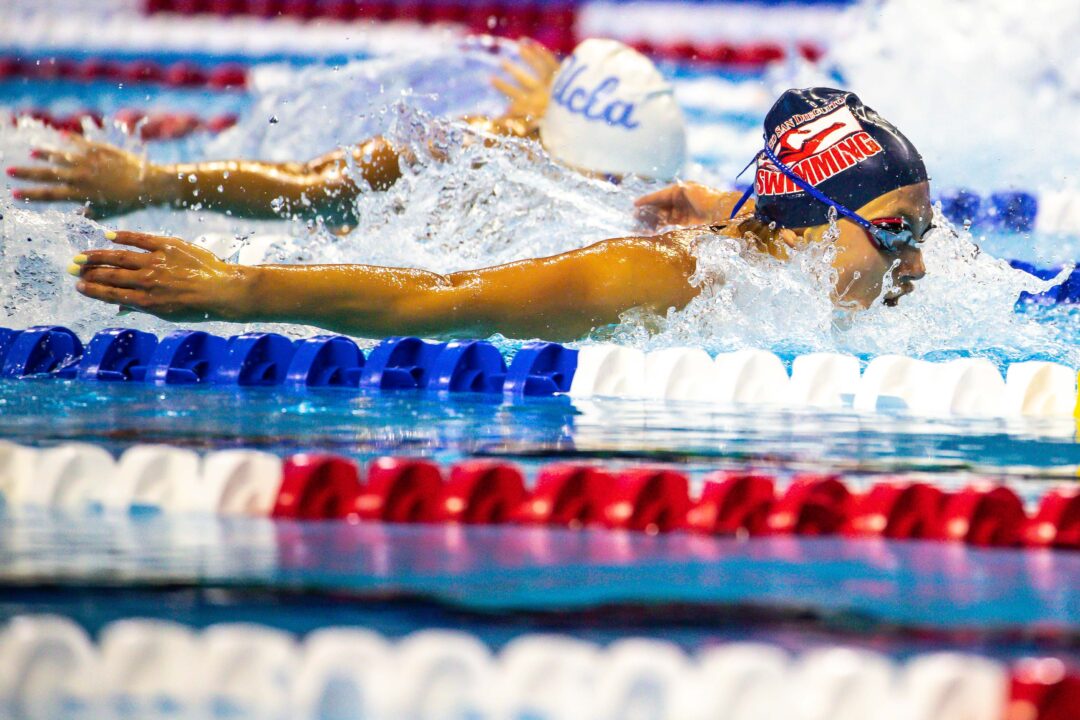 Cal commit Mia Kragh was another swimmer to post a top seed by a significant margin, swimming a 59.24 in prelims of the women's 100 fly. Stock photo via Jack Spitser/Spitser Photography

Mission Viejo’s Justina Kozan will be racing for her 3rd title of the meet tonight. Kozan clocked the top time of the morning in the women’s 400 IM earlier, cruising to a 4:47.91, 7 seconds off her lifetime best. Kozan was notable very tame coming home, which is extremely out of character for her. We’ll expect to see much more closing speed tonight as she races for a personal best and the title.

Katie McCarthy is the only other swimmer in the women’s 400 IM A final who has been under 4:50 before, and she’ll be in lane 5 next to Kozan tonight. 13-year-old Kayla Han clipped her lifetime best this morning, and will be in lane 3, also next to Kozan. 14-year-old Teagan O’Dell, who has swum extraordinarily well at this meet, is also in the heat, so we’ll be keeping an eye on her.

David Johnston was the top swimmer of the morning by far in the men’s 400 IM. Johnston finished 6th in the events at the U.S. Olympic Trials in June, so we’ll see if he can match his performance from that meet tonight. he’s already swum a lifetime best in the men’s 1500 this week, and that was another event Johnston performed very well in at Trials.

Cal commit Mia Kragh was another swimmer to post a top seed by a significant margin. Kragh was just off her recent lifetime best this morning, swimming a 59.24. She posted the top time of the morning by over a second, giving her a fairly comfortable margin tonight. A personal best from Kragh tonight would likely mean her breaking 59 seconds for the first time in the event.

Trenton Julian is another swimmer chasing his 3rd title of the meet tonight. Julian swam a 52.35 in prelims of the men’s 100 fly, touching as the only swimmer in the field to come in under 53 seconds. Julian was, yet again, conservative in his front half on his prelims swim. If he follows the pattern of his other races this week, we’ll see Julian take the 100 fly out much more aggressively tonight.

In a blistering fast A final, 17-year-old Mission Viejo star Justina Kozan won her 3rd title of the meet, clocking a 4:41.53. The time was just off Kozan’s personal best of 4:40.57, which she swam in prelims at the Olympic Trials Wave II meet in June, qualifying for the final. The race was extremely tight through the first 300 meters, with COSA’s Caroline Bricker leading at the breast-to-free turn. Kozan is in a tier of her own when it comes to closing races, however, and she was able to go from 0.97 seconds behind Bricker at the 300m, to leading her by almost 5 full seconds at the finish. Kozan split a 1:02.88 on freestyle.

Coming in 2nd was Caroline Bricker, who swam a lifetime best by more than 4 seconds to get her hand on the wall for Silver. Bricker, 16, had a personal best of 4;50.60, which she had just swum two weeks ago. Bricker used the fastest fly split in the field (1:04.14), as well as the 2nd-fastest breast split (1:20.00), to shield bookcase her worst stroke – backstroke. She was able to hold off Teagan O’Dell down the stretch. With the swim, Bricker is now the #48 all-time 15-16 girl in the event.

14-year-old Teagan O’Dell of Irvine Novaquatics continues to have the meet of her life. Her 4:46.73 marks a personal best by over seconds. O’Dell’s previous best of 4:51.46 was swum in June of this year. Unsurprisingly, O’Dell, who became the #2 all-time 13-14 girls 200 backstroker last night, posted the fastest backstroke split in the field tonight – 1:10.07. O’Dell is now tied for #10 all-time in the 13-14 girls rankings in this event, making it her 3rd top 10 all-time ranking of the meet.

Katie McCarthy of Edina Swim Club finished 4th in a new best time of 4:48.93. The swim chipped 0.20 seconds off her previous best, which she set in April of this year.

David Johnston of the University of Texas dominated the A final of the men’s 400 IM. Blasting a 4:14.80, Johnston downed his previous best of 4:16.74 by nearly 2 seconds. His previous best was swum in prelims of the 400 IM at the Olympic Trials, qualifying him for finals, where he eventually finished 6th. Johnston’s breaststroke leg was exceptional, and he opened up a huge lead on the entire field thanks to it. Also a distance freestyle ace, Johnston closed in 58.15 pulling even further away from the field.

Roberto Bonilla Flores put together an excellent back half, finishing 2nd in 4;23.66. The swim marks a personal best for the 16-year-old by 3 seconds, and makes him the #23 performer all-time in the 15-16 age group. Coincidentally, Flores bumped Humberto Najera, who was also swimming in the heat, out of the #23 spot. Najera finished 4th in 4:25.58 after keeping pace with Johnston on the first 200.

Rancho San Dieguito 18-year-old and Cal commit Mia Kragh rocked a new personal best of 58.80 to win the women’s 100 fly title. Getting out to the fastest start in the field, Kragh was challenged, but never really gave up any ground. The swim chipped just under 3-tenths of a seconds off her previous best of 59.08, which was swum just a week ago. Moreover, Kragh’s time makes her the #13 performer all-time for 17-18 girls.

Elmbrook Swim Club 16-year-old Campbell Stoll also posted a huge lifetime best, taking 2nd in 59.55. Stoll had never been under 1:00 before, and her time now makes her the #25 all-time performer for 15-16 girls. Stoll was also a member of the Elmbrook Swim Club 200 medley relay, which raced a time trial after prelims today, shattering the girls 15-18 NAG.

Patriot Aquatic Club 15-year-old Annika Parkhe swam a new lifetime best as well, taking 3rd in 1:00.15. Parke’s time bettered her previous best of 1:00.73, which she had swum just this morning in prelims. Prior to that, Parkhe’s best was a 1:00.80, which she swam 6 days ago, at the Illinois Senior Championships.

Notably, 400 IM runner up, Caroline Bricker (COSA), was back in the water racing, finishing 7th in a 1:01.69. The turnaround for Bricker between events was approximately 30 minutes, making it an incredibly tough double that she just embraced.

Trenton Julian picked up his 3rd title of the meet, match Justina Kozan. The 22-year-old Cal and Rose Bowl product swam a 51.74 to get the win tonight, touching just off his personal best of 51.70, which he swam at the Olympic Trials. Julian was the fastest swimmer on the first 50, and actually extended his lead through the 2nd pool length of the race.

It was a top 3 sweep by the Cal Golden Bears, with Dare Rose and Jarod Hatch coming in 2nd and 3rd respectively. Dare Rose posted a massive new lifetime best, dipping under 53 seconds for the first time in his career. His previous best was 53.29, which he established at the Olympic Trials Wave II meet in June. Rose is now the #25 performer all-time in the 17-18 age group.

Cal also picked up a 5th-place finish with Matthew Jensen, who tied with MWWM’s Will Hayon with a time of 53.72. Jensen’s swim came in under his previous best of 53.91, which he swam in May of this year. Hayon’s swim was also a lifetime best, clipping 0.05 seconds off his previous best.

Spencer Daily of Tritons Aquatic Club came in 4th, chipping 0.01 seconds off his personal best with a 53.65.

Irvine Novaquatics pulled out the win in tonight’s relay, running down Mission Viejo on the final leg. Teagan O’Dell got out the NOVA team out to a 2:03.88 on the first leg, and was followed by Ella Ristic in 2:00.49. Those were NOVA’s fastest 2 splits, as Maggie Schalow went 3rd in 2:07.04, and Lindsay Ervin anchored in 2:04.82.

I guess Trenton will have to be the flyer, at least on the 4×100. The 100 fly is so stacked, hard to see him trading the 200 for it individually, but he’s definitely been putting in some speed work.