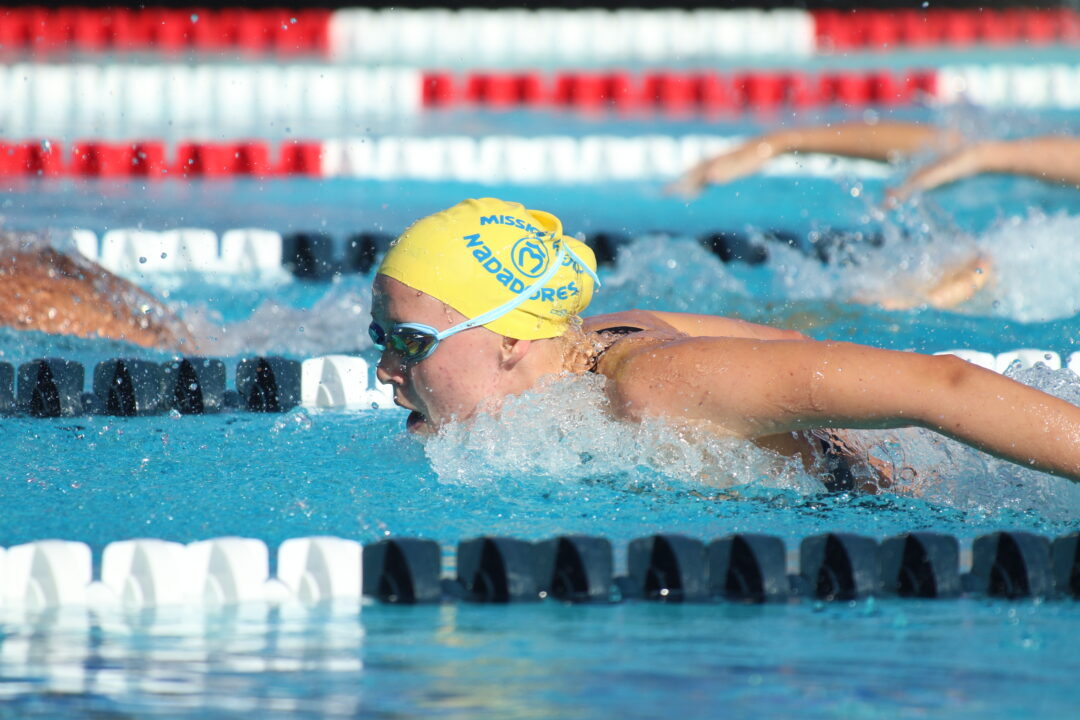 Tonight's finals session will kick off with the women's 200 free, where Justina Kozan (Mission Viejo) will attempt to win her 2nd title of the meet. Stock photo via Jonathan Reiter at 2021 US Summer Championships

Tonight’s finals session will kick off with the women’s 200 free, where Justina Kozan (Mission Viejo) will attempt to win her 2nd title of the meet. Kozan was the top seed coming into the meet with her personal best of 1:58.10, and swam the fastest time of the morning – 2:01.77. We saw Kozan drop considerably between prelims and finals in the 200 fly last night, so it seems there’s a good chance we see her under 2:00 tonight. Kozan has a tendency to close races extremely fast, so she may be right with the rest of the heat until the final 50.

Behind Kozan, are Aurora Roghair and Jillian Cox, who came in 2nd and 1st respectively in the women’s 800 free last night. Both swimmers swam lifetime bests in the 800 last night, and were just a tick off there bests this morning, so we’ll see if they drop from their prelims swims tonight. Also in this field is Autumn Haebig, who has a personal best of 2:00.55, 2nd to only Kozan. So, we’ll be looking for Haebig to make some noise from lane 8.

Trenton Julian is the top qualifier in the men’s 200 free, and is facing a double tonight. After his stellar 200 fly last night, Julian swam a 1:50.21 in the 200 free prelims, 3.71 seconds off his lifetime best. Julian was again very relaxed taking the race out, so we’ll look for a much more aggressive race tonight. He also made final in the 200 breast, swimming the event for the 1st time in 4 years.

USC’s Isabelle Odgers is the heavy favorite in the final of the women’s 200 breast. Odgers was the only swimmer under 2:31 this morning, swimming a 2:29.19. She was also well off her best time of 2:27.67, which is from the Olympic Trials in June.

AJ Pouch, a Virginia Tech swimmer representing Team Rebel Aquatics, is the top qualifier in the men’s 200 breast. Pouch swam a 2:11.69 this morning, coming in just a bit off his personal best of 2:10.35. Pouch’s 2:10.35 earned him a 5th-place finish in the event at the Olympic Trials in June.

USC’s Harry Homans is the top seed in the men’s 200 back final, with Schroeder Y’s Ziyad Saleem right behind.

Operating out of lane 8, Autumn Haebig rose from 8th this morning to 4th tonight. Haebig’s time of 2:02.11 was still well off the 2:00.55 we saw her post during Wave I of the Olympic Trials, but Haebig was still greatly improved over this morning’s swim.

NOVA and Indiana University swimmer Ella Ristic won the B final in 2:01.35.

The race was Trenton Julian‘s from the start, as he established a big lead on the field at the 100 mark. His lead would actually grow on the 2nd 100 as well, getting Julian into the wall 1.27 seconds ahead of runner-up Luke Hobson. Julian was out much faster than this morning, splitting 52.13 on the first 100, then came home in 55.70. The swim was just a tick off Julian’s personal best of 1:47.50, which he swam at the Olympic Trials in June.

Luke Hobson clocked a new lifetime best to take 2nd tonight. Hobson’s 1:49.10 clipped his previous best of 1:49.44 by 0.34 seconds. His previous best was from April of this year.

Christopher Mykkanen came in 4th tonight, swimming a 1:49.55. The swim marks Mykkanen’s first time ever under 1:50 in the event. His previous best of 1:50.08 was swum in a time trial at the U.S. Olympic Trials in June.

Isabelle Odgers swam a 2:28.23 to emerge victorious tonight, coming in just a bit off her 2:27.67 personal best from the Olympic Trials. Odgers was in control of the race from the 100 mark on, although eventual runner-up Emma Weber didn’t let her get too far away. At the East championships in Greensboro, IU’s Mac Looze won the women’s 200 breast in 2:28.13.

AJ Pouch held off a tough charge from Ben Dillard on the final 50 to win the event. Pouch’s time was a hair faster than his prelims swim, but was still off his personal best of 2:10.35.

Metroplex 17-year-old Zhier Fan just had an incredible swim to take 3rd. Fan clocked a 2:13.87, marking a personal best by over 2 seconds. His previous best was the 2:16.15 he swam in prelims this morning. prior to this meet, Fan’s lifetime best was a 2:17.29, which he swam just 2 weeks ago. That impressive last few weeks of improvement is capped by Fan now rising to #22 all-time for 17-18 boys, as just a 17-year-old.

In the C final, Roberto Bonilla Flores, a Guatemalan national, swam under the Guatemalan Record, but was DQ’d for a dolphin kick off the wall.

Ziyad Saleem got the job done in the final, holding off a charge from Harry Homans at the end of the race. Saleem was just off his personal best of 2:01.30, which he swam in November of 2020. Harry Homans was off his prelims time of 2:02.31, and further off his lifetime best of 2:01.37.

Elevation got NAG in the relay right?