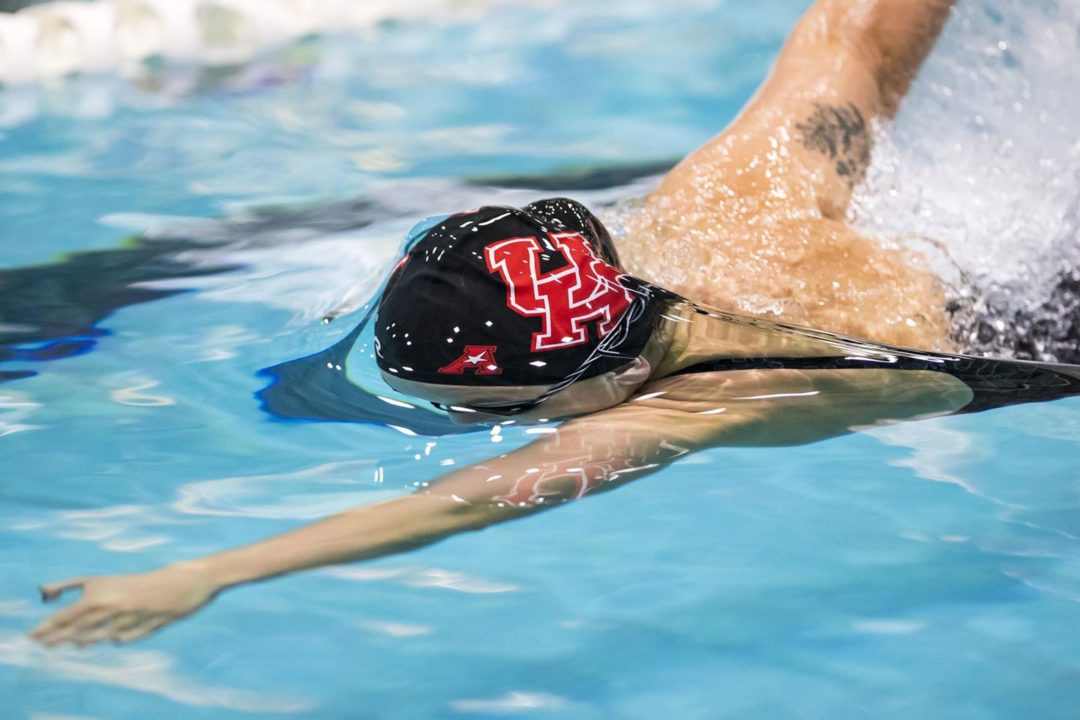 Houston women will face SMU, Cincinnati, and Tulane as they aim for their 5th straight AAC Championship title. The men's title is between SMU and Cincinnati. Archive photo via Joe Buvid/Houston Athletics

Women’s 100 Backstroke: Ioanna Sacha logged the fastest 100 back time swum in the AAC this season (53.40) during the University of Houston’s recent ‘first chance meet’ against Rice University. She is ranked first with a significant lead over 2nd seed and teammate Katie Power.

Men’s 200 IM: Southern Methodist University sophomore Colin Feehery is seeded 1st in the 200IM, just .19 off the meet record which was set in 2014 by Nolan Tesone from the University of Louiseville at 1:45.30. The University of Cincinnati’s Dominic Polling won the event last year with a time of 1:45.58, but he is currently ranked 11th going into prelims.

Women’s 200 IM: Sacha is the only swimmer entered with a tie under the 2:00 mark in this event. Her lifetime best, 1:57.23 if from last year’s AAC Championships and is less than one second off the meet record. Sacha is followed by SMU’s Gabriella Grobler who broke 2 minutes at last year’s championships but has yet to do so this season.

Men’s 100 Breaststroke:  SMU’s Caleb Rhodenbaugh won the 100 breast after a brutal battle with the Cincinnati’s Polling which resulted in a photo-finish with Rhodenbaugh outtouching Polling by .01. They may have a rematch on Monday, and Rhodenbaugh is entered with a time less than one second off the meet record set by East Carolina’s Jacek Arentewicz in 2019. Rhodenbaugh is looking to defend his 2020 title in the 200 breast as well.

Women’s Sprint Free: Houston’s Mykenzie Leehy is the defending champion in the 50 free and 100 free but this time around she has a new challenger: SMU freshman Indra Vandenbussche who is ranked first by .06 in the 50 free. The two are the only swimmers under 23 seconds, although SMU’s Johanna Gudmundsdottir is ranked 3rd at 23.00. Leehy and Vandenbussche will duel again in the 200 free where Leehy is ranked above Vandenbussche by just over 3 seconds.

Men’s 200 Freestyle: There will likely be a tight race between Cincinnati underclassmen Michael Balcerak and Hunter Gubeno and SMU’s Daniel Forndal. Their season bests are separated by less than half-a-second.

Men’s 100 Butterfly: The top three contenders in the 100 fly are all wedged between 48.10 and 48.75 with Cincinnati’s Balcerak ranked first at 48.10. He is set to battle it out with SMU’s John Easton and his own teammate Alberto Garcia who placed 4th in the event at last season’s championships.

On the women’s side, last year’s defending champion Houston is projected to have a relatively close race with SMU while also facing Cincinnati and Tulane.

Two teams that competed in last year’s AAC Championships are absent this year: East Carolina and the University of Connecticut. Both swim and dive programs were cut in the past year, and while East Carolina’s women’s program was reinstated in January they will not compete until next season.

Sacha and Leehy are projected to score the most points individually with 60 and 57 points, respectively.

SMU sophomore Nicole Stambo was a dominant force on the AAC diving boards last season, placing 2nd on 1-meter, 4th on 3-meter, and 3rd on platform. Her teammate Johanna Holloway also garnered significant points for SMU placing 2nd on platform and 3-meter. Houston’s Chase Farris won the platform while teammate Katie Deininger placed 3rd on 3-meter and 1-meter, and 4th on platform. Stambo was recently awarded the title of AAC diver of the week for scoring a career-best of 324.15 points for third place against Texas on 3-meter.

This year’s AAC Conference Championships is missing the defending men’s champions, East Carolina after their program was cut in May. Unlike the women’s program, the East Carolina men have not been reinstated. UConn also dropped their men’s swim and dive program in June. The men’s meet will be a dual between SMU and Cincinnati.

Hunter Gubeno is projected to score the most individual points (22 points) for Cincinnati while Swimulator predicts the next highest point-scorer to be SMU’s Colin Feehery with 21 points.

The men’s swimulator doesn’t make any sense, seems like maybe it’s based on a dual meet score of SMU vs Cinci? Because 22 and 21 points for the top scorers would mean a 1st and 15th or 16th place finish, respectively. Also it would mean they did not score in a 3rd event, which seems unlikely with only 2 teams and conference scoring roster limits. Going to be an interesting meet with only 2 teams, are there any recent examples of another 2 team conference championships?