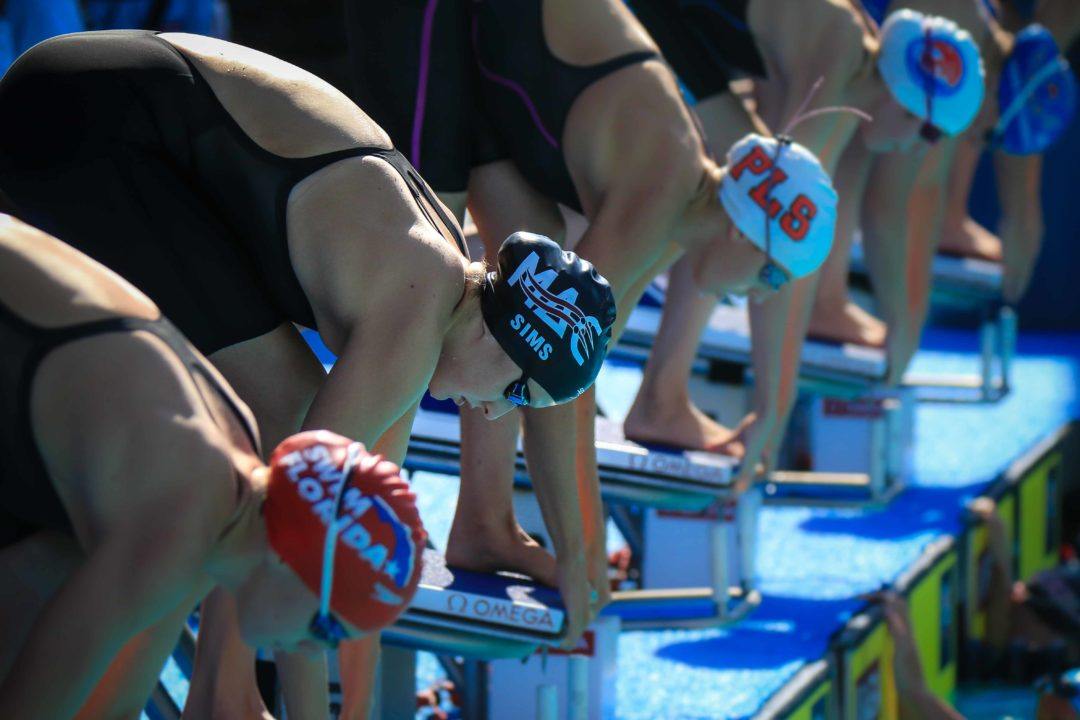 Kaitlynn Sims of Magnolia Aquatic Club has scratched the A final of the 400 free at 2019 U.S. Junior Nationals after placing 6th in prelims.

Two days after earning the bronze medal in the 800m freestyle, Kaitlynn Sims of Magnolia Aquatic Club has scratched the A final of the 400 free at 2019 U.S. Junior Nationals. Sims was entered in the 400 IM on Wednesday but did not swim prelims. She did compete Thursday morning in the 400 free, qualifying sixth for the A final with 4:19.06. Her absence in the A final will move Paige McCormick of Hudson Explorer into the A final. Seeded 14th with 4:19.31, she turned in the ninth-fastest performance of the morning with 4:20.04. Taking her place in the B final will be Mary Cate Pruitt of Irish Aquatics. She came in seeded 23rd with 4:20.21 and went 4:21.48 in heats to rank 17th. Finally, Lillianna Brooks of Denver Hilltoppers will move into the C final with her 4:22.43 morning swim that qualified her 25th. She was seeded 50th with 4:23.17.

Sims took third in this event a year ago behind Claire Tuggle and Kensey McMahon, going 4:13.37 in finals.

In the men’s 400 free, 18th-place Ian Grum of Dynamo Swim Club scratched out of the C final. Grum broke the meet record in the 200 backstroke final on Wednesday night, following up that performance with a second gold medal in the 400 IM. He went 3:59.87 in prelims of the 400 free on Thursday morning, dropping 2.5 seconds off his entry time of 4:02.22 which had him seeded 30th heading into the meet. Taking Grum’s spot in the C final will be Triangle Area Aquatics’ Mason Nyboer. He went 4:00.88 in heats to land 25th. Nyboer, too, improved his entry time this morning. He had been seeded 32nd with 4:02.30.

None of the top 24 qualifiers in the women’s 100 fly will miss finals and only Colby Mefford of Sierra Marlins has scratched in the men’s race. Mefford went 55.49 in prelims to qualify 22nd for finals. He also qualified for the B final of the 400 free, dropping 5.3 seconds to land the ninth spot overall with 3:58.94, and will swim in that final tonight. Taking Mefford’s place in the C final of the 100 fly will be Alto’s Jonathan Affeld. He went 55.62 to qualify 25th.