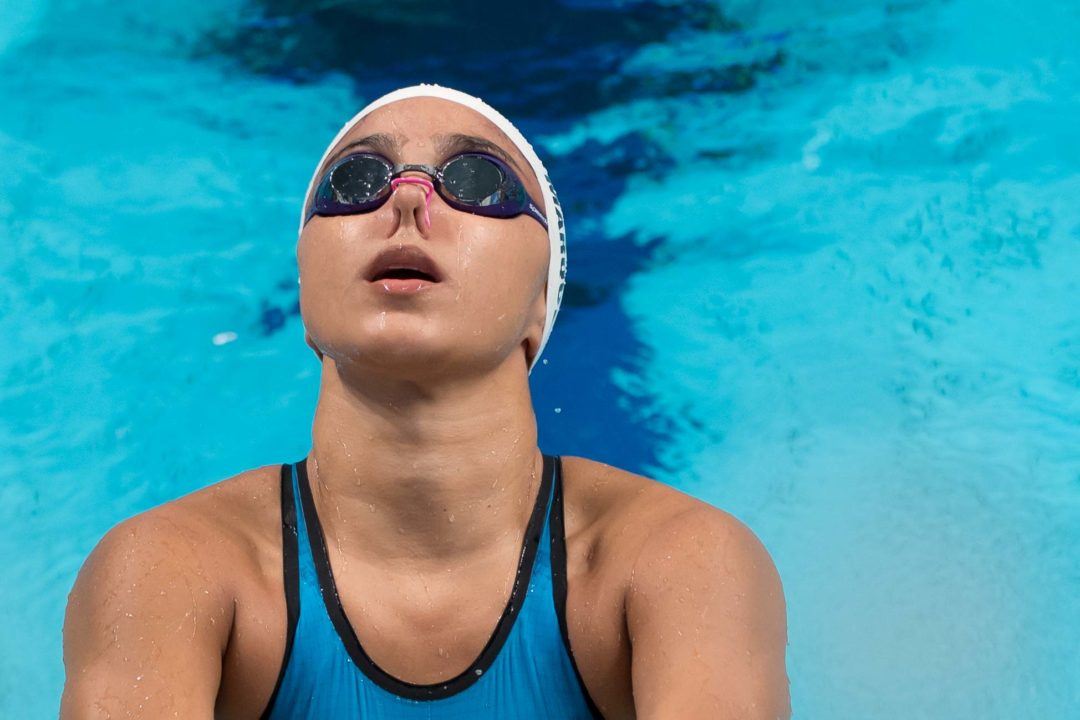 El Salvador's Celine Marquez was one of the national record breakers during day 3 prelims of the 2019 Pan American Games. Archive photo via Mike Lewis/Ola Vista Photography

First, in the men’s 100m free, 20-year-old Mikel Schreuders produced the fastest time in his career to check-in with a new Arubian National Record. Splitting 23.74/25.34 this morning, Schreuders claimed the 3rd seed in the event, ready to drop more time tonight in the final.

Entering this meet, Schreuders’ personal best rested at the previous NR time of 49.17 he notched at the 2018 Central American & Caribbean Games. There, the teen collected silver behind Trinidad & Tobagoan Dylan Carter, who will be in tonight’s 100m back final.

Moving on to the backstroke races, Celina Marquez of El Salvador produced a new national record to get her day 3 of the Games underway. The 20-year-old carried a lifetime best time of 1:04.77 from the 2018 CAC Games into this meet, but crushed that outing with a 5th seeded time of 1:01.92 this morning.

Marquez’s time was composed of 29.96/31.96 for splits, giving her a new career-fastest and NR mark well over 2 and half seconds ahead of her previous PB.

Paraguay’s Charles Hockin also produced a new National Record, punching the clock in a time of 55.53 to take the 6th seed in the men’s edition of the 100m back. Splitting 27.47/28.06, Hockin shaved .28 off of his own previous national standard that rested at the 55.81 he established at the 2017 World Championships.

Patrick Groters finished 9th and into the B-Final of the men’s 100m back, but the Aruban put up a new national record with his time of 56.20. That overtook his own previous national standard of 57.17 he notched back in 2017 at that year’s CARIFTA Championships.

Breaststroke-wise, Laura Morley slashed .29 off of the Bahaman National Record in the 200m distance this morning, hitting the wall in 2:30.21. That was enough to surpass the old national record of 2:30.50 established by Margaret Higgs at this year’s World Championships in Gwangju.

Finally, an Argentine swimming record went down courtesy of Gabriel Morelli in the men’s 200m breast. Owning the previous record in 2:14.08, Morelli got under the 2:14 threshold for the first time of his career in 2:13.64 to capture the 6th seed in tonight’s final.

Goeij 200 back yesterday was a new South American record