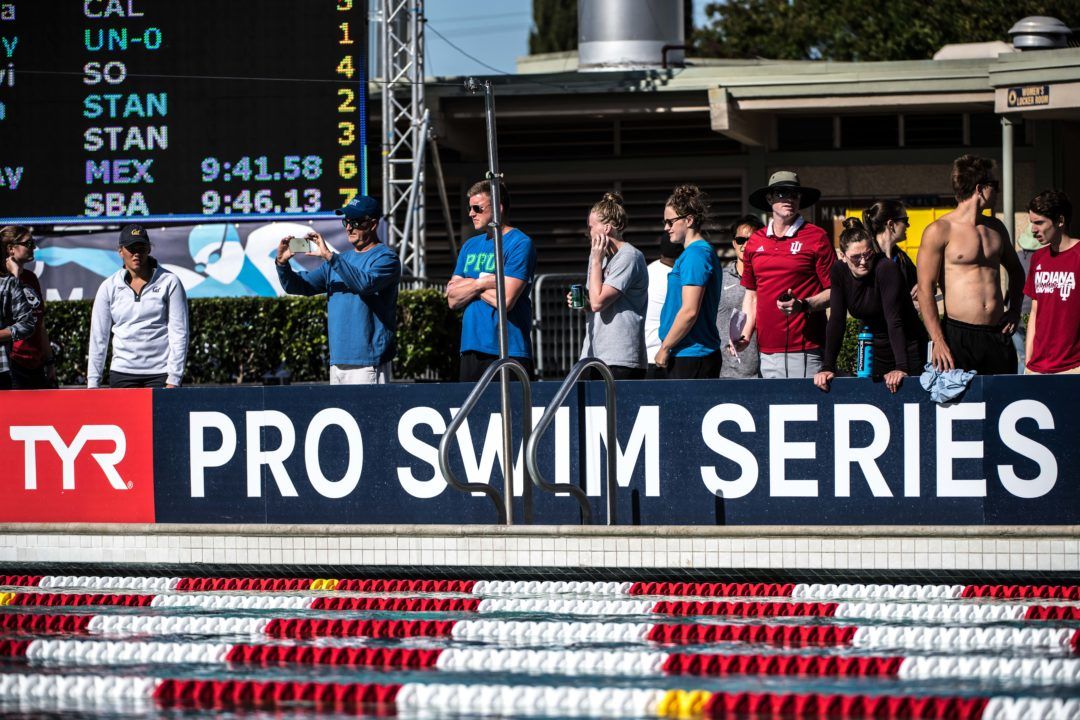 One male and one female swimmer will earn a $1500 bonus based on having the best prelims swim by FINA power points. Archive photo via Mike Lewis/Ola Vista Photography

Included in Tuesday’s release of the 2019 TYR Pro Swim Series schedule, USA Swimming announced that prize money will increase significantly, and there will be one added prelims swim bonus for each gender.

“At each meet, $1,500 will be provided for a first-place finish, $1,000 for second and $500 for third. In addition, the athlete (one per gender) who has the highest scoring prelim swim, in Olympic events only, based on FINA power points, at each TYR Pro Swim Series Meet, will win an additional $1,500.”

As the release states, the biggest potential monetary increase is the prelim swim incentive based on calculated FINA power points. FINA points are calculated based on a pre-determined “base time” for a given event, which are set each year in accordance with the most recent FINA-ratified world record in the event.

FINA uses the formula P = 1000 * ( B / T )3  to calculate the score, meaning the better the performance, the more its points rise above 1000. The statistic essentially standardizes performances, allowing for swim-to-swim comparisons.

Additionally, at the conclusion of the series, a swimmer of each gender with the highest single-event FINA score will earn a 1-year lease of a BMW. In the past, the lease has gone to the swimmers with the highest series point total overall; the move appears to give more of a fair chance to specialists who can excel at one event without winning multiple. Previous iterations of the series also included a $10,000 bonus to the series points champions. There’s no mention of that prize on USA Swimming’s press release; we’ve asked USA Swimming if series points and the $10,000 bonus have been removed from the 2019 program, but haven’t yet received a response.