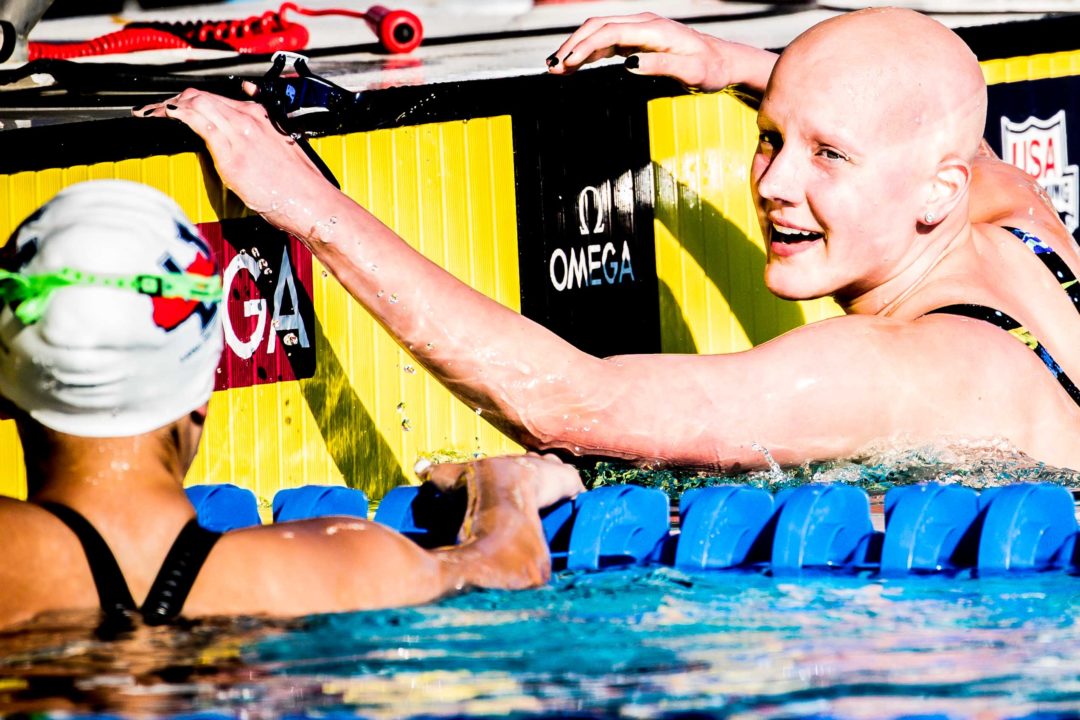 Leah Hayes finished second in the women’s 200 IM at the 2019 Speedo Junior National Championships. She was only 0.36 seconds off of Franklin’s NAG record.

15-year-old Justina Kozan broke two minutes tonight to win the 200 free. She was the class of the field, untouchable down the final length of the pool.

The final session of the meet will feature the 200 IM, 50 free, women’s 1500, men’s 800, and the 4×100 medley relays. This morning, 13-year-old Leah Hayes lit up the pool in the women’s 200 IM, qulaifying first for tonight’s final and swimming the 2nd fastest time ever in the 13-14 age group nationally. She’ll look to repeat that swim tonight, and potentially win her first ever junior national title. Tim Connery was in the top 10 all-time for boys 15-16 in the 200 IM this morning.

Juli Arzave leads a tight field in the fastest heat of the women’s 1500 tonight, while men’s 1500 champion James Plage is entered with a pretty big cushion between himself and the rest of the fastest heat. Hunter Armstrong will look to capitalize on his lifetime best in the 50 free this morning, which earned the top seed for tonight by a big margin. Emma Wheal is the top seed in the women’s 50 free, with Cora Dupre right behind her.

In a tight race, 15-year-old Justina Kozan of BREA Aquatics ran down 13-year-old Leah Hayes on the final 50 to win the junior national title in 2:12.74. It was Tristen Ulett (Dynamo Swim Club) who had established the lead at the halfway mark, splitting 1:01.90 at the 100 to lead by over a second. Hayes took over on the breast leg, splitting a 39.09 to lead the field by over a second with 50 meters to go. Kozan turned it on in a big way on the last 50, however, tearing home in an absolutely stunning 29.15, which massively outsplit Hayes’ 30.89. To give context for just how fast that freestyle split is, the fastest free split in the women’s 200 IM final at the World Championships a few weeks ago was 30.28. Kozan and Hayes were the only swimmers in the field to split under 31.5 coming home.

Top seed Tim Connery of SwimMAC Carolina turned 4th at the 100 mark, but put together quick breast and free splits to take the lead by the end, finishing in 2:02.. Connery was off his morning time of 2:01.58, but still managed to win the junior national title. Zach Hils of Lexington Dolphins took the lead on the backstroke leg thanks to a speedy 30.77 split, and held the lead through breaststroke. Hils had an explosive breast to free turn, and led for the first 20 or 25 meters of freestyle before Connery really turned it on and started to battle him.

Mason Manta Rays’ Ansel Froass was 8th at the halfway mark, but posted the a very fast 34.80 on the breast leg to put himself in 6th, then came home in 28.97 to battle all the way to 3rd. He just narrowly got his hand on the wall before SwimMAC’s Baylor Nelson, who was 4th in 2:04.00.

15-Year-Old Sophia Karras from Long Island Aquatic Club broke away from the pack early on in the race, and built a large lead over the field by the end of the race. Karras held steady with mid-33 second 50 splits for the vast majority of the race, touching the wall in 16:39.40 to break the 16:40 mark for the first time in her career. That swim also puts the 15-year-old 58th all-time for 15-16 girls all-time. Summer Smith and Juli Arzave battled for 2nd place, with Smith slightly outsplitting Arzave consistently during the last couple hundred yards.

In an incredibly tight finish, Mason Manta Rays’ Cora Dupre got her hand on the wall just .01 seconds ahead of Emma Wheal (Western Hills Athletic Club), and .03 ahead of Lindsay Flynn (Aquatic Team of Mecklenburg). Both Dupre and Wheal were slightly off the times they posted this morning, while Flynn bettered her time. 14-Year-Old Zoe Skirboll of Racer X Aquatics swam a 25.94 to place 6th. That time was a personal best for Skirboll, and makes her the #9 performer all-time for 13-14 girls nationally.

Canton City Schools’ Hunter Armstrong, a West Virginia recruit, remained the only swimmer to crack 23 seconds today, winning the race in a new personal best for the 18-year-old. Armstrong’s 22.57 this evening is only his 2nd time under 23 seconds, with the first being his 22.74 this morning. He came into the meet with a time of 23.37, marking a .80 second drop, which is very large for a 50. Armstrong’s time also ranks him 14th all-time for 17-18 boys nationally. Matt King of Bellevue Club Swim Team came in 2nd with a 23.04. King has a personal best of 22.81 in this event. Dynamo Swim Club’s Brooks Curry narrowly got his hand on the wall before August Lamb (Cavalier Aquatics), 23.14 to 23.17. Curry placed 3rd.

James Plage, a 16-year-old out of AquaBears, completed his sweep of the men’s distance events after winning the 1500 earlier this week. Plage was out like a bullet, splitting 55.70 on the first 100 to break away from the field very early on. Plage never looked back after that, controlling the lead from start to finish. He was 3:57.88 at the 400 mark, and held his average pace under 1:00 per 100 through the 500 mark. The swim marked a best for Plage by about 4 seconds, and now ranks him 14th all-time for 15-16 boys nationally.

Cole Kuster (Purple Valley Aquatics) grabbed 2nd place after posting the fastest time out of the early heats. Kuster’s time from this afternoon was 8:07.61, which was only best by Plage in the fastest heat. Kuster’s swim was a persoanl best by over 10 seconds, as his previous best was 8:18.26. Brendan Driscoll (Unattached) came in 2nd in the fastest heat, but was 3rd overall.

14-Year-Old Rye Ulett got Dynamo out to an early lead with her 1:02.00 backstroke split. While that time is off her personal best of 1:01.06, it got the job done in giving Dynamo a lead. Her older sister, Tristen Ulett, posted the fastest fly split in the fastest heat, 1:00.33, to help keep Dynamo in the lead. The Ulett’s splits combined with a quick breaststroke split from Alicia Henry (1:10.96), and a 56.75 from Abby Pilkenton to anchor, placing Dynamo 1st by exactly 1.5 seconds.

Dynamo swept the relays tonight, posting a 3:44.00 to win the men’s medley relay. They battled hard with Sierra Marlins through the race, with a few lead changes occuring. Ian Grum led off for Dynamo in 55.85, compared to 57.38 for Sierra Marlins’ Colby Mefford. Ben Dillard then threw down a 1:02.05 for Sierra Marlins on tghe breast split, with Dynamo’s Quinn Harron splitting 1:04.26. Sierra Marlins held the lead at halfway, and little changed on fly where Jonah Harm (Sierra Marlins) split 54.57, and Cam Auerbach split 54.48. Brooks Curry got it done for Dynamo, anchoring in 49.41, whileFinn O’Haimhirgin anchored Sierra Marlins in 50.19. The time for Dynamo set a new 17-18 boys National Age Group Record.

I expected a great battle between Justina Kozan and Leah Hayes. And the race did not disappoint. Race of the meet so far.
Both girls have different strengths. Kozan well ahead after fly. Hayes takes the lead after backstroke and expands her lead on breaststroke. But then a monster 29.15 on freestyle for Kozan who wins in 2.12.74. Hayes second in 2.13.06. Big new PBs for both girls.

That closing split for Kozan was insane.

I compare both girls. When I say Kozan well ahead I mean well ahead of Hayes. When I say Hayes takes the lead I mean the lead over Kozan.
Hayes is now very close to Missy Franklin’s 13/14 NAG record of 2.12.73.
Kozan is now the 10th fastest 15/16 US girl ever.
And they are 13 and 15 so still plenty of time to improve in that age category.