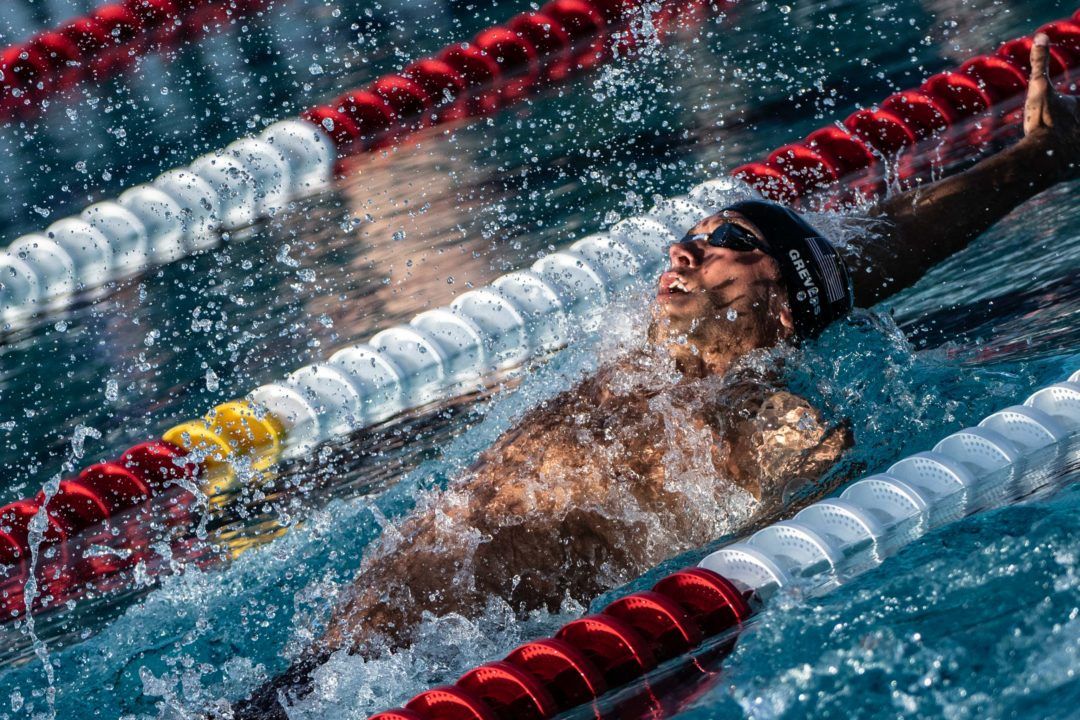 Matt Grevers didn't let being on the "wrong" side of 30 stop him from throwing down three fast 50 backs tonight at the 2018 PSS Mesa stop. Current photo via Mike Lewis/Ola Vista Photography

When we polled our readers after the new Pro Series Swim format debuted in Austin back in January, almost half of the respondents indicated that they liked the new 50s shootouts the best.  Through the second iteration of the full new format, the shootouts still seem to be the most successful part.  With Jason Lezak (jokingly?) offering $10,000 for one of the Lezak Squad backstrokers to show up in Mesa, a mixed medley relay that also seems to be struggling for particpation, and a mystery IM that while fun, isn’t enough to keep big names around another day, the stroke 50 shootouts again seemed to be the most enjoyable part of the new lineup.

And while Americans in general tend to focus on the Olympic events, which don’t (yet) include 50s of anything other freestyle, the shootout format provides swim fans a chance to see some of the big names in swimming race three times in a matter of minutes, something that’s sure to bring attention to these events.

Obviously, the biggest thing to come out of tonight was Olivia Smoliga‘s American Record in the 50 back, which goes to show how the thrill of head-to-head competition can bring out the best.  Not only that, but narrowing the field down to just swimmers also helps overcome one of the common complaints about stroke 50s at the international level — it’s just too darn difficult sometimes to figure out who’s winning a 25 second race when it’s tough to decide whose arms belong to who.  Instead, we got to see a little more easily just how Molly Hannis stays on her breaststroke, or compare Michael Andrew’s and Nathan Adrian‘s techniques side-by-side.

Tonight, the common theme we heard throughout the post-race interviews was just how much fun the shootouts are for the swimmers.  And while it’s great to see a swimmer primed for one great big swim in an evening and deliver a world record time, the shootout 50s do remind us of the joys of being a kid and racing a sibling or a friend in a neighborhood pool time and time again, where the only thing that matters was getting your hand on the wall first.

If they add the stroke 50s to the olympics they should do it in this format.

And make the 50 an endurance event?? Hell nah, the point is exactly to find out who’s the fastest crossing the pool… if you want to know who can take more pounding just watch the 200/400