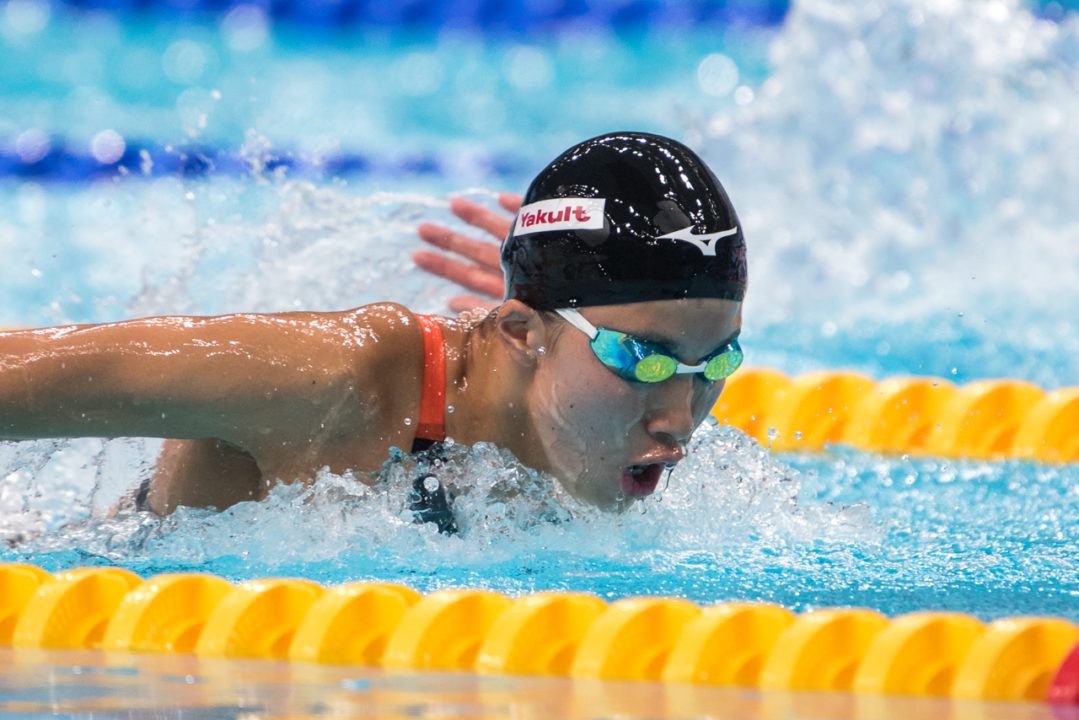 Yesterday's standouts Rikako Ikee and Daiya Seto were back in the pool today, as was Olympic gold medalist Kosuke Hagino on day 2 of the 2018 Japan Swim. Archive photo via Peter Sukenik/www.petersukenik.com

Day 1 of the 2018 Japan Open saw fireworks to the tune of a new 50m fly national record for Rikako Ikee along with a world-leading 400m IM time from birthday boy Daiya Seto. Although day 2 was a little more quiet. a few notable swims were in the mix as swimmers vie for the final spots on the Pan Pacific, Asian Games and Junior Pan Pacific rosters.

17-year-old Ikee holds her nation’s 200m freestyle record in both LCM and SCM, with the former sitting at the 1:55.04 she notched in February of this year at the Konami Open. That mark still sits as the 3rd fastest time in the world, quite a feat considering the Commonwealth Games already took place.

Ikee was well off that mark tonight, but still produced a solid winning 200m swim in a time of 1:57.25. She had several teammates gunning her down in the final stretch, as the next 3 swimmers all finished within .60 of a second behind her. Chihiro Igarashi managed to come up with silver in 1:57.48, while Rio Shirai was next in 1:57.68.

The 4th place finisher tonight was Tomomi Aoki in 1:57.85, to give the Japanese nice-looking 4x200m freestyle relay options for the Pan Pacific Championships. Of note, 5th place in the race belonged to Nagisa Ikemoto, born in 2002, who notched a time of 1:59.97 to dip under the 2-minute threshold for the first time in her young career.

Japanese IM queen Yui Ohashi was in the pool tonight, doing her thing in the 400m distance where she came away with gold in 4:35.03. The 22-year-old 200m IM silver medalist at the 2017 World Championships already holds the world’s fastest time in this 400m IM event this year with the 4:30.82 posted at the Japan Swim just last month.

Behind Ohashi tonight were Miho Takahashi and Sakiko Shimizu who touched in times of 4:38.57 and 4:38.58 for a close 2nd and 3rd, respectively.

Another big name in the Tatsumi International pool this evening was Kosuke Hagino, trying out the 200m freestyle for the first time in several months. The 400m IM Olympic champion was set to swim the event at last month’s Japan Open, but bowed out in order to focus on the IM events, for which he qualified for the Pan Pacs roster.

Hagino fell just shy of the gold in tonight’s 200m freestyle, however, as Katsuhiro Matsumoto got his hand on the wall first in a time of 1:47.62. Hagino finished in 1:48.02. Matsumoto has already been named to the Pan Pacs squad, courtesy of his wicked-fast 1:45.93 last month. That time marked a huge personal best, overtaking his old career-fastest of 1:47.42 lead-off on Japan’s non-medal winning 4x200m freestyle relay at the 2017 World University Games in Taipei.

Are you forgetting about Canada? Japan has Ikee, but Canada has Ruck and Oleksiak.

Look up the times the Japanese has put ….than answer later

Manuel said in her interview she would love to be on the relay. I’m sure Comerford wants that second spot.