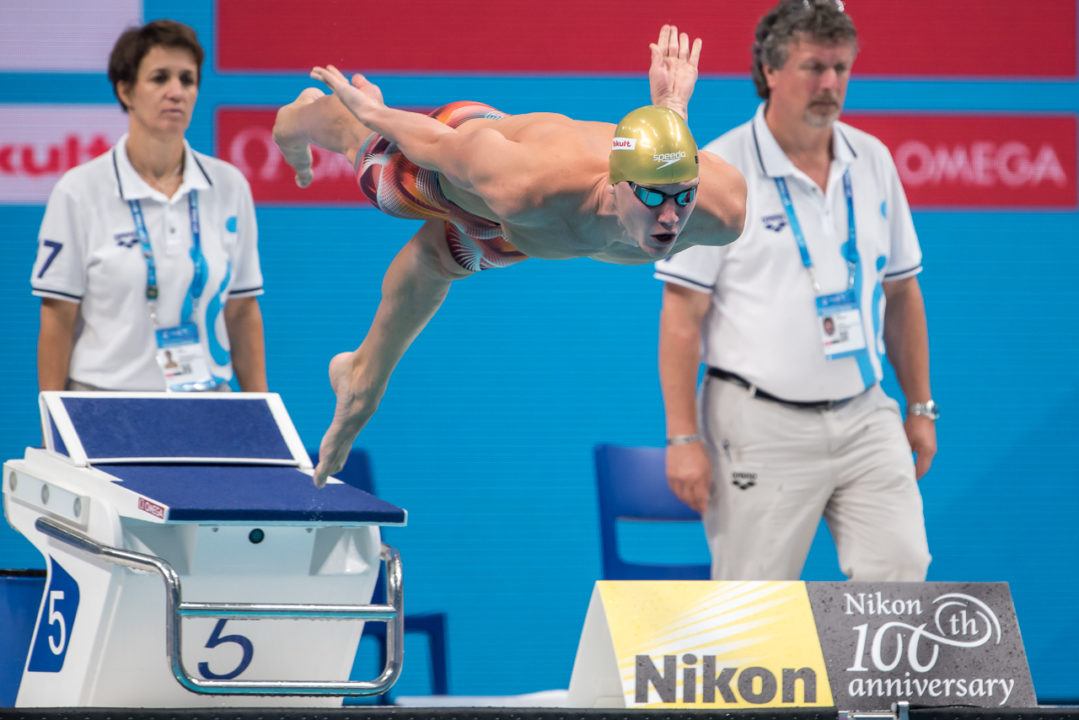 Although Kazakhstani Olympic champion Dmitriy Balandin is physically in Jakarta, he is missing from the men's 200m breaststroke start lists for the 2018 Asian Games. Archive photo via Mike Lewis/Ola Vista Photography

Although China and Japan continue to dominate the overall swimming medal table, smaller nations with standout swimmers are starting to race into the spotlight. The Singaporean men’s 4x200m freestyle relay, for example, launched itself onto the bronze medal podium on day 2, with the help of star Joseph Schooling, earning its first swimming medal of these Games.

For tomorrow, Tuesday, the nation of Korea has a couple of medal chances on the women’s side with An Sehyeon and Kim Seoyeong both entering the water for their respective events of the women’s 100m fly and 400m IM.

I want to see a WR 2breast. Whether or not it’s here or 2019 WC that we see it go down or even some nationals meet, 2020 will be one of the deepest fields in history. You can expect Haiyang, Balandin, Koseki, Watanabe, Prenot, Chupkov, pretty much one of 6 other Americans and probably some new guys emerging by 2019

Probably would have been good to mention the 2 aussies that beat all of the Americans including prenot at pan pacs….. both are 18 and 19..

It’s good for the Aussie’s that these two kids are stepping up to fill the shoes for a long time since Sprenger. Hopefully by Tokyo they’ll have what it takes to win in a tight field.

Interesting. Because he is entered in both 50 and 100. If it is not clerical error, then maybe he is confident he has the fitness to medal in 200?

Edit: then maybe he is *not* confident he has the fitness…