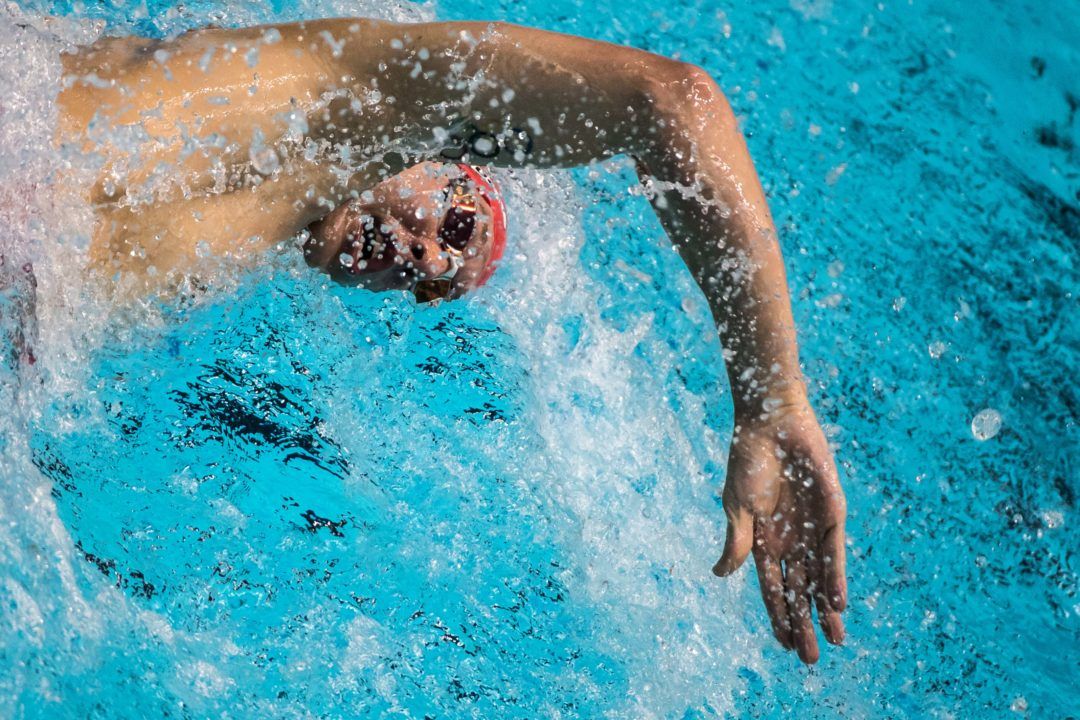 Established IM stars like Kosuke Hagino and Chase Kalisz will be among those vying to fill the void left by the absence of the two men who have won the last seven world championships in the 200 IM. Current photo via Mike Lewis/Ola Vista Photography

Less than an year after Michael Phelps earned a gold in this event and became the first man to win four straight individual swimming Olympic championships, the 200 IM is pretty wide open.  Eight men come into the meet with qualifying times of 1:57.5 or faster, whereas only five men were at or under that mark headed into Kazan two years ago.

Japan’s Kosuke Hagino sits atop the psych sheet with a 1:55.07, but the real story of this season has been Philip Heintz of Germany.  More or less out of nowhere, Heintz blasted a 1:55.76 at the German championships, making him the 8th-fastest performer ever.  To give that a little more context, note that only Phelps finished under 1:56 , meaning that Heintz’s time would’ve earned him the silver medal had he done it last summer.  Heintz lopped nearly two seconds off his time from Rio with his swim from June, so there’s a big question as to whether or not he can repeat this time.  If he does, he’ll almost certainly earn a medal of some color.

The only entrant who’s been faster than Heintz is Hagino, who sports a lifetime best of 1:55.07 and is the reigning Olympic silver medalist.  Granted, Hagino’s time in Rio (1:56.61) was over 1.5 seconds off his personal best, but he’s been looking good all season after elbow surgery last fall.  Barring injury or illness, Hagino should easily medal, and if he’s at his peak, it’s hard to imagine anyone pushing past him.

Wang Shun of China is another veteran in this event, and sits third on the entry list with a 1:56.16.  He has plenty of international experience and was the bronze medalist in this event at both the 2015 World Champs and the 2016 Olympics.  His seed time comes from Chinese nationals this April, where he set a new national record in this event.

Two Americans come next on the psych sheet, and it’ll be their first world championships in this event for both of them.  Chase Kalisz has plenty of international experience, having earned silver or bronze in the 400 IM at the last three major worldwide long course events.  It’s no surprise that he’s making the move to the shorter event — he placed 5th at the 2012 Olympic Trials, and used to train alongside Phelps.  It’s also reasonable to suspect that he wasn’t fully tapered at the USA World Champs Trials last month, as he had a pretty big margin of error in the 400 IM, so he could be primed for a good drop in this event just a few weeks later.

Seeing Abrahm Devine pip the rest of the field at the USA Trials was much less expected, as the college swimmer lopped a couple seconds off his best to become only the 5th American to ever break 1:57.  Anything close to what he did at Trials will be enough to get him into the final, but he’ll need to drop more time to have a shot at a medal.

Switzerland’s Jeremy Desplanches sits fifth on the psych sheet with a 1:57.40. He was on fire earlier this spring, as he lowered the national records in both the 200 IM and 400 IM by sizable margins, and he has international experience, having made semifinals in this event in Kazan and Rio.

Qin Haiyang of China and Daiya Seto of Japan come in with identical seed times of 1:57.54.  Qin (also known as Tan Haiyang) set a new junior world record with that time this spring at the Chinese National Championships, although that has not been officially ratified by FINA.  If/when ratified, that’ll knock over a second and a half off the previous mark, done by Michael Andrew of the United States.

Seto, meanwhile, has multiple international medals in the 400 IM and has competed in this event at the last two world championships.  Seto recently turned professional, and has been looking strong all season.  He had a disappointing world championships two years ago in Kazan, will be looking for redemption this week, and given how open this event appears, he could easily sneak in for a minor medal.

The gap widens pretty quickly after the top eight.  A pair of British swimmers, Max Litchfield and Mark Szaranek, come in with seed times in the 1:58-low range.  Szaranek tied for first in this event at the short course NCAA championships this spring.  Another college standout, Greece’s Andreas Vazaios, had a great season with NC State, and sits between Litchfield and Szaranek with a 1:58.18.

Darkhorse: Alexis Santos of Portugal is the only swimmer we haven’t mentioned whose seed time is under 1:59.  His time of 1:58.88 from the Portuguese Nationals this year is about eighth-tenths of a second faster than his prelims time from Rio, where he was good enough to make semis.  With big meet experience under his belt and a sizable drop, he jump up and grab a spot in the A-final.

Why is it predicted that Chase Kaliz adds a second? The article mentions that he is poised to drop time.

Heintz is probably someone who fully tapered for German Nationals.