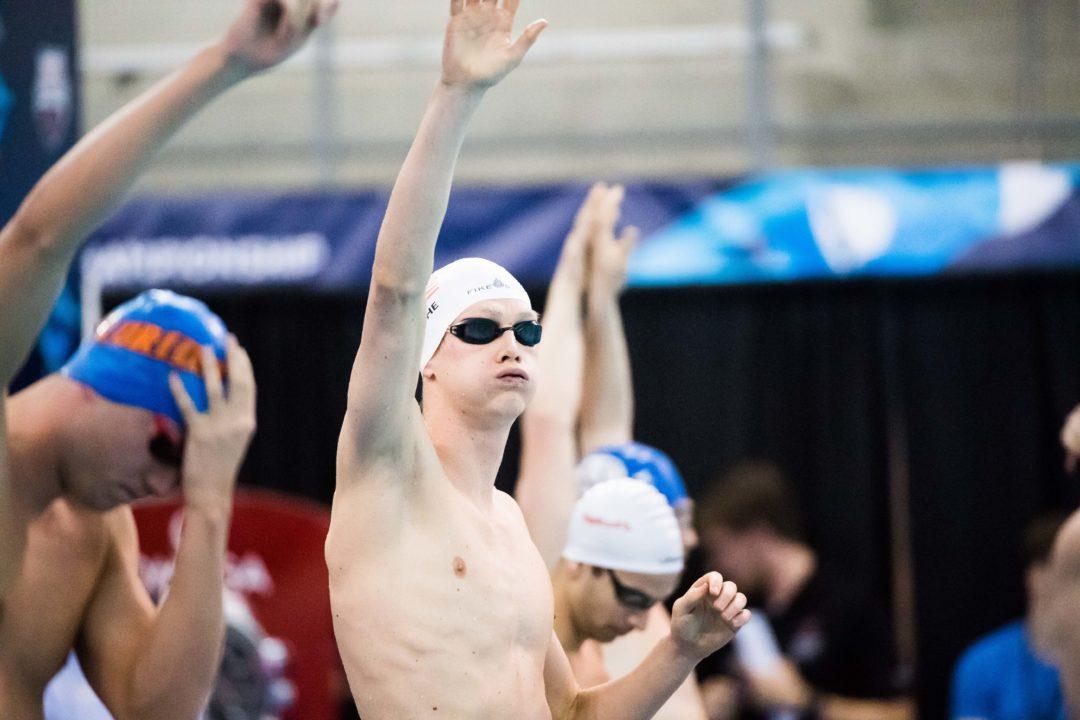 A late-breaking entry for the award, American swimmer Zane Grothe had his big break-through at 25 years old when he broke the American and U.S. Open Records in both the 500 and the 1650 yard freestyle at the US Winter National Championships in the waning days of November and into December. Archive photo via Mike Lewis/Ola Vista Photography

A late-breaking entry for the award, American swimmer Zane Grothe had his big break-through at 25 years old when he broke the American and U.S. Open Records in both the 500 and the 1650 yard freestyle at the US Winter National Championships in the waning days of November and into December.

There was a long buildup to these swims. Grothe swam a 3:44 in the 400 free at the US World Championship Trials, making him the 7th-fastest American in the history of the event. There were also some benchmark out-of-season swims that built some tension too, and some reports of insane workout swims. He wound up 7th in the 400 free at the World Championships and 8th in the 800.

Grothe swam as an undergrad at Auburn, but now trains at the post-graduate group based at Indiana University in Bloomington. What really gives his story the proper emotion for a ‘breakout’ is how long he’s fought to get his moment. After his record-breaking swims in Columbus, he told SwimSwam reporter Coleman Hodges that he was ready to retire when he came to Indiana.

The build will continue in 2018. With the addition of the men’s 800 free to the Olympic schedule, Grothe gets a little more motivation to persevere until Tokyo: the 800 is probably a better event for him than the 1500, his recent mile swim in yards not-withstanding. 2018 he’ll swim at the Pan Pac Championships, a lower-key international meet. The primary focus will be ensuring he qualifies for the 2019 World Championships team (which will be decided next year), but it will also be a chance for him to take the next step and get on an international podium in an individual race – Australia’s Mack Horton and American Clark Smith will be his primary competition in those races. That will build into South Korea, and then, if everything goes right, Tokyo and a chance at Olympic hardware.

As my coach always said to me – the key to a good breakout is building on the momentum from the start. Grothe has gotten his breakout, now is when we’ll find out how he builds on it.

Milák is the man.

Yet to prove himself on the world stage against the big guns with that awful stroke.
See what 2018 provides against Sun Horton & co.

I recall that Vladimir Salnikov had a poor stroke and no streamline whatsoever. I guess we’ll see, Aussie, what Zane does, and we’ll see what you say in 2020.

Abraham Devine could get a shout-out.
Michael Andrew, hyped as ever, made his first serious impact on the world level.

Also: Caeleb Dressel. Easy to forget, he only had 2 events in 2016, and in the better of the two he finished 6th at the Olympics.

Yep, Dressel is the real breakout swimmer of the year. Very impressive improvements.

He swam the final in Lane 1, apart from his main competition (Haas and Smith) in the center of the pool. He made his move on the 3rd 100, and then pulled away for the win. He was now the top USA middle-distance free swimmer.

Grothe’s long course swims this year were good, and his yards swims were exceptional. However there’s more to breaking out than just times, placing in big competitions is a huge factor. When it came to the world champs Grothe was a bit disappointing i.e. Swam slower than he did at trials and definitely off where many of us thought he was capable of being (although that’s a matter of conjecture so I’ll leave that out of the argument.

Kolesnikov broke multiple WJRs in short course and long course in impressive times, however I believe breaking out is about the senior level far more than the senior level so while this is impressive doesn’t necessarily lift him above Grothe alone. However… Read more »

Zane grothe did good this year but long course swimming carries more weight. It would be great if zane grothe,s times carries over to the big pool.
I think kristoff milak takes this.
Kliment kolesnikov,s times will likely transfer into the big pool.

His 500 and mile were about as quality as Milaks 50.6 and Kolesnikov WR in 100 back. But I probably would have picked Milak

His American record short course is no where near the level of a sc meters world record. Grothe’s swims were impressive yes, but they still would not have come close to either the scm 1500 record by paltrienri or the 400 record which I believe is held by agnel.

For kolesnikov to break a record in a scm competition which is not US only (although was held by an American) is incredible for a 17 year old.

Milak and kolesnikov both medaling at senior international competitions (lc worlds and sc euros as well as a 4th place in Budapest) automatically should put them above Grothe.

Why is a scm record any more impressive than a scy record? Grevers set that wr like 6 years beyond his prime. More talented swimmers have done scy than scm

just look at Grothe’s records and comparable SCM records. The 400 by Agnel, the 800 by Hackett, and the 1500 by Paltrinieri – all swimming greats and more talented than anyone to have done SCY. Yes some areas SCY is as good or better than SCM, such as Ledecky or Dressel, but a SCM WR is huge

Because while yes, less swimmers compete in SCM than LCM, only one country on the planet competes in SCY. While Grothe’s records were impressive, they are lessened by the fact that such a large proportion of his competition have never competed in that setting.

Not really true, lots of top international swimmers compete in SCY as they attend NCAA universities. The NCAA championships is a truly world class meet and arguably “faster” than any SCM meet, with the possible exception of SCM Worlds. I agree that the SCM records are likely “on average” at a higher level than the SCY records, but it’s hardly black and white.

Bit of a home-favorite pick