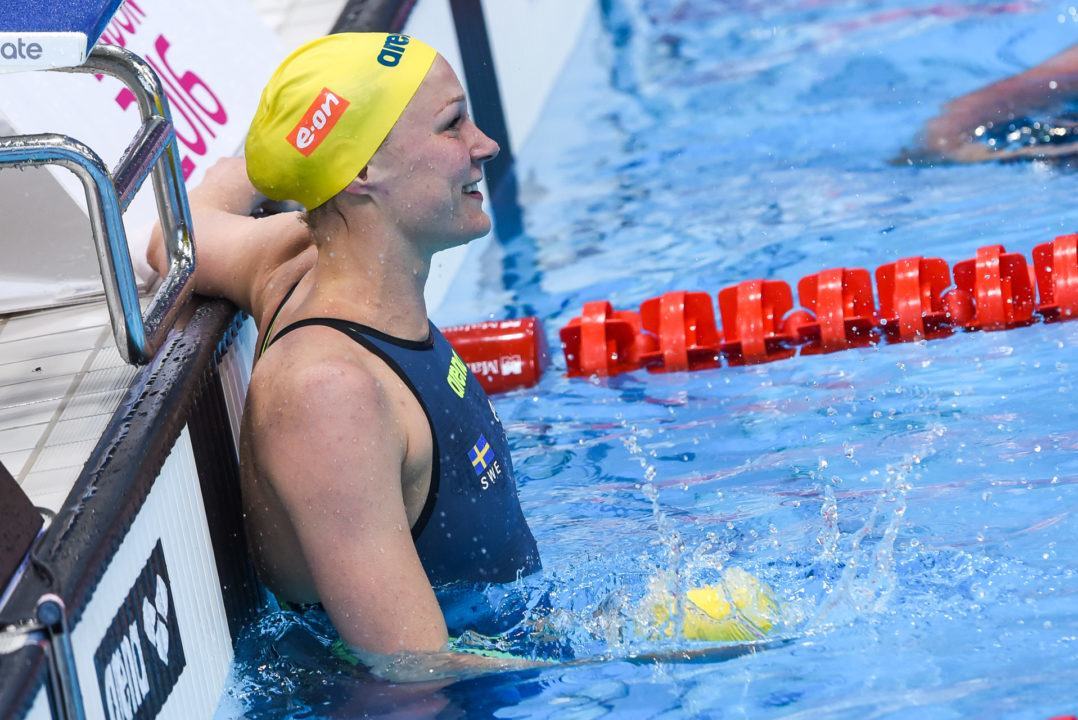 After a preview of battles to come from this morning’s heats, several races tonight lived up to expectations with such big names as Sarah Sjostrom, Katinka Hosszu, Cameron McEvoy and Yasuhiro Koseki in the house. The morning races were on the quiet side times-wise, save a couple of individual standout swims such as Sjostrom’s sub-58 100m fly and Andrei Nikolavev‘s 50m breaststroke meet record, but that changed with money on the line.

Japan’s Koseki settled for the 2nd seed in the men’s 200m breaststroke after this morning’s heat, but made his move in tonight’s final to overcome Russia’s Kirill Prigoda. Splitting 1:02.96/1:06.53, Koseki scored a winning time of 2:09.49 to clock the only sub-2:10 outing of the field. Prigoda knocked over 3 seconds off of his morning swim to snatch up 2nd place tonight in 2:10.19.

The women’s 100m breaststroke saw 2016 Olympic silver medalist Yulia Efimova, who now represents her own team, take the event in a swift 1:06.45. Although off her #2 time in the world of 1:05.90 from Russian Nationals, her outing was enough to put a comfortable spread among the top 4 competitors who were all separated by only .6 of a second this morning.

Sweden’s Jennie Johansson wrangled in silver in 1:08.05, while Australia’s Taylor McKeown touched in 1:08.29 for bronze. Both women already appear within the world rankings in the 6th and 18th slots, having notched times of 1:06.30 and 1:07.23 at the Swedish Open and Australian National Championships, respectively.

Australia earned its first gold medal of the meet in the form of comeback kid James Magnussen‘s victory in the 100m freestyle. Tonight followed suit with this morning in terms of time, with no competitors dipping below the 49-second territory. Nevertheless, Maggie’s winning 49.11 (23.97/25.14) is a confidence booster in his first race since the 2016 Olympic Games. Russia’s Nikita Lobinstev touched in 49.51 for silver, followed by Cameron McEvoy, the fastest 100m freestyler ever in a textile suit, who finished in 49.53.

200m backstroke Olympic silver medalist Mitch Larkin also collected gold for the Aussies, touching in 54.08 in the 100m distance today. He’s been sub-54 already this season (53.54) and will look to take on American Ryan Murphy, China’s Jiayu Xu and Japan’s Ryosuke Irie, among others, in Budapest.

Swedish sizzlers Sarah Sjostrom and Michelle Coleman collected two individual event wins in tonight’s finals for their nation. Sjostrom smacked down the women’s 100m butterfly field, cranking out a monster 56.20 for the new #1 time in the world. That outing overtakes her own previous world-leading time of 56.26 from April’s Swedish Open. Sjostrom won gold in Rio in a new world record mark of 55.48, but her 56.20 from today would have been enough for silver, for perspective. Her time also registers as a new Mare Nostrom meet record and is positioned as the 13th fastest performance of all-time.

For Coleman, the freestyle specialist continued to make her mark in the women’s 200m event, taking the win in 1:57.38.  She edged out a charging Madi Wilson from Australia, who hit the timepad just .59 later in 1:57.97. With Sjostrom opting out of the 200m freestyle individually as of late, Coleman has stepped up big time, already holding the 2nd fastest performance in the world this season in 1:55.64.

The Iron Lady was indeed victorious in her world record event of the 400m IM, notching a swift 4:34.12 in a field of just 6 women. That is the Hungarian’s fastest time of the season and Hosszu now ties Britain’s Hannah Miley as the #2 fastest time in the world. For Hosszu, she’s been incredibly consistent at this time of year in the 400m IM. In Monaco in 2015, she was 4:34.16, with her time last year clocked at 4:34.14.

The Aussies also had a medal in the form of 400m freestyle Olympic gold medalist Mack Horton finishing in the runner-up slot in the same race tonight in Monaco. The Melbourne Vicentre athlete notched a time of 3:50.13, but it was Malaysia’s Welson Sim who stood atop the podium in the golden time of 3:49.48. That effort establishes a new Malaysian national record, overtaking Sim’s own previous mark of 3:50.33 from last year’s Singapore Age Group Championships.

Hungary’s Laszlo Cseh submitted a solid time in the 200m butterfly tonight, clocking the only effort under the 2-minute threshold. 1:57.52 is what Cseh threw down, although we noted earlier how the field didn’t include British emerging 200m butterflyer James Guy. Guy was held back in Britain, along with teammates Siobhan-Marie O’Connor, Calum Jervis and Christopher Walker-Hebborn, who were all booted from an overbooked flight.

On the 50m sprinting side, we got to see primetime match-ups within round 1 of the skins competition of the freestyle, backstroke, breaststroke and fly bracket racing this morning, with the rounds to select the top 16 taking place. Tonight we saw the fields narrowed down to 8 and finally 4, who will compete for the head-to-head round tomorrow. Below are the top 4 in each of the 50m events:

Sjostrom is totally dialed into her speed now that she’s dropped the 200 free from her schedule and can pop off fast times seemingly at will. That 50 free world record is sitting on borrowed time, and the 100 won’t be far behind. It’s the Summer of Sarah.

I think that barring something inhuman being produced at US Nationals, Sjostrom has to go in as clear favourite in both the 50/100 free but making any WR record assumptions (apart from cases where someone is just so far ahead of their competition) is a dangerous business. They tend to happen … when they happen rather than as a predictable matter of course

That 50 WR is far from a gimme; yes she gave it a nudge earlier this year just as C1 did last year but its going to be a case of her getting everything exactly right ….. and everything else fall her way. She still has to drop the best part of 0.5 sec to grab that… Read more »

Granted swimmers will be at any number of differing points of their preparations but looking solely through the lens of times; apart from Sjostrom, Efimova, Hosszu (400IM) & maybe Koseki we basically saw a bucketful of “meh”.

With some of the winners (Cseh, arguably Seebohm, maybe Horton), one could make the case that they did enough to do the job without undue stress but some other “names” (McEvoy, Larkin) would most likely be wanting to be considerably faster than they were.

When I went to the “results” page following the link provided at the top of this article I noticed for the 200 free:
“Mare Nostrum Records:1:54.66 MUFFAT Camille (1989) FRA 06/06/2012 CANET”
See how different it is compare to what we have today.
I miss those names that made the W200 freestyle one of the most interesting swimming competition in recent years: Laure Manaudou, Federica Pellegrini, Camille Muffat, Alisson Schmitt, Missy Franklin, Sarah Sjostrom.
Only Katie Ledecky left to expect something exciting.

Agree – the Rio Sjöström-Ledecky duel was something to behold but since then the 200 is a bit.. well just not it. There is no race where queens of speed and endurance meet.

Rio was less than a year ago, it’s not been that long.

Most hilarious thing was the announcer (I believe he was Australian), who kept getting confused because Cseh had hair.

She had an interesting breathing pattern. No breaths for 6 strokes off the start, then every third, then every stroke. Seems like she’s doing it by feel rather than strategy. I realize she can do a no-breath 50 fly, but maybe settling into an every other would work better. Would love to see her do a 54 high some day.

Nah, am not really seeing it as anything significant as she swam 1.58.2 at NSW Titles in March. What is curious is that she actually decided to race the B final rather than give it a miss. Perhaps she IS legitimately considering a push towards making the 4×200 relay going forward but the perennial issue with C1 is going to be how long can her body hold up for.

The mildly pleasing note for AUS in that race was the maiden sub 1.58 from Madi Wilson. They sure as hell need the 1.58 crew that’s been selected to back up McKeon to start breaking through that barrier and by some margin if they’re going to be anywhere near a podium… Read more »

Or the 2min 00 that she actually swam

Apologies, zap that last comment. My eyes finally caught that typo in the article ! Mea culpa

We are proud of our lady and the success of her new club.

Instead of this “our lady” why not use more traditional nickname widely used by Russian sport commentators: ” Our gold fish” (наша золотая рыбка). I think it is more appropriate.
One will definitely have difficulties to imagine Our Lady in bath suit. It’s not safe, you know, nowadays to deviate from classic images of subjects of worship.

There are a variety of images for you to imagine on her instagram page if that is what you are after. https://www.instagram.com/pryanya93/

Very impressive… But no views with maybe only one exception (not sure) of Mother Russia. Australia, USA, Middle East … where are pictures of the land that stands behind her and awards her with highest Orders? Don’t you think it is kind ungrateful?

* “rybochka” . This autocorrect kills me. It switches from Russian to German. 🙂

We appreciate the effort.

No need .Let Yuliya post her travelguide . For pics of Mother Russia I like to follow my number 2 man Ramzan Kadyrov . He has everything from hiking up to shrines , horses, cats , babies , babushkas , knights , weight training , forests , mountains , valleys & indeed his very high kicks .

I like it, G.I.N.A very much. 🙂 Since when a man with the first name “Ramzan” would call Russia the Mother? It’s the same to imagine Dzhokhar with Tamerlan (American citizens) waving American flags at Boston Marathon.