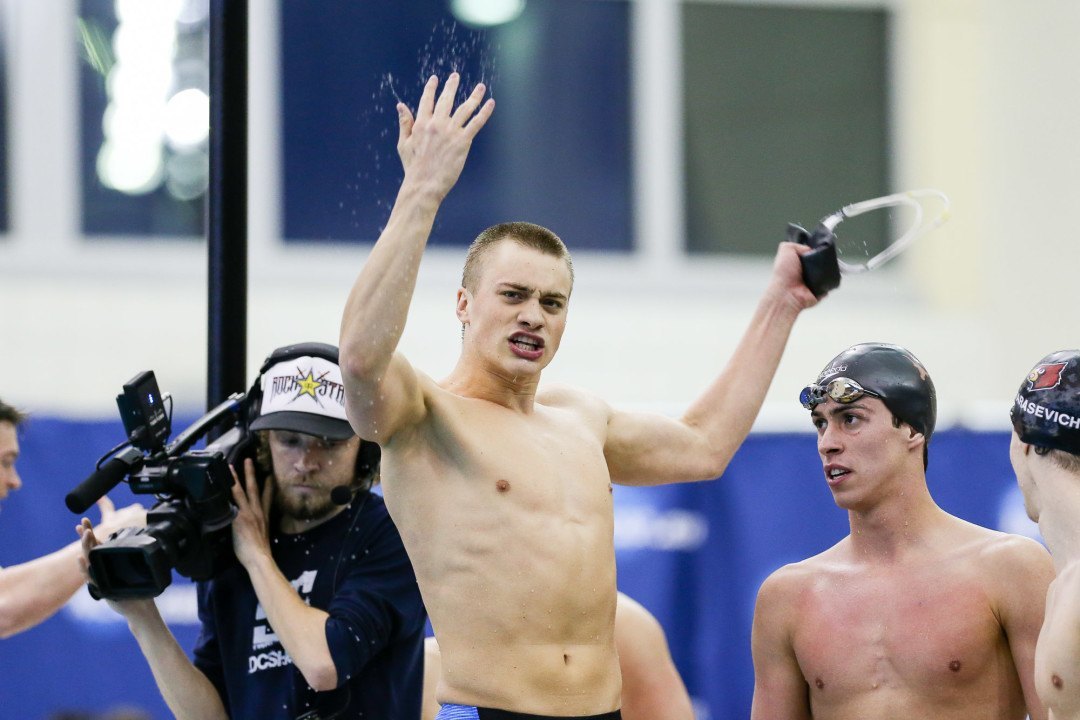 It's looking like it could be a 1-2 finish in the 400 medley relay for Texas and California for the 3rd straight year. Archive photo via Tim Binning/TheSwimPictures.com

We’ll keep this one short: California and Texas have had epic duels in this event the past two years, and there’s no reason to think anything will change this year.

The two-time defending champs should be deploying all four of the same swimmers as they did last year: John Shebat, Will Licon, Joe Schooling, and Jack Conger.  The latter three also swam on this relay two years ago, with Schooling specifically providing the decisive split each time.  Shebat, a freshman last year, performed admirably in his first NCAAs, and built some momentum over the summer with a final appearance in the 100m back at Olympic Trials.

California, meanwhile, will definitely use Ryan Murphy, now the world record holder in the 100m backstroke (LCM), to lead off, but the lineup gets a bit murkier after that point.  At Pac 12s, Murphy was joined by Andrew Seliskar (52.08), Matthew Josa (44.90), and Michael Jensen (41.56), and that same lineup all should be able to drop some time.  However, Connor Hoppe split 51.53 in prelims last year, and Justin Lynch is also available on either the fly or the free leg.  So, for the first time in at least a few years, it looks like Cal may have more flexibility and the ability to rest some swimmers than does Texas.

Behind these two teams this event is incredibly deep.  It took a 3:05.99 to make the top eight in prelims last year, and a whopping 14 teams have already been under that mark.

Indiana has the fastest time so far this season with a 3:03.28 from the Big Ten championships.  The Hoosiers seem to be on a similar path as NC State — focusing initially on sprint free, but developing some top stroke swimmers over time.  Freestyler Blake Pieroni, breaststroker Ian Finnerty, and butterflier Vini Lanza are all ranked in the top 10 in the 100 of their strokes, while backstroker Bob Glover has the 25th-fastest time this season.

Another team that won’t have to travel too far is Missouri, who has two or three legs that can hang with just about any other team in the country.  Fabian Schwingelschlogl is the defending champion in the 100 breast, Andrew Sansoucie is one of six men who have dipped up 45 in the 100 fly, and Michael Chadwick is a 41-second freestyler.  They were joined at SECs by freshman Daniel Hein, whose 46.68 at SECs won’t keep them in the hunt with Cal and Texas, but is better than the 47+ they got last year and could vault them ahead of Louisville.

In similar fashion to the 400 free relay, Arizona State and Ohio State are seeded right next to each other, 5th and 6th in this case. Both teams snuck up on everyone at their respective conference meets, with some impressive results.  ASU was led by Richard Bohus’s 44.95 leadoff leg and Cameron Craig‘s 41-low anchor, with very solid efforts from Christian Lorenz and Andrew Porter in the middle resulting in 3:03.63 that few saw coming.

The Buckeyes’ lineup at Big Tens was bookended by seniors Matt McHugh and Josh Fleagle, with Jack Barone and Noah Lense holding things down in the middle.  While we don’t want to count them out completely, in all likelihood they either peaked for their conference meets, or at least, won’t be able to improve enough to crack the top 8 against some of the other teams. But, either one of these teams are certainly capable of winning the consolation final.

The Louisville Cardinals bring back three of their four swimmers from last year’s 3rd place team: Grigory Tarasevich, Carlos Claverie, and Trevor Carroll.  The Cardinals shouldn’t miss a beat as senior Josh Quallen dives in for the graduated Pedro Coutinho — Quallen is seeded 11th in the individual 100 fly.

Pac 12 rivals Stanford and Southern California sit at 6th and 7th on the psych sheet currently.  Stanford doesn’t have any one name that really sticks out, but Ryan Dudzinkski, Matt Anderson, Andrew Liang, and Sam Perry combined for a 3:04.50 at Pac 12s.  USC, meanwhile, boasts a backhalf of Dylan Carter and Santo Condorelli, along with backstroker Ralf Tribunstov and breaststoker Carsten Vissering.  They’re only 0.01s behind Stanford, and look they like could be faster here.

Any team with Caeleb Dressel cannot be discounted, and now that the Gators have Chandler Bray to hold down the breaststroke, we could see the first sub-40 split ever Thursday night as Dressel anchors.  Adding Jack Blyzinskyj on back (Bayley Main swam at SECs) and a fully tapered Jan Switkowski on fly means that Florida should move up from their 8th place seed time of 3:04.52.

This is probably the relay that Ryan Held will sit out, but even without him, NC State looks stronger in this relay than ever.  Their ACCs lineup: Andreas Vazaios, Derek Hren, Justin Ress, and Soeren Dahl has a good mix of veterans and improving swimmers, and they’re seeded 9th with a 3:04.56.

Three SEC schools round out the squads who’ve been under 3:06 this year: Auburn, Alabama, and Georgia.  Of those three, the Bulldogs probably have the best chance of slipping into the A-final.

Dude, “Deja vu all over again” is a little redundant lol

Swimming is 90 percent mental and the other half is physical.

A little Yogi Berra reference there. 🙂

Daniel *Hein*, just FYI. I’m rooting for this Mizzou team, they could have some dang good relays if they’ve made any improvements since December.

Welp, looks like it got all fixed up in between me seeing it and posting about it 😛

Think that was a victim of autocorrect, thanks for the catch!

I could see Texas resting Schooling and Conger in favor of Glass and Haas. However, I feel as though that would be a risky move.