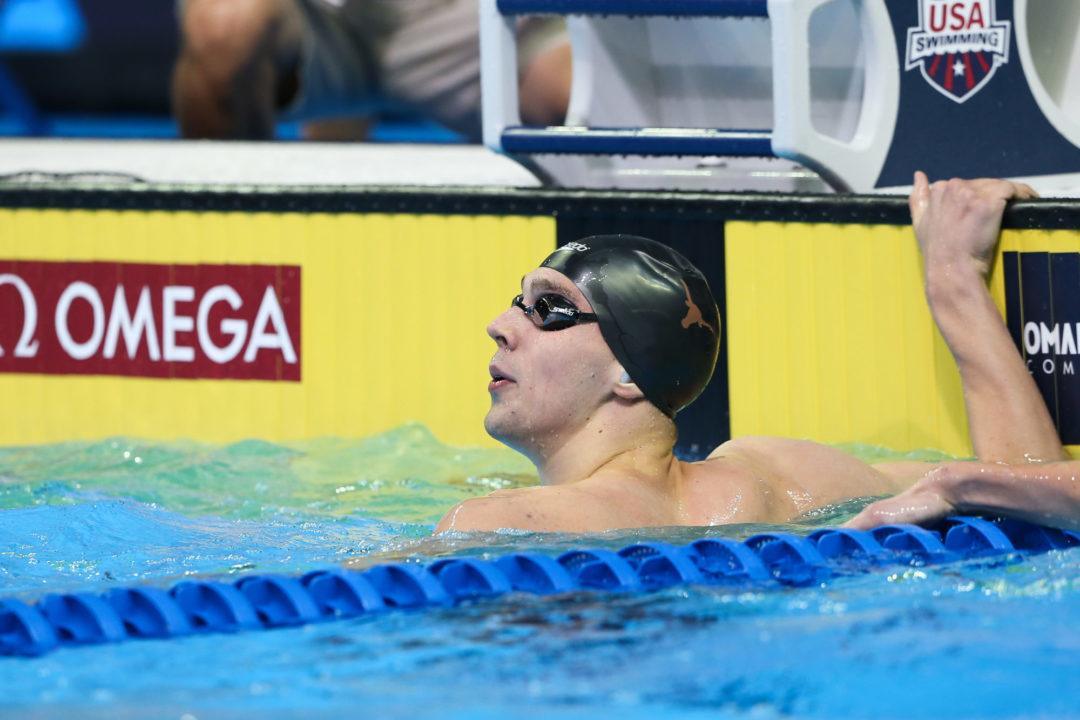 Olympic gold medalist Clark Smith followed up his fast 500 free victory last night with the top 200 free time in this morning’s prelims at the 2016 Texas Invite. Smith led the pack with a 1:34.22, giving him about a half second over Stanford’s Tom Kremer (1:34.66). Harvard freshman Dean Farris, who blasted a 1:33 anchor split on the 800 free relay, swam a personal best 1:34.79 to close out the top 3 this morning.

Townley Haas, Smith’s Olympic relay teammate, squeaked into the top 8 in this morning’s prelims. Haas, who holds the American Record in this event, picked up 8th with a 1:35.62 this morning. Narrowly missing out with a 9th place finish was Stanford’s Grant Shoults in 1:35.76.

Arizona’s Nick Thorne and Texas’ Jonathan Roberts have set up a good race in the 400 IM tonight. This morning, Thorne was the fastest swimmer with a personal best 3:43.54, while Roberts was just behind in 3:43.73. Also in the mix tonight will be Stanford’s Abrahm DeVine, the 200 IM champ, who qualified 4th in 3:46.88. His Stanford teammates Curtis Ogren (3:46.82) and Max Williamson (3:47.18) will be swimming on either side of him tonight.

Also taking on that double was Arizona All-American Annie Ochitwa, who finished 3rd in the 100 fly in 52.62 and 4th in the 100 back with a 52.23. The Wildcats lined up 2 more swimmers in the 100 back final, as they took the 3rd through 5th slots in prelims. Katrina Konopka cracked the top 3 with a 52.10, while Olympic Trials semifinalist Taylor Garcia threw down a 52.54 for 5th.

Nope let’s give him his due. He swam a 1:36 low in the early 90s and I’m sure they’d love to have a few more guys capable of that on this year’s conference team. The Ivy record is 1:33.5 set in 2009 by some guy from Princeton. His parents named him after a town in the Berskshires but didn’t know how to spell it correctly.