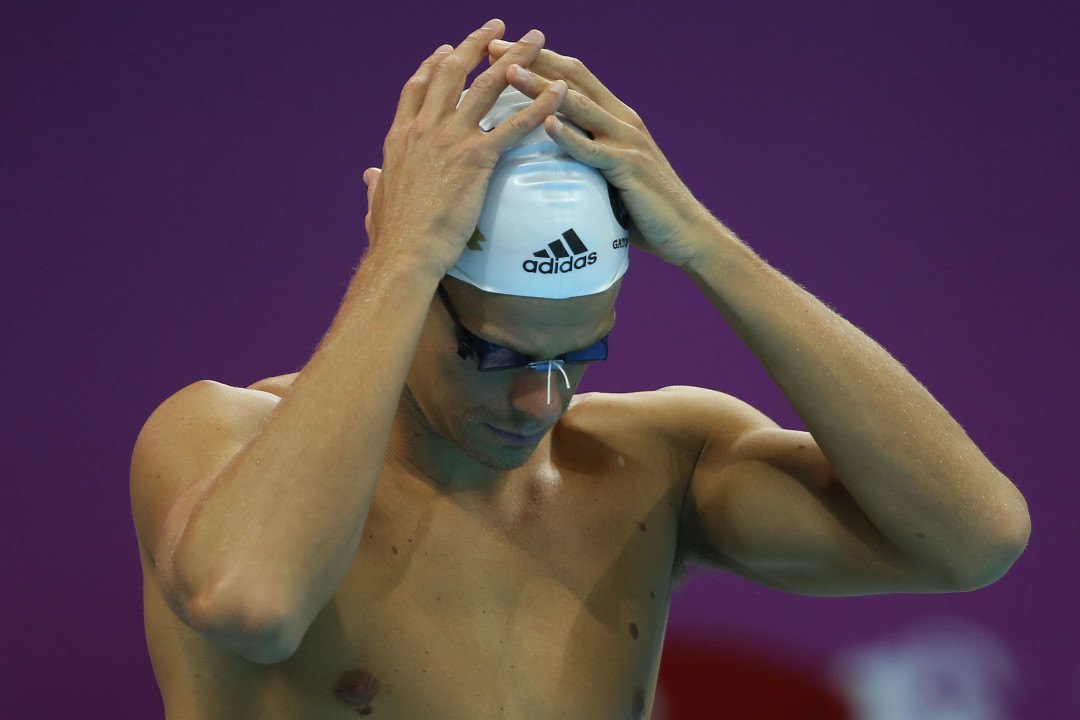 The final day of the 2016 Maria Lenk Trophy includes some exciting races including both the men's and women's 50 freestyle... Current photo via Satiro Sodré/ SSPress

Bruno Fratus took the men’s 50 freestyle in a time of 21.74 just missing his season’s best of 21.50, which he recorded at the Brazil Open in December.

Cesar Cielo recorded a 21.99 in the prelims, which put him as the second swimmer behind Fratus to qualify for the Olympic team as long as no one went faster in the final. Unfortunately for the 2008 Olympic champion someone did. Italo Durate finished second in the final hitting the wall in a time of 21.82 while Cielo collected the bronze finishing in a time of 21.91.

There were three women under the Olympic qualifying standard of 25.28. Etiene Medeiros won the event in a time of 24.64 followed by Lorrane Cristina who recorded a 24.95, Graciele Herrmann who posted a 25.09 and Larissa Oliveira who finished in a time of 25.18.

Medeiros, who tied the Olympic qualifying time at the Brazil Open, secured her spot with her performance on Wednesday evening. Her time of 24.64 was not far off her national record of 24.55 and places her just outside of the world’s top 10.

Although Cristina beat Herrmann and was under the qualifying standard Herrmann still maintains her spot on the team as Cristina was not able to beat her time of 24.92, which she put up at the Brazil Open.

Vinicius Lanza took the men’s 100 butterfly in a time of 52.75, 39 one-hundredths of a second slower than the Olympic qualifying time. Lanza did go under the qualifying time in the prelims, posting a 52.22, but to make the Olympic team we would have had to go faster than 52.17, the time that Marcos Macedo recorded at the Brazil Open.

Thiago Pereira finished second, just two one-hundredths behind Lanza, touching in a time of 52.77. Kaio de Almeida finished third in a time of 52.80. Almeida is already on the Olympic team for the 200 butterfly.

It is now confirmed that the two athletes representing Brazil in Rio will be Henrique Martins and Marcos Macedo.

Natalia de Luccas won the women’s 200 backstroke with relative ease hitting the wall over two seconds ahead of the field. Luccas took the event in a time of 2:13.91 more than three seconds over the Olympic qualifying time.

With an incredible final 100 meters Brandonn Cruz was almost able to catch Miguel Valente for the win in the men’s 1500 freestyle. More importantly than that Cruz’s final surge maybe what pushed both himself and Valente under the FINA ‘A’ Standard.

The two pushed each other hard enough that they both snuck under the FINA ‘A’ Standard of 15:14.77 qualifying them for the Brazilian Olympic team.

You say that as if it’s a bad thing… I know lot’s of folks who’d be happy to be multi-time Olympians and mutli-gold medal winners at those Olympics. Maybe I’m missing something?

Personally I was rooting for Cielo, but I couldn’t help but see a slight resemblence between the two… Cielo delaying his opportunity to qualify for these Olympics (arguably his most important yet, considering they’re on home soil) seems to bear just a little bit of hubris as the hero’s tragic downfall… It’s an especially apt comparison considering Hall, like Cielo, scratched the 100 (where each could’ve at least qualified for a relay spot) to focus on the 50 and saw their plans backfire.

Just for the man who cheated the world back in 2011, people might say he was a great champion but once a cheat always a cheat.

For now, next week we will know if and who will be a relay alternate.. who knows..

Would they take him? It seems that Brazil is set without him.

They will take 5. they can use 4 on prelims, and pick the fastest 3 for final. He would still be a solid leg, and I think ending his carrer there is more fitting than at a Trials..