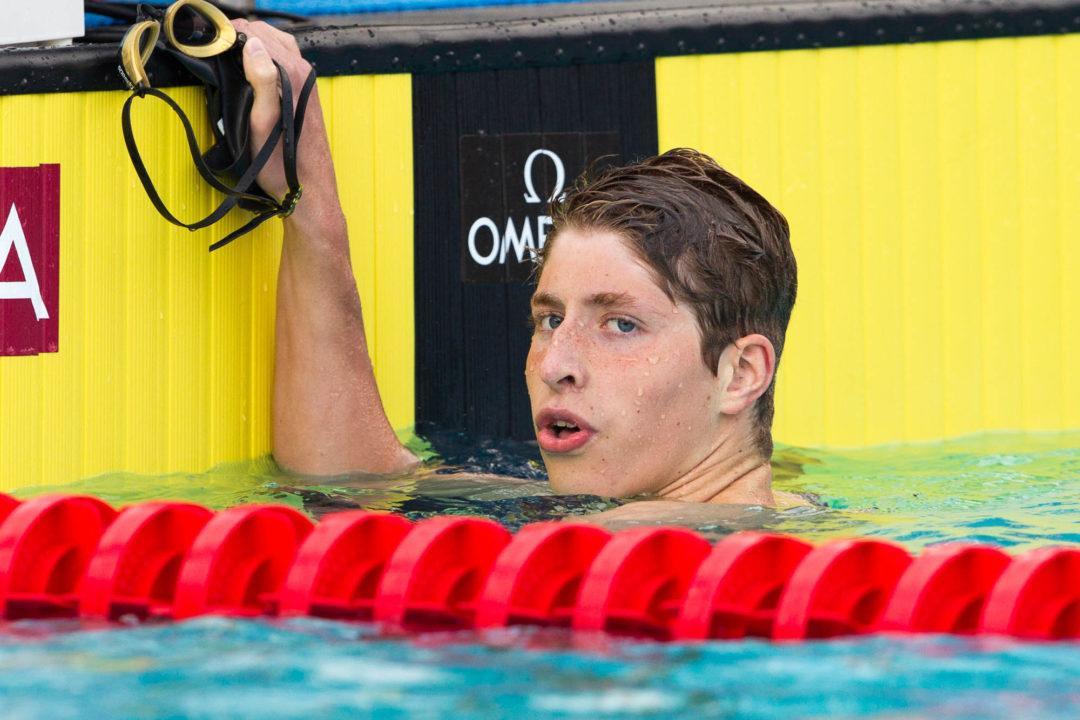 After one year with the Auburn Tigers, freshman Sam Stewart will transfer to the defending NCAA Champions from the University of... Archive photo via Tim Binning/TheSwimPictures.com

After one year with the Auburn Tigers, freshman Sam Stewart will transfer to the defending NCAA Champions from the University of Texas, sources close to the situation tell us.

Stewart’s biggest improvements in his first year of college swimming came in the IM races, where Texas scored a combined 49 points (all from underclassmen) at last year’s NCAA Championships. Including 200 IM NCAA Champion Will Licon, that was Texas’ second-highest scoring two-event ‘stroke group,’ behind only their butterfliers.

Stewart scored 37 individual points at last year’s SEC Championships, which includes a 6th-place finish in the 400 IM; for Texas, conference scoring is basically irrelevant in the anemic Big 12, so Stewart will fight for a spot on an NCAA roster that had to leave one qualifier home last year.

The Texas men finished 1st at last year’s NCAA Championships, and the Auburn men were 10th.

As a prep, Stewart swam for Crawfish Aquatics in Louisiana and the YMCA Hubfins in Mississippi.

I’m sure this won’t be the last Auburn transfer headline that we will be seeing. Feel sorry for the student -athletes. They deserve better than Brett Hawke. Sam best of luck and enjoy winning.

Is this the same Brett Hawke who in 2009 famously (and repeatedly) claimed that tech suits didn’t help at all?

Why people still trust this man to coach their kids after that truly baffles me.

“I can’t believe that!”-says no one in the swimming community.

Swim for the on fire natty champs Texas, or the sinking ship that is Auburn. Hmmm…tough one. Auburn will not be in the top 10 next year.

Yet falling rankings and students transferring isn’t enough for the AU athletic department to replace the head coach.

Best of luck to the kid.

Smart move, i’m sure others will transfer as well.