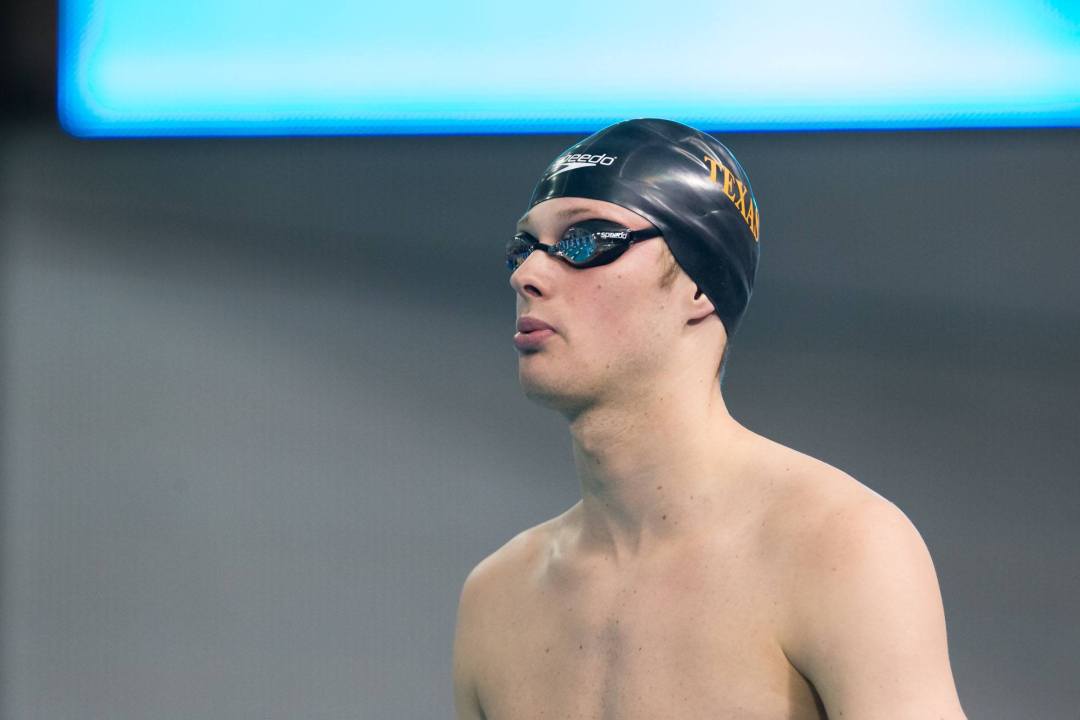 American record holder Jack Conger will look to win the NCAA title in the 200 fly after finishing in the runner-up position in 2015. Archive photo via Tim Binning/TheSwimPictures.com

At the 2015 NCAA Championships it wasn’t defending champion and NCAA record holder Dylan Bosch who won the 200 fly, nor was it the newly minted American record holder Jack Conger, but it was Texas freshman Joseph Schooling who took both men out, winning in a best time of 1:39.62. Schooling, who sits atop the NCAA this season with a time of 1:40.48 from the Texas Invite in December, went 1:41.10 in a time trial at the recent Big 12 Championships, putting him in good shape to have another sub-1:40 swim at NCAAs.

Conger, the fastest man ever in this event (1:39.31), will look to get redemption on Schooling after he was out-touched for the win last year by 0.12. Conger comes in ranked 2nd to Schooling with his time of 1:40.57 from the Big 12 Championships, and will look to get under the 1:40 barrier for the third time in his career. With Conger a favorite to make the U.S. Olympic team in this event in June, I think we’ll see him take out his friendly rival Schooling and win his first individual NCAA title (unless he wins one earlier in the meet).

2014 champion Dylan Bosch of Michigan was upended by both Schooling and Conger last year, and will look to regain his title in his senior season. Bosch, a South African native, comes in ranked 5th in the NCAA with his time of 1:40.86 from the Big Ten Championships, indicating a top-3 finish is far from a sure thing. Schooling, Conger and Bosch were the only three men under 1:42 in last years NCAA final, but this year there are seven other men who have broken that barrier already this season.

The SEC Championships this year featured a very fast 200 fly field, with 5th place at the meet (1:42.02) faster than 5th place at last years NCAAs (1:42.22). Leading the way was Auburn sophomore Hugo Morris, who won the conference title in 1:40.59, which was a best time by over a second and a half. Morris saw a fairly big add from SECs to NCAAs last season, so we won’t shoo him in as a sure thing for a top-5 finish just yet, but he has made significant improvements this year. 2nd place went to Georgia junior Pace Clark who has been 1:40.6, 1:40.7 and 1:40.8 this year, showing great consistency. Clark has been able to ride the momentum after a strong summer where he finished 3rd at U.S. Nationals, and will be a major player in the NCAA final. Also swimming fast at SECs were Gunnar Bentz (1:41.56), Jan Switkowski (1:41.98), and Arthur Mendes (1:42.02). All three swam personal bests in the SEC final, and will all be in the hunt for a berth in the A final. Switkowski was the bronze medalist at the World Championships last summer, so don’t be surprised if he jumps up and challenges the likes of Schooling and Conger.

Andrew Seliskar (Cal) and Justin Wright (Arizona) went 1-2 at the Pac-12 Championships, with Seliskar winning in 1:41.53 and Wright in 2nd in 1:41.76. Seliskar, who was the #1 ranked recruit of this years freshman class, was just shy of his personal best from 2014 of 1:41.33. He’ll certainly be one to watch out for in the final. Wright, a sophomore, swam his three fastest 200 fly’s ever at the Pac-12 Championships (including a time trial on the first day). Wright comes in seeded 9th and will have some work to do in prelims if he wants to get through to the A final.

Dark Horse: Indiana freshman Vinicius Lanza is seeded 13th with a time of 1:42.38. Lanza is seeded higher in the 100 fly, but if he can execute his morning swim perfectly he could very well be a surprise member of the championship final.

Andrew Seliskar will be a bigger threat in all his events. Calling it here. When he went his 1:41 as an 18 yo he said he messed up on the last 50 and had wanted to be 1:39 (despite crushing the NAG). NCAAs is where he’ll do it. He wouldn’t choose competing against a LOADED 200 fly field instead of 200 breast unless he had something big in the tank. We all know he wasnt fully tapered for Pac-12s, and with Seliskar, that actually means something.

I agree, I think Seliskar is going to have a breakout meet this week.

I hope Seliskar is indeed a threat at this meet – a threat to push Conger and Schooling deep down into the low 1:39’s and (I will say it here) I think a high 1:38 which I think is probable…

I keep watching this ‘smooth’ American Record by Conger in February’s trial… https://youtu.be/n7Je75ONZwY
(not rested and not pushed).

Good article…the SEC comparison to last year’s NCAA meet is an eye-opener. Agree with Penguin that Seliskar would seem to have a big effort in him; for me that’s based on his swims at the Arena Pro Austin meet.

The top-end depth of this meet just gets more and more amazing. Dressel (50), Smith (500/1650), and Murphy (both backstrokes) would seem to be locks. Everything else looks up for grabs between a fair number of guys. Hadn’t thought about it, but the 200 fly is going to be one of the best events of the meet, maybe even requiring 1:41-mid to final.

Honestly, when I made my picks I completely forgot about Bosch and the fact that he actually has the fastest time (at NCAAs, third day, in finals vs. time trial in relaxed setting at start of meet). Now that he is dropping the 400IM he may even drop time from his NCAA record. I do not want to edit my picks though, because from what I have heard via comments on here, it would be more trouble than it’s worth.