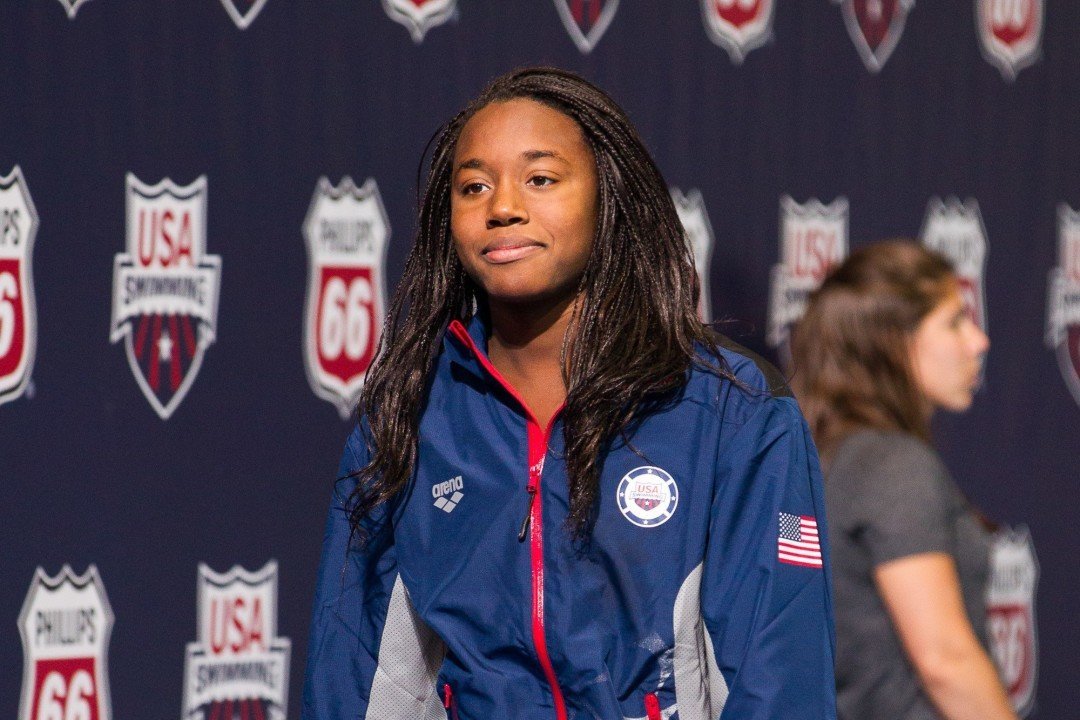 The young star Manuel (above) has catapulted herself on the international scene-- can she back that up with NCAA greatness? Archive photo via Tim Binning/TheSwimPictures.com

Last year, Georgia Olivia Smoliga absolutely exploded at SECs to take the 50 free title in a best time of 21.54, blowing her 22.02 prelims time to smithereens. She left no doubt in anybody’s mind that she could repeat that feat, posting a 21.81 at NCAA prelims only to blast a 21.59 and blow right past veteran sprinters Margo Geer and Kasey Carlson. This year, though, Smoliga has only been 21.96, and there’s a new kid on the block.

That new kid, Simone Manuel, comes in with the fastest seed time (21.59). Manuel worked her way onto the US roster for the 2013 World Championships in Barcelona, and has developed into America’s next sprint star in long course. This will be Manuel’s first NCAA championship, and backed by a scary fast, sprint-based program, keep close tabs on Lara Jackson’s national mark.

Let’s keep in mind that this race is 50 yards. Just over 20 seconds. A slip, missed turn, early or late breakout, and a number of other small mistakes can cost tenths or even hundredths of a second, but that can cost the race. That being said, there are a host of elite sprinters who will definitely capitalize if Manuel isn’t on. The two that immediately come to mind are Wisconsin senior Ivy Martin and Cal sophomore Farida Osman, both seeded 2nd with times of 21.65. Martin has been an NCAA force for years, but many college swimmers have had trouble translating that to long course speed on the national/international stage. Martin, however, catapulted herself onto the Pan Pacs team last summer after being an international unknown, and was able to place 7th overall in the 50 free with a time of 25.18. Most impressive, though, was her US Nationals performance, where she blasted a 24.62 after having never broken 25.00 before. Osman was unable to break 22 at last year’s NCAA champs, but has looked very dangerous in the sprint free and fly all season.The Egyptian swimmer was the only female swimmer from her country to compete at the London Olympics where she finished with a 26.34 in the 50 free, but dropped a 24.92 just this past January. They’ve both been HOT this season (21.19 medley relay anchor for Osman, and did you happen to see Martin drop a sub-21 split at Big Tens??), but Martin’s a senior with more NCAA experience, so we’ll give her the edge, if only slightly.

Along with Smoliga, Georgia has quite the sprint core. Junior Chantal van Landeghem comes in with the 4th seed (21.74) and senior Maddie Locus is right behind her (21.77). Van Landeghem wasn’t too hot in the 50 last year, only B finaling at SECs and then missing a 2nd swim in the individual 50 at NCAAs, but she wowed a deep SEC field this year to win it with the time she’s seeded at. Locus was 2nd at SECs, as she was last year with a slightly faster time (21.67) behind Smoliga. Locus has NCAA success in this event, though, with a 5th place finish last year, so we’ll give her the nod over van Landeghem.

The SEC is so deep that they could take the majority of the top 8 spots. Other sprinters from the south to watch out for are Florida’s Natalie Hinds, Tennesee’s Faith Johnson, and Texas A&M freshman sensation Beryl Gastaldello. Johnson and Hinds were 3rd and 4th at last year’s SECs, and Hinds exploded in the B final at NCAAs with a 21.66 which would have gotten her 2nd in the A final. This year, Gastaldello (among other incredibly impressive swims) touched 3rd behind the two Bulldogs, bringing her in at 21.85.

There are two other top eight seeds going into the meet that certainly cannot be counted out, either. That would be 6th seed Anika Apostalon and 8th seed Riki Bonnema. Apostalon broke out on the scene as a freshman last year, posting a 7th place finish last year (22.00) to just edge out Johnson of Tennesee. Bonnema was only 49th in 2013, but moved up to 23rd last year, and won ACCs outright this year. The two are seeded with 21.8s, with Apostalon five hundredths ahead.

Dark Horse: Zhesi Li (Ohio State). The Chinese swimmer was the anchor leg for their 400 medley relay when they broke the World Record in 2009 when she was only fourteen years of age– she split a 52.81. However, she was caught doping in 2013 and was left off of the 2012 Chinese Olympic team. She’s back, though, seeded at #16 with a 22.03, and she’s no stranger to big races.

However, once a suspension has been served, the athlete is free to compete again at NCAA events.

Ohio State did not recruit her. She is not on a dime of athletic scholarship. She served a two year ban from FINA. The ban is the same whether it was an act of omission or commission.

For what it is worth, she is a delightful young lady who is well received by her coaches and teammates.

And there is a fact everyone is missing here:No one(at fourteen years-old) knows what,when and how much to take in a matter of supplementation.I hope the responsible ones got BANNED.

From what I read, her coach was also banned. I agree that at 14 you likely aren’t knowingly taking banned substances. They are being given to you.

There is also no doubt in my mind that Ohio State knowingly recruited a doper to their team considering the fact that she was a former world champion. It’s almost like Bill Dorenkott and company tried to pull a fast one on the NCAA and swimming fans. Where is the integrity in a program if you recruit someone who was doping at 14-15 years of age? If she was American, she would probably at least be blackballed by all of the big name programs. Unless she is a walk on and is not taking potential scholarship dollars from other athletes, I have a huge problem with her competing in the NCAA. Rant over.

Does Zhesi Li’s international doping ban have any impact on her NCAA eligibility? Since the ban ended and she is competing in the NCAA, I assume it doesn’t but I was curious if the NCAA has any special review process because she had previously been banned internationally.