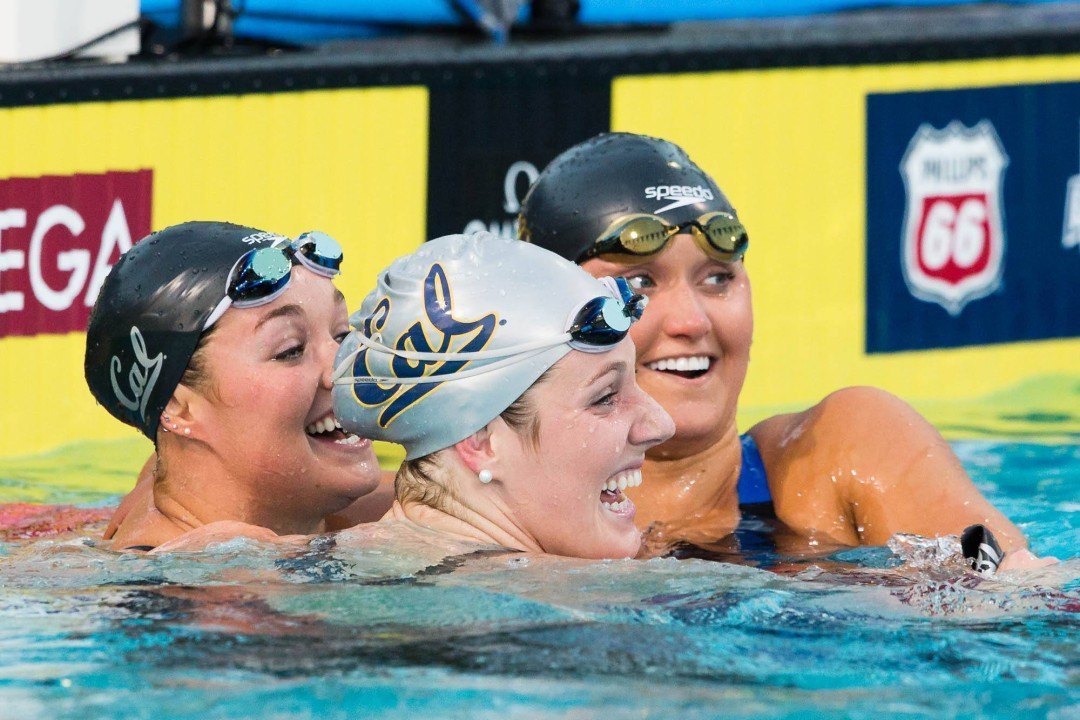 The Cardinal brought the speed last year, feeding off of a 21.20 split from now-graduated Felicia Lee to come this close to the 2009 record set by 50 free American Record-Holder Lara Jackson & company. This year, though, they only return Lia Neal and Katie Olsen from that relay. Luckily, though, Stanford has options.

While it’ll hurt to not have Maddy Schaefer on this relay, Simone Manuel shouldn’t have trouble blasting them to a lead if she starts things off. As for their fourth leg, freshmen Janet Hu and Lindsey Engel are possible replacements for Lee. Actually, at the Pac 12 Championships this year, the two joined Manuel and Neal in the relay which placed 2nd behind Cal. Manuel was only 22.27 leading off, and considering she could drop a 21 low flat start this March, Stanford is still looking like one of the best sprinting groups in the country.

Capitalizing on Manuel’s off swim at Pac 12s was California, who won the event in 1:27.18, almost a full second ahead of Stanford. Holding down the fort for the Golden Bears were Missy Franklin and Farida Osman. The stud sophomores split twin 21.46’s en route to notching the nation’s fastest time in the country. Along with Kaylin Bing and Rachel Bootsma, Cal may be the team to beat in this event.

If any team is going to make things interesting with the Bay Area rivals, it’s team title hopefuls Georgia. They tied with Stanford in prelims last year but couldn’t pull off the victory in finals, but this year they are one of only four teams under 1:28. At SECs, they won the conference title in 1:27.55, thanks in part to a 21.35 split from Chantal van Landeghem. Senior Maddie Locus led off in a 21.99, but the defending NCAA champion Olivia Smoliga along with Lauren Harrington couldn’t get under 22 with flying starts. This is slightly troublesome, more so for Smoliga, who was a 21.5 flat start at SECs last year. Nevertheless, this is a team that could and probably should have each leg under 22 seconds, and they’ll make things interesting with the teams up top.

The fourth team under 1:28 is Wisconsin out of the Big Ten. It’s no surprise that the Badgers have come in this fast when they have a swimmer like Ivy Martin swimming on a relay. At the Big Ten Championships, the senior crushed a 20.96 split, going 2nd out of the four swimmers. Aja Van Hout and Annie Tamblyn split 22 lows with relay starts, and sophomore Chase Kinney led off in 22.49. If the Badgers want to challenge the top three, though, they’re going to need at least one of those 22s to drop a 21.

Rounding out the top eight seeds are Auburn, NC State, Penn State, and Virginia. The Auburn Tigers were led by a 21.64 from emerging sprinter Allyx Purcell and a 21.76 anchor from Valerie Hull. They placed 2nd behind Georgia at the SEC Championships. NC State has a ton of sprint talent, highlighted by recent ACC Champion and ACC record-breaker Riki Bonnema. She was a 21.87 in prelims of the 50 free to take down the record, then held her seed in finals as well as blasted a 21.47 anchor leg on the Wolfpack relay.

Penn State’s fastest split from their 2nd place Big Ten performance was Carolyn Fittin (21.66), while Virginia has Ellen Thomas as their sprint weapon, who has been as fast as 21.68 this season with a flying start.  Neither team (along with NC State) has had anyone sub 22 yet this season, but these three teams will be gunning for this A final.

Dark horses: Texas A&M. This is a team that was fourth last year, but is only seeded 12th with a 1:29.01 from the SEC Championships. That relay included 21.55 and 21.96 splits from Beryl Gastaldello and Sammie Bosma, respectively. However, that relay also included some less impressive splits of 23.08 and 22.42 from Bethany Galat and Claire Brandt, respectively. If Lili Ibañez can come close to her 21.77 split from last year, the Aggies have a very good shot at cracking the A final again, but Ibanez has had a tough 2014-2015 season overall.