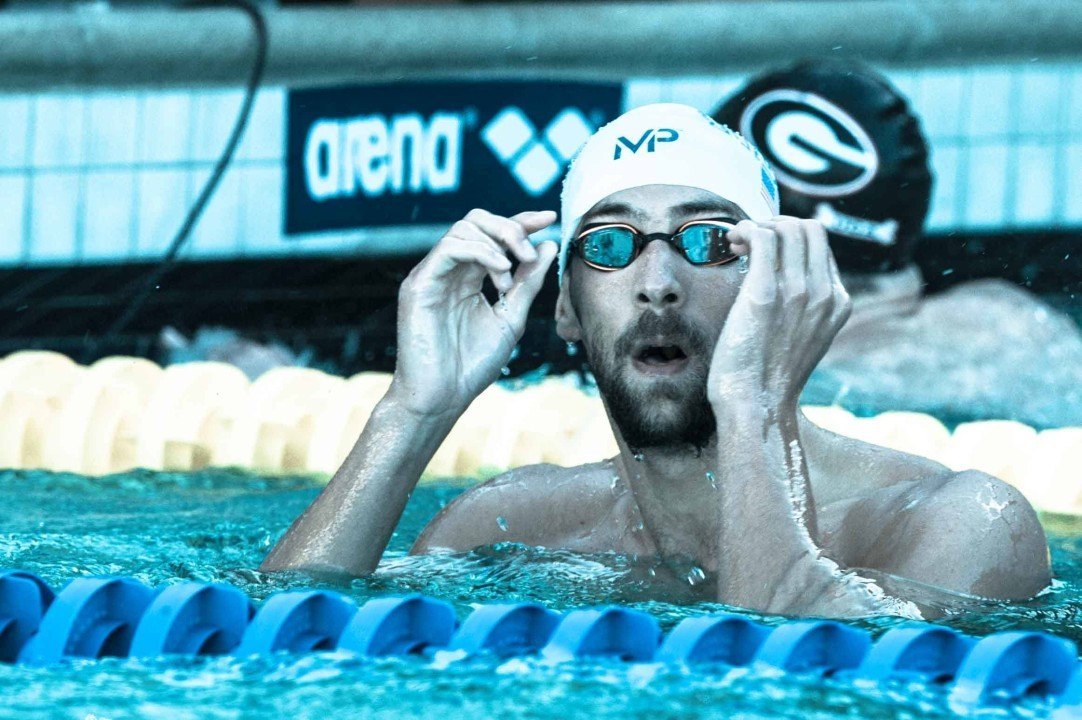 Michael Phelps will have his first swim of the U.S. National Championship on day 2 in the 200m fly prelims Current photo via Mike Lewis/Ola Vista Photography

The women’s 100 back will kick off day 2 in San Antonio. The top two seeds in the event are both international swimmers. Georgia Davies is seeded 1st at 59.58. She is here to post some fast times after failing to qualify for the British world championship team. Davies was the bronze medalist in this event at the 2014 European championships. Belinda Hocking of Australia is seeded 2nd in 59.78. Hocking, the two-time world championship medalist in the 200 backstroke recently took a break from swimming and didn’t attempt to qualify for the world championships this year, but she is back and looks to be starting her push for Rio 2016. The top American seeds are Hannah Stevens (1:00.04), Olivia Smoliga (1:00.06) and Clara Smiddy (1:00.49). Smoliga and Smiddy won silver and bronze at the Pan Am games in Toronto just last month. Other top seeds include Scotland’s Kathleen Dawson, Amy Bilquist and Spain’s Mercedes Peris Minguet. Heat 8 of 14 will feature 100m fly champ Kelsi Worrell who is seeded with a time of 1:02.76. Heat 12 features Stevens and Dawson, along with Megan Romano who won two relay gold medals at the 2013 World Championships. In heat 13 we will see Peris Minguet, Hocking and Smiddy. The penultimate heat features Bilquist, Davies and Smoliga.

Coming off an 3rd place finish in the 400 free tonight, Townley Haas is the top seed in the men’s 200 free at 1:48.29. He is followed by Frank Dyer, Michael Wynalda, Michael Nunan, John Lewis and Blake Pieroni. Heat 3 of 12 will feature Nicholas Sweetser who finished 5th in the 400 freestyle and Sean Grieshop who was 2nd in the 400 IM. The 8th heat will have 400 free B-final winner Ryan Feeley and in heat 9 we will see Zane Grothe after his spectacular victory in the 400 freestyle, along with NCAA standout David Nolan of Stanford. In heat 10 we will see Wynalda and Pieroni along with Travis Mahoney of Australia, and in heat 11 Frank Dyer and John Lewis will be joined by notable names Jack Conger, Bobby Hurley and Caeleb Dressel. The final heat will feature Haas and Nunan, along with Kyle Whitaker and Max Litchfield, who’s time in the B-final of the 400 IM would have been good enough for 2nd had he made the A final. Jack Conger’s first swim of the meet should be a good indicator of what kind of form he is in. Andrew Seliskar had a rough 400 IM final and has scratched this event, as has California backstroker Jacob Pebley. Surprisingly, 400 free silver medalist Clark Smith has chosen to swim the 200 fly rather than the 200 free. He is obviously has a great 200 fly, but it would have been interesting to see what he could do in the 200 free, because in the 400 free he had the fastest 200m split of anyone (1:50.61).

A pair of Olympic medalists and a world champion lead the men’s 100 backstroke. 2012 Olympic silver medalist in this event Nick Thoman is the top seed with a time of 53.20. He is followed by double bronze medalist from the 2008 Olympics Arkady Vyatchanin and 2009 world champion in this event Junya Koga. All three swimmers will be looking to crack their respective countries Olympic teams next year. Thoman for the US, Koga for Japan and Vyatchanin for Serbia after switching his sporting citizenship from Russia recently. They will be followed by Jacob Pebley, Eugene Godsoe and Scotland’s Craig McNally. In heat 10 we will see Carter Griffin in lane 4, who is coming off a silver medal performance at the Pan Am games in the 200 back. Heat 11 will feature Koga and McNally, along with Connor Green, Guy Barnea and Michael Andrew in lane 8. Heat 12 features Vyatchanin and Godsoe along with Kyle Darmody and Austin Surhoff, and the last heat will feature Thoman and Pebley along with James Wells.

After her somewhat disappointing performance in the 400 freestyle, Allison Schmitt holds down the top seed in the 200 free at 1:56.23. She is the defending Olympic champion in this event, and will look to defend her title next year after a rough couple seasons. She is followed by Katie Drabot, Megan Romano, Sarah Henry and Madisyn Cox. Drabot is just 17, as is 8th seed Hannah Cox. Heat 6 of 13 will feature 100m specialist Amanda Weir, heat 9 will have Caitilin Leverenz who is coming off her victory in the 200 IM, and heat 10 will feature Gillian Ryan, Kate Ziegler and 15 year-old Melissa Pish. In heat 11 we will see Romano in her second event of the session along with Karlee Bispo, heat 12 will feature Drabot, Madisyn Cox and 400 free champ Lindsay Vrooman, and the final heat will see Schmitt alongside Henry, Hannah Cox and Hali Flickinger.

Andrew Seliskar holds the top seed in the men’s 200 fly with a time of 1:55.92. Seliskar is a definite threat in this event next year at the Olympic trials. Seliskar looked off form in the 400 IM final, but will look for a rebound swim here. He is followed by Ben Colley, Cameron Brodie (Scotland) and Kyle Whitaker who are all seeded with times of 1:56. Clark Smith is seeded 7th in 1:57.15, followed by the greatest swimmer in history Michael Phelps with the 8th seed in 1:57.62. We will see what kind of form Phelps is in here in his first race of this meet. Following Phelps is 2013 US National champ Thomas Luchsinger and American record holder in yards Jack Conger in his second swim of the session. Heat 9 of 11 will feature Brodie, Luchsinger and Bobby Bollier. Heat 10 features Phelps in lane 3, with Colley and Conger, as well as Gunnar Bentz who is coming off a victory in the 400 IM. The final heat will see Smith, Seliskar and Whitaker. Michael Andrew was entered in this event but has scratched it.