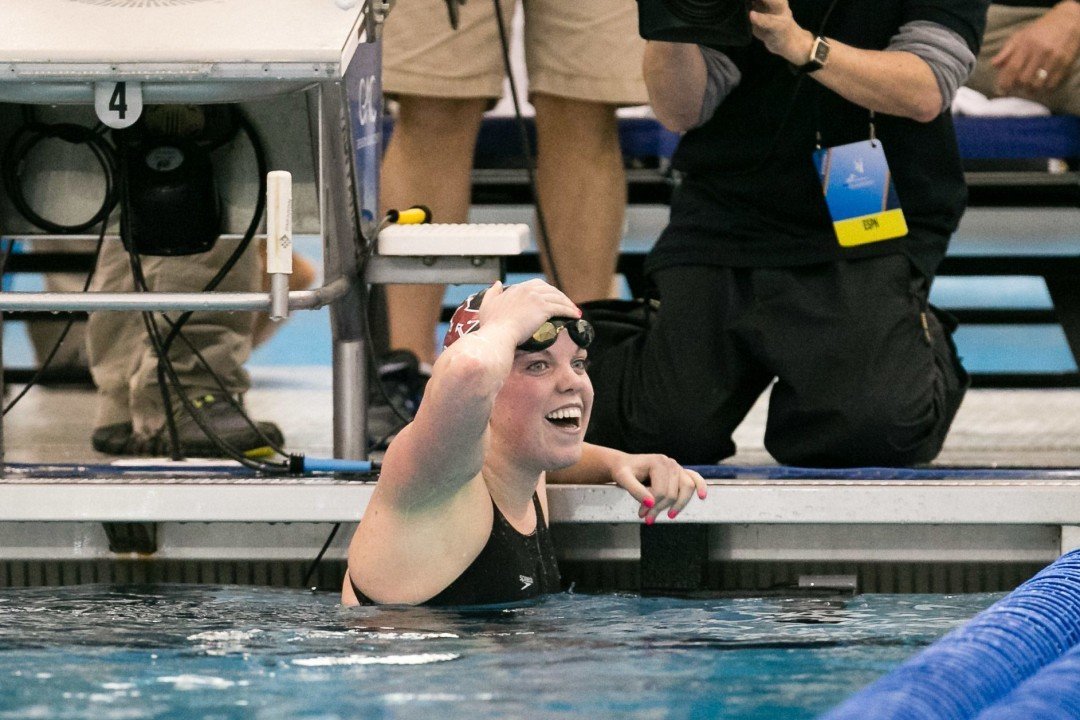 Canada's Kierra Smith (above) was the 2015 NCAA Champ in the 200 breast. She's the top seed in the event at Pan Ams, and will swim in heat 2, lane 4 tomorrow morning. Archive photo via Tim Binning/TheSwimPictures.com

Tonight’s finals session, the first one for this year’s Pan American Games, was electrifying. Canada rocked the medal standings, winning 3 Golds, 2 silvers, and 1 bronze (they medaled in all six events tonight), while multiple national records went down.

In addition, in four of tonight’s six events, athletes took down Pan Am Games records. Setting new meet records tonight were Chantal van Landeghem (100 free, 53.83), Leonardo De Deus (200 fly, 1:55.01), Canada (women’s 4×100 free relay, 3:36.80), and Brazil (men’s 4×100 free relay, 3:13.66). American Natalie Coughlin set the 100 free record in prelims at 53.85 before Canada’s van Landeghem came back to break that record in finals, while Peru’s Mauricio Fiol, 200 fly silver medalist, was under the old 200 fly Games record, as well. To top that off, both relay silver medalists, the Canadian men and the American women, were also under the old Games records in their respective events.

Case and point: these games are FAST. And it looks like multiple records are in jeopardy in tomorrow’s prelims (the fact that they are likely going to be threatened in prelims is a testament to the speed being shown at this meet).

In terms of individual events, tomorrow, there will be the heats of the 200 free, 200 breast, and 200 back for men and women. So, of six individual events slated for tomorrow’s prelims, the top seed in every event save for the men’s 200 back comes into the meet seeded under the current Games record.

To add to that, the top 3 seeds in both the men’s and women’s 200 breast are entered with times faster than current Games records.

One record, in particular, has stood since 1979. That’s the women’s 200 free Games record of 1:58.43, set 36 years ago by legendary American freestyler Sippy Woodhead. Another American, Allison Schmitt, who holds the Olympic record in the event at 1:53.61, is seeded well ahead of Woodhead’s mark with a 1:56.41. While she isn’t expected to come close to her 1:53, Schmitt has put up three 1:57’s since mid April this year.

Other than Schmitt, it’s all Canada and Brazil for top prelim seeds tomorrow morning. For the Canadians, Kierra Smith leads the women’s 200 breast (2:23.32) while teammate and #2 seed Martha McCabe (2:24.53) will swim in lane four of the first of the two heats. The Canadian women have yet to lose a race, and they also happen to be the top seeds in the 200 back with Hilary Caldwell (2:08.55) and Dominique Bouchard (2:08.99).

The sole relay event tomorrow morning will be prelims of the men’s 800 free relay, with the American team seeded first.