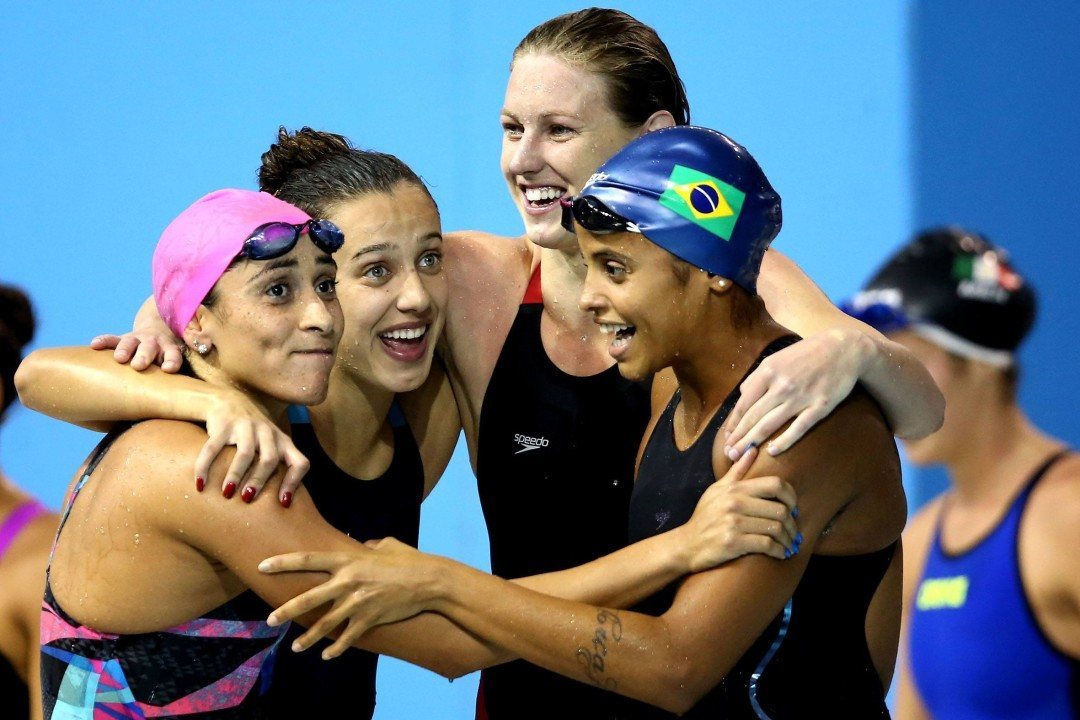 Even one meet shy of the World Championships, the Brazilian women’s 400 free relay demolished the South American Record in the 400 meter freestyle relay on Tuesday to begin the 2015 Pan Am Games in Toronto, Canada.

The team of Larissa Martins Oliveira, Graciele Herrmann, Etiene Medeiros, and Daynara de Paula combined to swim a 3:37.39 and earn a bronze medal in the final, a full nine seconds clear of fourth-place Venezuela. While that’s a demotion from the silver they earned at the last edition of this meet in 2011, their final time would’ve won those 2011 Pan American Games by three seconds, confirming the notion that all have sensed through one day about 2015 being a very fast edition of this meet.

The record-setting time beat the old mark of 3:41.05 that was done at the 2013 World Championships. That relay included three of the same four swimmers, with the exception being Etiene Medeiros replacing Alessandra Marchiorio – significant because Marchiorio had the fastest split on the old record-setting quartet.

Whereas the old record was done with all 55-lows, the new record was done with mostly 54’s, and one 53-high. That sort of full-scale shift of the splits goes beyond just one star swimmer coming through and carrying the team. Rather, this is one more data point supporting a fundamental shift in Brazilian women’s swimming in the last two years leading up to the home 2016 Olympic Games that has been as much about cultural challenges as physical ones.

.Be prepared for a big drop in 4x200free relay as well.