2016 Men’s Big 12 Championships Fan Guide: The Race Is For Second 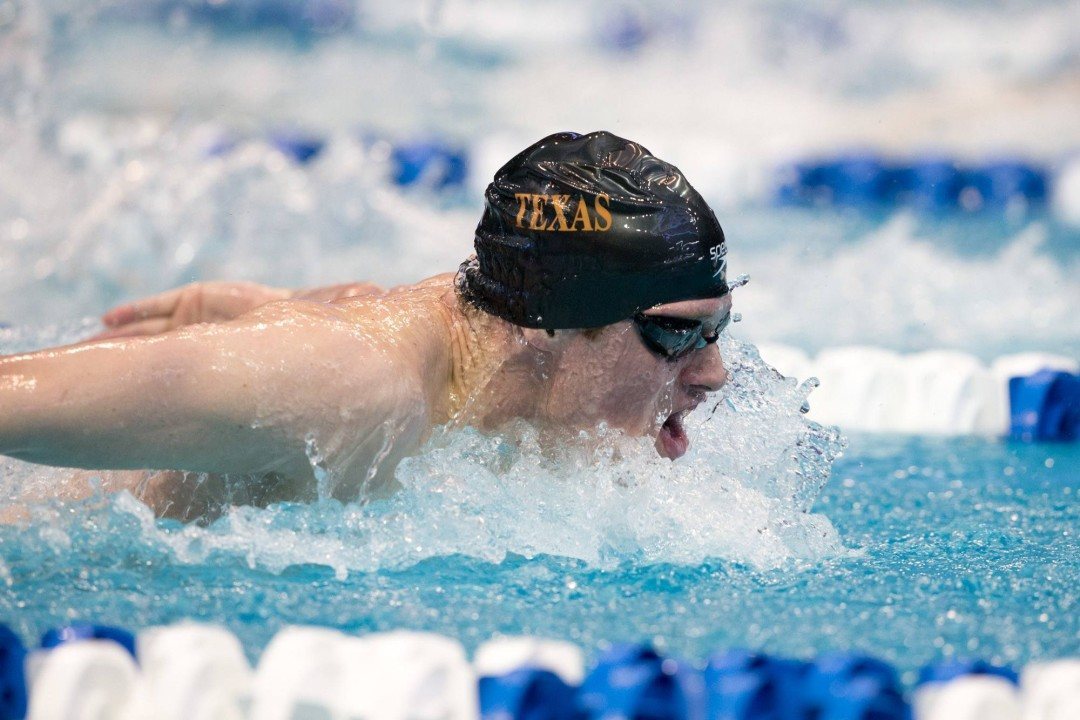 Jack Conger and his Texas teammates will have no problem winning the Big 12 conference title once again. Archive photo via Tim Binning/TheSwimPictures.com

The men’s 500 free saw another Texas freshmen 1-2. Townley Haas dropped 7 seconds from his prelims time to win the event in 4:12.63. That was a new lifetime best for Haas.

At the second day prelim of the Big 12, a strong freshman class is bringing exciting contributions to an already powerful roster for the Texas Longhorn men and women.

While most of the major conferences have experienced growth in terms of number teams, the Big 12 has been stagnant in swimming. While TCU and West Virginia have recently brought men’s programs into the country, they came as more powerful programs from Texas A&M and Missouri left for the SEC.

Despite just three teams, the Big 12 Championships will still be a very exciting one to watch and gain lots of interest. Why? The Texas Longhorns.

The Longhorns ascended from NCAA runner-ups in 2014 to champions in 2015, and look like a good bet to hold their position at the top in March. Texas has been on fire again this year, going undefeated and seeing some incredible rookie campaigns from their freshman. We saw the Longhorn freshman secure victory in both the freestyle and medley relays at their annual class relay event which is a sign this program will be at the top for the foreseeable future.

We know that Texas is going to be lights out at NCAAs, and with the conference title all but decided before the meet starts it’s clear the Longhorns won’t be fully tapered. Tapered fully, a little, or not at all, we can certainly expect some fast times coming out of this meet. It shapes up to be a very important meet in terms of its importance heading into NCAAs. Swimmers will be looking to earn relay spots and what not which makes the competition all the more fierce.

The men who starred for the Longhorns last year remain the headliners this season. Joseph Schooling, Jack Conger and Clark Smith all had terrific summers and have looked good this NCAA season. All three will be fast here, but maybe the most intriguing story on the Texas side is how their freshman fair in their first conference championship. The Longhorn rookies such as Townley Haas, John Shebat and Ryan Harty have been a revelation this season with consistent swims throughout the dual meet season, showing incredible range in a number of different events.

Another intriguing story for Texas is that of Will Licon, who had a monster breakout year last year winning both the 200 breaststroke and 400 IM at NCAAs (defeating the existing American record holders in the process), and finishing 2nd in the 200 IM. Will he be able to regain his unreal form from last year? Will the upcoming Olympic Trials impact how swimmers in contention for an Olympic berth such as Conger, Smith and Licon swim?

The real story for Texas at Big 12’s, though, is the fact that the current math projects that they’ll have more NCAA qualifiers than they’re able to take. So, while the Smiths Schoolings, Congers, and Licons of the world can just skate through and try some things at Big 12s, there will be a big battle for the 15th-18th spots on the Longhorn roster.

Looking beyond Texas, both TCU and West Virginia both face difficult years after graduating many of their top swimmers from last season. TCU graduated five top swimmers, leaving just breaststroker John Story and butterflyer Garrett Hills as the only two swimmers on the roster who have achieved NCAA B cuts so far this year. As for West Virginia, they graduated three top swimmers, and have Andrew Marsh, Max Spencer and Nate Carr all with multiple B cuts.

Texas is dominant in every event this season in the Big 12 rankings, and TCU and West Virginia will both be in tough to claim a single event. The relays between these two teams will be very important, as they were separated by just 61 points last year, and whoever gets the better of the relays certainly has a big advantage in the points rise.

TCU: John Story (senior breaststroker), Garrett Hills (junior freestyler/butterflyer)- The only two swimmers with NCAA B cuts, TCU will be in tough after such a large graduating class last year. However, they have a quite a few underclassmen who could see some big drops.

100 Fly: In what has become Texas’ signature event, the 100 fly will always be among the most highly anticipated anytime Texas is racing. After sweeping the butterfly events at NCAAs, Joseph Schooling snagged a bronze medal at the World Championships in the 100 fly, while NCAA runner-up (in both fly events) Jack Conger threw down some very impressive swims of his own at US Nationals. These two sits 1-2 in the conference once again this year by a wide margin, but don’t be surprised if one of their teammates challenges for the win. After putting 6 men into the NCAA A final last year, Texas remains incredibly deep in this event. Will Glass, John Murray, Matt Ellis and Brett Ringgold are among the names to watch for. The 200 will also be a race to watch for, as anytime Schooling and Conger go head-to-head it is compelling.

500 Free: This showdown can be brought down to the 200 and stretched to the 1650 (if they both swim it), as defending 500 NCAA champ Clark Smith and freshman stud Townley Haas have been going head-to-head all season in the freestyle events, and they will clash at Big 12s in the 500 free, arguably the best event for both men. Smith has had an unbelievable season, including a American record in the 1000 free late in 2015 and a near American record performance in the 500. Haas has had an incredible freshman year, posting incredible results ranging from the 50 to the 1650. Based on this year he may be outgunned by Clark in the 500, but you never know especially if they don’t fully taper. They are separated by just two one hundredths of a second in the 200 this season, which shapes up to be a fantastic race. Based off of Smith’s 1000 performance, you’d figure his 1650 would be pretty good as well, but he hasn’t swum it this year and I’d be surprised to see him in it here, but you never know. Haas is ranked 2nd in the NCAA in the 1650, with a 14:41.09 from December.

100 Back: It looks like we’ll see a battle of two freshman in the 100 back, with John Shebat and Ryan Harty separated by just one tenth of a second this season. Harty has been much more talked about this season, he is ranked number 1 in the conference in both the 200 back and 200 IM, but Shebat has the edge so far this season in this event. Potentially throw in Jack Conger to the mix who’s currently ranked 3rd, and West Virginia’s Andrew Marsh who is 4th, and we have a very close top-4 that will be very exciting. Unlikely, but if Harty ditched this event for the 400 IM, we would have to look there for a showdown between him, Will Licon, Jonathan Roberts and John Martens.

Texas is the obvious runaway winner here, as they have never lost a Big 12 title and are the defending NCAA champions. Texas will be less concerned about winning the meet, and more concerned about setting themselves up for NCAAs, because as defending champions they will have a huge target on their back come March.

Texas Christian University narrowly took out West Virginia in 2014, and widened their margin from 17 to 61 points in 2015. With the losses TCU has endured this year, it figures to be a very close battle again. I think West Virginia closes the gap this year and takes out TCU by a slim margin.

Relays and the performance of some unheralded depth swimmers will likely be the difference between who finishes 2nd and who falls to 3rd behind West Virginia and TCU.

kdawg – none that we know of.

Feel free to recycle this headline for your NCAAs preview.

The Race is For Second there, as well.

I thought the plan was for Clark Smith to swim the 1650 at Big 12s after going for the 1000 record in December, so that he could get a time for NCAAs

Thanks for the preview. Should be fun watching not only the stars, but also the swimmers just trying to make the roster for nationals. Amazing so many great swimmers all on one squad. I guess,we’ll know after nationals whether Joel Lin was right about this being, “the greatest team ever” Of course, USC said the same thing in football, and Vince Young squashed that! Maybe Ryan Murphy is Vince Young, and all his teammates will follow him to the improbable upset. Hook -em!