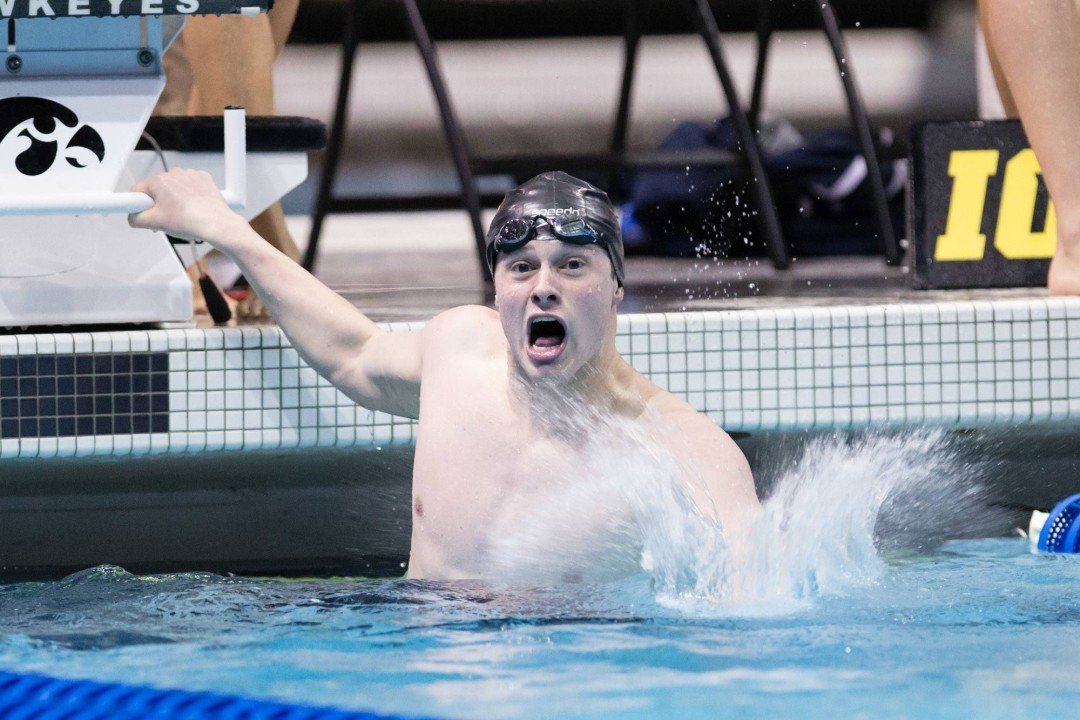 At this morning’s time trials, Joseph Schooling and John Shebat already nabbed NCAA ‘A’ cuts, with Schooling clocking 1:41.04 in the 200 fly and the freshman Shebat clocking a lifetime best 45.89 in the 100 back to rank 8th in the county.

Tonight, we’ll get a preview of what’s to come this weekend with the relays, as each team puts up their top sprinter in each stroke in the medleys and their top mid-distance swimmers in the 800 free relays.

There is also no lack of big names at this meet, and we should see some quick performances tonight from Eddie Reese’s squad of NCAA contenders, including college swimming veterans Madisyn Cox, Jack Conger, Clark Smith, and Will Licon and freshmen Townley Haas, Ryan Harty, Quinn Carrozza, and Nora McCullagh, among others.

The Texas team clocked an NCAA ‘A’ cut in the women’s 200 medley, just missing the Big 12 record by .30 seconds. Tasija Karosas, Jordan Surhoff, Mimi Schneider, and Rebecca Millard teamed up to swim 1:36.32. That time, over a second faster than last season’s Big 12-winning swim, would have taken fourth place at last year’s NCAA Championships.

The fight for second raged between Kansas and Iowa state, but Kansas’s Yulduz Kuchkarova’s 25.28 backstroke split had the edge over Iowa State’s Harper Emswiler’s 25.83, and the Cyclones never quite made up the difference.

The Texas men swam 1:24.34 to notch an NCAA ‘A’ cut and outswim last year’s 1:24.46 from this meet (although, they couldn’t quite touch the 1:23.19 that NC State swam earlier tonight at ACC Championships). John Shebat kept the streak going after his amazing swim this morning by leading off the race in an incredible 21.17 50 back. Senior John Murray went next for 24.25 in the 50 breast split. Then, the Singaporean butterfly king Joseph Schooling broke 20 in his 50 fly split for 19.94, and Brett Ringgold came back fast in 18.98.

Texas’s time from tonight wouldn’t have been fast enough for the A final at NCAAs last year, but that’s not anything to worry about, given that the team went a little slower last year at Big 12 Championships and then came back to win third in the event at NCAAs. (The team also last year chose to focus on the 400 medley relay, where they ended up breaking the U.S. Open Record, instead of the 200 medley).

The women of Texas annihilated the NCAA ‘A’ standard in the 800 free relay, swimming 7:00.41 to win the event by 16 seconds. Every one of the swimmers split a low 1:46 or under, and lead-off swimmer Madisyn Cox notched a personal ‘B’ cut with 1:45.02, a time that would have won the individual Big 12 title last year by nearly three seconds. That time also would have won her a spot in ‘B’ finals at NCAAs last year. Freshman Quinn Carrozza split 1:45.02 as the second swimmer, Rebecca Millard split 1:44.56 as the third, and Tasija Karosas swam an anchor-leg 1:44.78 to round out the relay swim.

Kansas’s relay of Haley Bishop, Sammie Schurig, Breonna Barker, and Chelsie Miller notched their second relay silver of the night, securing their place above Iowa State in the Day 1 standings, with 7:16.84. Miller had the fastest leg on the team, anchoring a 1:47.01.

Iowa State’s Kasey Roberts, Silqi Luo, Mary Kate Luddy, and Brooke Evensen nabbed a solid third in 7:19.36. Luo clocked the fastest split of the team, using a relay start to propel her to 1:48.86.

If the Texas men’s 200 medley seemed a little slow, their 800 free relay is back on track with a 6:15.48, which would have been good for fourth place at NCAAs last year, two and a half seconds ahead of their actual NCAAs 8th place finish. This race also marked the first finals swim of the weekend for headliners Clark Smith, Townley Haas, and Jack Conger.

Texas not exactly flying compared to NC State and Louisville…Shebat had a great 21.1 and Schooling was 19.9 but Murray very slow on breast 24.3

Murray will be fast at NCAAs, don’t worry, he drops a lot of time when he tapers

He is a good man.

Yeah I know, it blows my mind he can be a second off what he’ll probably be at NCAAs this close to the meet, but I was always a mid distance guy that didn’t need a lot of taper so I wouldn’t understand haha

Terrific split from Tate Jackson, but he’s almost certainly more rested than Ringgold, who got his cuts out of the way in December. Agree with the above about Murray, though it’s conceivable that Licon could be used for breaststroke as he is on the 400MR. I suspect that Ringgold and Murray will reprise their roles from last year’s relay, with Shebat being the only switch.

You thinking Conger for Shebat? I’m thinking This relay will stay as is… possibly Licon for Murray).

The writer should note, as you noted, that Jackson is tapered, but Ringgold is not.

Justin Pollard clarified it perfectly…more of a writing fail on my part. It’s clearly been a yearlong goal to have Shebat on that relay and likely the 400MR too, basically taking Darmody’s place from last year. Conger is about the same as Shebat in both distances, but will already be swimming a lot.

R&R, I think Chris is saying that Murray and Ringgold will keep their relay positions from last year, while Shebat will be the new backstroker.

Murray likes like a linebacker. He will go a full second faster a month from now. The other 3 will go faster as well.

Possibly but they are going to have to weigh swims on the cusp vs divers and diving points. I could see a few qualifiers staying home this year.

Was thinking the same thing as ‘Zinger. Dunne is probably near-fully rested and is right on the bubble, not a threat to score. Unless he busts out a big 500 tomorrow.

3, Anderson, and Bowersox from last year, and Obrien coming off a red shirt

John Murray is the best taper swimmer of all time. Tate beat him by .20 but ringgold has gone 18 lows for his 50 split.