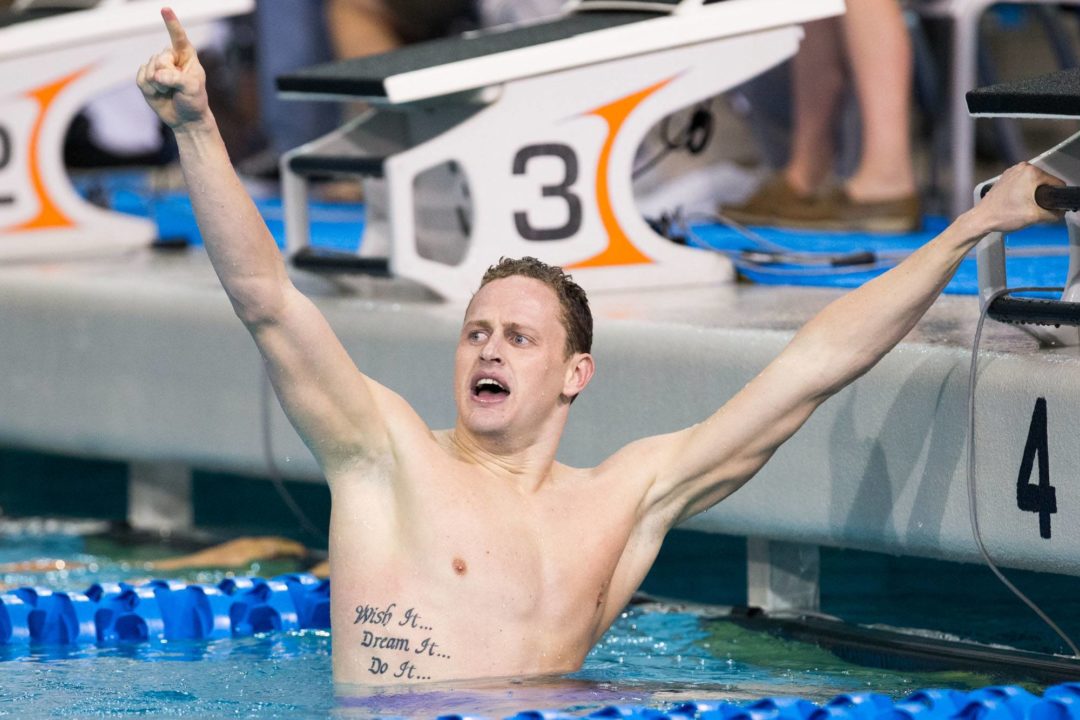 Michigan's Dylan Bosch capitalized on his 200 IM top seed as he led a pack of Wolverines into tonight's B1G Finals where the Maize and Blue's depth dominated. Archive photo via Tim Binning/TheSwimPictures.com

The Michigan men come into Day 2 Finals with the top seed in each of the individual swimming events, laying the groundwork for the road to a repeat B1G men’s title.  The lanes at University Aquatic Center will see its share of Wolverine swimmers sprinkled in more than just the A-Finals, however, as Michigan brings back a total of 9 swims across the entire Finals session.

Anders Nielsen led the field this morning in the 500 freestyle, looking smooth and down-to-business on his way to a new pool record of 4:14.84.  The next closest swimmer to him is Northwestern’s Jordan Wilimovsky, who obviously has speed of his own, but will need to step things up a notch to bring his prelims 4:15.62 time in line with Nielsen’s trajectory.  Michigan has the highest number swimmers ready to score in this particular event, with an additional two in the A-Final, Justin Glanda and PJ Ransford, along with Jack Mangan and Cameron Stitt in tonight’s B-Final.  For its part, Indiana University has the next highest number of swimmers in the event with four total, but just one lone representative in the A-Final in sophomore Jackson Miller.

The 200 IM race will see last year’s B1G runner-up, Dylan Bosch, in the pole position, holding a seed-time almost 2 full seconds faster than the rest of the field, from his pool-record-breaking swim this morning. The real race may instead be for second and third place, with several swimmers in a compact time bracket of 1:44-low to 1:45-low, including Bosch’s freshman teammate Evan White’s 1:44.13 as the 2nd seed and Purdue’s Guillermo Blanco with a 1:44.57 ready to pounce as well.

We saw quite the show of flames in the water this morning during the 50 free prelims, so the same speed should make an appearance across multiple lanes tonight as well.  Michigan’s Paul Powers put himself in the top position with a blistering 19.21 from his prelims swim and was the only participant to earn an NCAA automatic qualifying time from the morning session.  But, another freshman, Ali Khalafalla from Indiana, is hot on his heels, clocking his own speedy 19.46 to position himself in the center of the pool for a showdown with the Wolverine.  Look for Wisconsin’s Cannon Clifton to also be in the mix after experiencing a huge time drop with his 19.52 mark from prelims – a time which represents only the second instance the sophomore has dipped under the 20-mark.  Might be just the ignition Clifton needed to start a string of fast swims to score some major points to close out his sophomore season.

Wow, in an unexpected plot twist, Wisconsin sophomore, Michael Hutchins pulls off the upset over Michigan’s Anders Nielsen in tonight’s Final, just out-touching the Wolverine by a mere six one-hundredths.  Hutchins touched the wall in a winning time of 4:14.00, clearing the NCAA “A” cut and Nielsen was the runner-up by a fingernail in 4:14.06.  Hutchins now owns the pool record, surpassing the 4:14.84 record mark that Nielsen set during this morning’s prelims. They now own the NCAA’s 5th and 6th-fastest times, respectively.  Splits for both men’s races tonight are below (via live results); check out that blistering last 50 by Nielsen to try to wrangle Hutchins in at the end:

Northwestern’s Jordan Wilimovsky bettered his own prelims time, dropping just under a second to touch in third tonight in 4:14.70, which is quite an improvement over his freshman performance at this same meet last year where he finished in 15th with a time of 4:22.08.

Indiana’s sole swimmer in the final, sophomore Jackson Miller touched in 4:16.09 for 4th place, while Nielsen’s teammate, freshman PJ Ransford touched in 4:17.15 for 5th.  The third Michigan swimmer in the final, Justin Glanda, finished in 6th in a time of 4:17.55.  Ohio State’s Brayden Seal (4:18.51) and Minnesota’s CJ Smith (4:19.97) were tonight’s 7th and 8th place finishers and were the only two athletes in eh race to actually added a bit of time to their morning swims; Seal added about seven tenths and Smith was slower by just over a second.

The 200 IM event was a little more cut and dry, at least in terms of the title going to the expected winner tonight in Michigan’s Dylan Bosch.  The junior led wire-to-wire, bettering his 1:42.21 time from this morning to take the win tonight in 1:41.93, a new pool record.  Although this time was just a skosh slower than his 1:41.66 from last season’s B1G championships where he earned 2nd place, Bosch keeps inching closer and closer to his school’s 1:41.14 record set by Kyle Whitaker last year, so look for the South African to perhaps take down that mark at NCAAs.

After Bosch’s victorious fist pump, he turned to his young teammate beside him, freshman Evan White, who threw down his own impressive 1:43.24 to earn the runner-up spot tonight.  White’s time now makes him the 6th-fastest Wolverine on their record books in the event and his performance should be enough to get him the invitation to NCAAs, as last year’s invite time sat at the 1:44.71 mark.  A third Wolverine was added to the mix in tonight’s final with Tristan Sanders claiming 5th in 1:44.71 to add even more points to the Michigan booty.

Finishing 3rd in the race was Purdue Guillermo Blanco, who touched the wall in 1:43.87 as the only other swimmer to dip under 1:44 – a massive time drop for the senior whose previous best time was a 1:46.56 from the Minneapolis Grand Prix last November.  Two Indiana swimmers were also able to make an impact, as senior Mike Hurley earned 4th in 1:44.15 and freshman Blake Pieroni finished 7th in a time of 1:45.54 to give the Hoosiers 27 points from the event.

The Michigan men took advantage of their depth in the men’s 50 free race, where the Wolverines claimed 1st, 2nd, and 4th for a big 52-point punch.  Freshman Paul Powers blasted to a 19.30 (9.27, 10.03) for the win, which was just a tad slower than the 19.21 he crushed in prelims.  Teammate Bruno Ortiz moved up a spot from last year’s 3rd-place finish in the event, clocking a swift 19.48 tonight to mark his fastest of the season.  Wolverine Vinny Tafuto came in 4th with his time of 19.62, so both Ortiz and Tafuto may need to rely on a last chance meet if they want the chance to nail down an NCAA automatic qualifying or invite time, as last year’s invitation was extended to those with at least a 19.46.

Penn State’s solid performer, Shane Ryan, dropped a tenth from prelims to earn 3rd tonight in 19.49, one position lower than his 2nd place result from 2014’s B1G champs where he went 19.36.

Wisconsin’s Cannon Clifton took 5th in 19.69, while Indiana’s freshman Ali Khalafalla fell four spots from his 2nd seed after prelims to wind up 6th tonight in a 19.75.  Two Buckeyes finished off the race in 7th and 8th, as Josh Fleagle touched in 19.76 to his teammate Michael DiSalle’s 19.88.  With Fleagle’s season best at 19.60 from the Ohio State Invite all the way back in November, one might have expected him to produce a little more for the Buckeyes tonight.  As for DiSalle, his time in the finals is the first result under the 20.0 mark for him so far this season.

The Wolverines capped off an action-packed night with a phenomenal win in the 400 medley relay.  Michigan’s collective time of 3:04.92 set by Aaron Whitaker, Richard Funk, Dylan Bosch and Bruno Ortiz  rockets the team to #2 in the nation, only behind Alabama’s 3:04.22 set at last weekend’s SEC championships.  Michigan’s time tonight also sets a new pool record and B1G record and  is just two tenths off of the school’s record….at a stellar program like the University of Michigan, that is absolutely saying something!  Splits are below, alongside that of the Alabama relay from last week, as comparison insight:

The Final was notably faster this year, as the Michigan’s title-winning time from last year was a 3:06.08, with Ohio State again in second with a 3:06.63.  Penn State actually finished 4th last year in 3:08.01, so their 3rd place here is a marked improvement.

Hutchins. Wow, didn’t see that one coming. Thought it would be Michigan all the way.

Funk and Ortiz with some fast splits on their legs of the medley relay. Solid relay all around.

The race for 2nd between IU and OSU may be close. Fleagle was 19.6 in the AM but split 1:33 on a 800 Relay which was missing two of four swimmers due to a flu- bug which hit on Day1 of the meet. Fleagle will be fine in the 200 and 100. For the Bucks to get 2nd they need to get healthy first. Especially with two more free relays yet to swim.

Hats off to The Michigan Freshman class.