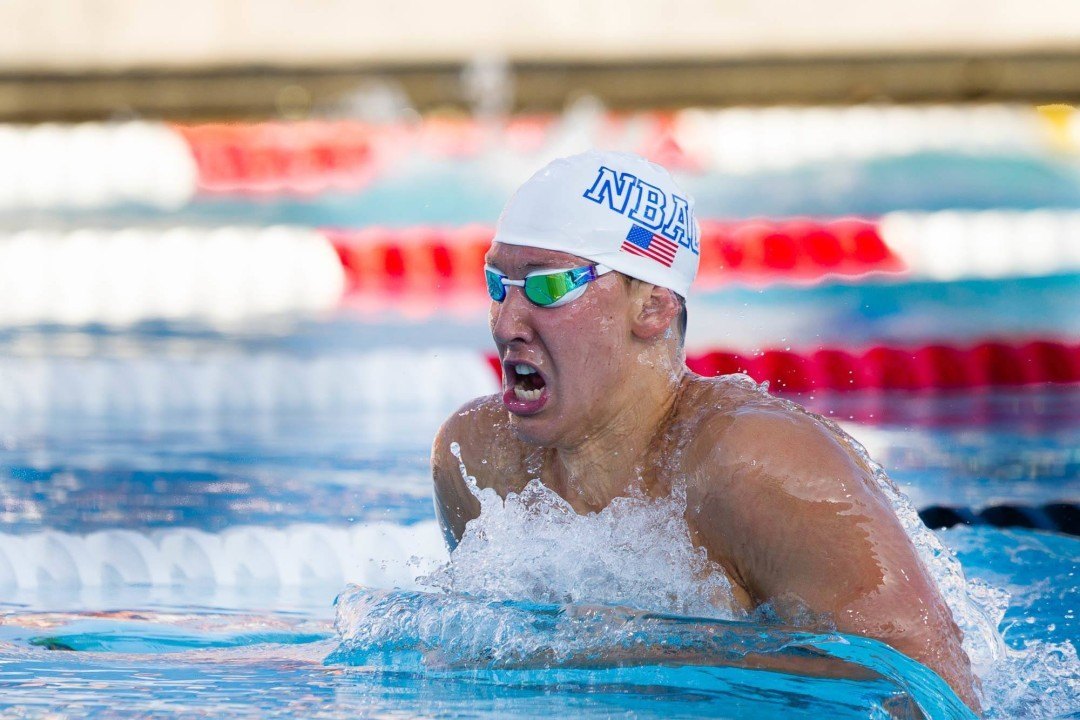 Chase Kalisz (above) has a monster breaststroke leg... come to think of it, his other three legs aren't too shabby. Archive photo via Tim Binning/TheSwimPictures.com

America’s next IM star, Chase Kalisz, had a sizable lead going into the breaststroke leg of his 400 IM at NCAA finals last year. If there’s one thing you don’t want when racing Kalisz, it’s to be behind after fly and back. Kalisz split a 59.41 on the breaststroke and then came home in a 50.93, the fastest of the field in both. Somewhat surprising, though, was his backstroke split of 54.12; he was the only swimmer in the A or B final under 55 on that leg of the race, and while it’s pretty evident that the guy is versatile, Kalisz is more often seen as a secondary 200 breaststroker or butterflier.

The Georgia Bulldog goes into the meet as the top seed again, though his 3:38.39 this season is a ways off his seed time of 3:36.89 last year. Perhaps he didn’t come down as far in his taper for the SEC Champs this year (his season bests pre-NCAAs were from the SEC meet both last year and this year) in hopes that NCAAs would be his only full taper, but resting speculations aside, he hasn’t been quite as fast as last year.

While he won by over three seconds last year, some of the field will be closing in on him more so than in 2014. Only Kyle Whitaker has graduated from the 7 other 2014 A finalists, and among the 6 returners (who aren’t Kalisz), 5 have qualified again. Josh Prenot (Cal) comes in with a seed time of 3:38.83, as he and Kalisz are the only two that have broken 3:40 yet this season. (Fun fact: HS senior Andrew Seliskar would be the top seed with his record-breaking swim at the Potomac Valley Senior Champs recently). Prenot had a great summer in 2014, finishing 3rd in both the 400 IM and the 200 breaststroke at US Nationals, earning him a spot on the Pan Pacs team. There, he was able to swim in the A final of the 200 breast due to a Kevin Cordes scratch (only two from each country are allowed to swim in the A final at Pan Pacs), and he went on to finish 4th. Prenot is a swimmer on the rise, and after his dominant performance to take the 400 IM title at Pac 12s, he could continue to improve and dip below the 3:38 mark and possibly more.

Dan Wallace touched 2nd last year (3:38.17) just ahead of Prenot, and the Gator is back as the #8 seed. Wallace is one of three Gators seeded in the top eight this year; the other two are senior #4 Carlos Omana (3:40.35) and freshman #3 Mark Szaranek. Omana came in last year seeded with a 3:44 but fell all the way down to 3:49 in prelims, while Scottish first Szaranek (Wallace’s country-mate) is a bit of a wildcard in his first yards season. Wallace is a pretty safe bet for top three along with Kalisz and Prenot, while Szaranek and Omana are both pretty up in the air as neither have finaled in this event before.

Szaranek is just one of five freshman seeded in the top ten this year. The other four are #5 Gunnar Bentz and #10 Jay Litherland of Georgia, #7 Sam McHugh of Tennessee, and #9 Curtis Ogren of Stanford. These are all first years who led fruitful high school careers, and each have lived up to the recruiting hype. Notably, for teams like Georgia and Florida, swimmers like Wallace and Kalisz will leave behind plenty of talent once they’re done swimming at the collegiate level.

Dylan Bosch (Michigan) is best known for his NCAA record-breaking performance in the 200 butterfly last year, which also broke the U.S. Open record as well as dipping below the 1:39.65 American mark held by Michael Phelps and Tom Shields. The South African was ineligible to break that record, but until Jack Conger‘s Big 12 time trial, that was the fastest yards time ever (though he still holds onto that NCAA record). Bosch happens to be a great IMer, and the junior is seeded 6th this year with his eyes on the A final once more.

#12 Steve Schmuhl (Indiana) and #13 Will Licon (Texas) both made the A final last year. This is Schmuhl’s senior season, and the Hoosier has been as fast as 3:40.64 from last year. Licon has pressure as the Longhorns’ best IMer, and his ability to push into the A final could help them out a lot in team scoring. He’s had a great sophomore year, though, and beat Cordes in a head-to-head 200 breaststroke in a dual meet. Licon is a tenacious racer who has the endurance and dexterity to crack 3:40 this year.

I think Christian McCurdy from NC State is worth keeping an eye out for.

I see you guys have no belief in the taper king

It is indeed hard to believe Seliskar is currently a 3:37.. He could crush the record in 2-3 years

Both Josh and Licon are improving and will probably go PB’s. I hope they catch Kalisz.

you always prove how delusional you are, Calswimfan

I understand that since there is this battle between Texas and Cal, and you being named Calswimfan, that you are trying to keep things respectful on here, but that does not mean you have to cater to Texas fans with Licon. Licon had a PR at conference, we have no idea how much faster he can go. If he broke 3:40 I would be surprised.

Stanfordad- I am assuming you are referring to Calswimsfan’s delusion of Prenot catching Kalisz. While I agree that it is unlikely that Prenot will catch him, he has undoubtedly had an incredible season thus far, and has the best shot of anyone else in the field of catching him. Just because you are from… Read more »

Correction- Licon did not PR but was fairly close. Still hold my position of being surprised if he broke 3:40.

Hey STANFORDAD, I have no problem being delusional. Trying to be rational hasn’t really helped me predict any outcomes anyway. But I do think both Josh and Will are going to hit PB. I like both of their progressions. And when I said I hope that they can catch Kalisz, did I in any way imply that it will be likely? In fact, I think it’s going to take some good amount of luck for them to do it. But I still hope they do.

Also, SAMH, I know my name says CALSWIMFAN and Cal is indeed my favorite team by far. But that doesn’t mean I can’t cheer for other guys as well. I have one or two… Read more »

I bet you were very surprised after that race

I’m going to have a lot of fun following the NCAAs. But, once the water vapor has settled, I’m excited about watching 18 year old Seliskar in the run up to Rio in 2016. He’s steadily improving. Not only was his 400 yard IM surprising, 3:37.52, his long course 200 butterfly is the second fastest time in the world in 2015. It was only beaten by Japanese star Daiya Seto. By the way, he’s a Cal declare.

Chase Kalisz continues to improve his backstroke month after month. He knows it was his very weak stroke and that he had to improve it a lot before Rio if he wants to win the gold there. Gunnar Bentz has a so big potential. Much better long course swimmer. Still has to improve a lot his backstroke too. World and olympic contender in the next years without any doubt. I write that about him since 2011. Hopefully he will make me right. I’m confident.
You add Seliskar and you probably have the 3 US names who will battle for the 2020 olympic spots in that event.
The US men’s 400 IM future looks very bright in the next decade.