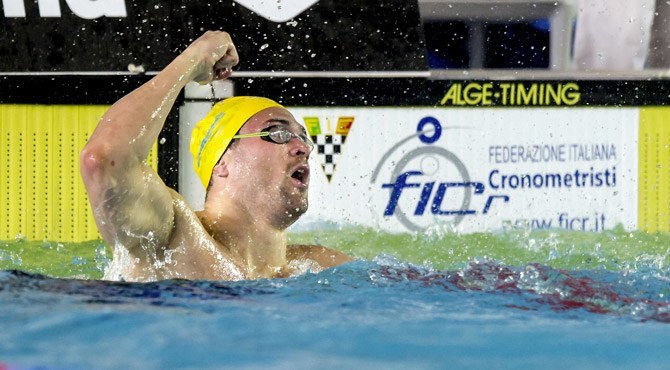 The Italian Spring National Championships and World Championships Trials opened in Riccione on Tuesday, with 621 athletes from 139 teams. The meet is doubling as a selection meet for the Italian team who will compete at 2015 FINA World Championships in Kazan, Russia. The Italian qualifying standards for Kazan are more difficult than what we saw two weeks ago in France. We have outlined the standards in our Day One recap here.

Arianna Castiglioni (Yellow Flames / Team Insubrika) defended her title with 1:07.55, just off the Federation’s standard for Kazan, but good enough to represent Italy on the medley relay. Castiglioni will join Margherita Panziera (back), Ilaria Bianchi (fly), and Erika Ferraioli (free) on the relay in Kazan. Speaking to the press, Castiglioni said she was disappointed to have missed the qualifying standard by so little, especially after having gone a best time of 1:07.09 in Milan last month. “I just wasn’t able to come back fast enough on the second 50,” she rued.

Ilaria Scarcella (CC Aniene) dropped 1.2 seconds between prelims and finals to finish with a silver medal and a new personal best of 1:07.66. Martina Carraro (Blue 91) and Giulia Verona (SMGM Team Lombardy) tied for third in 1:09.45.

It wasn’t the fastest race of the day, with no qualifiers for Kazan, but the three men at the top of the 200 fly put on quite a show. Defending champion Francesco Pavone (Army / Andra Doria) was the first to turn at the 100 wall, and the only one under 56 seconds. Giocamo Carini (Vittorino da Feltre Rowing Club), third in this event at the Junior Olympic Games last summer, was only .13 back, and .16 ahead of Matteo Pelizzari (CC Aniene). Pavone dug in and had the quickest third 50, but the other two outsplit him coming home, making for a tight finish. Pavone got the gold with 1:58.03; Pelizzari, the silver (1:58.23); Carini, the bronze (1:58.89).

Pavone noted afterwards that both he and Pelizzari had thought they’d been faster and were disappointed when they looked at the board.

Veteran Italian sprinter, national record-holder Silvia Di Pietro (Forest / CC Aniene), won the women’s 50 free in 25.04. Although she missed the Kazan cutoff by .14, Di Pietro was happy with her race, saying, “I did better than in prelims. I felt great in the water and I thought I had a nice race.”

Coming to the wall fifth was CC Aniene’s Federica Pellegrini in 25.51. Known for her prowess in much longer races, Pellegrini said with a smile, “I am very happy. I went my second-fastest time, and beat my 25.64 from prelims. It’s not my race but it was fun.”

It was a great end to a strong week for the hometown hero; Sabbioni also finished on the podium in the 100 back (1st) and the 200 back (3rd).

Diletta Carli (Rome Golden Flames / Tyrrhenian) dropped 3.4 seconds from her previous personal best and won in 8:31.54. Although she missed the Kazan cut, Carli was very happy with her swim. And with good reason; she swam her own race, holding 1:03-high for most of the race, and didn’t concern herself with where defending champion, Aurora Ponselè (Naples Golden Flames / CC Aniene) was. As Carli explained afterward, “This race was typical for me. Aurora started off quickly, as she usually does; I preferred to build up, rather than to stay right behind her.”

Luisa Trombetti (Rome Golden Flames / Turin) picked up a new personal best, winning the 200 IM in 2:13.42. Trombetti won the race over the second half, most notably thanks to a breaststroke leg that was the fastest in the field by nearly a second. Trombetti was in sixth place after the backstroke, but moved into second with the breast, and then overtook Ilaria Cusinato (Team Veneto), who had the lead at that point, over the last 50 with the second-fastest freestyle leg.

33-year-old Filippo Magnini (SMGM Team Lombardy) took the final title of the night in 1:48.22. “A good time, but nothing special,” he admitted after the race. “It was a tactical race.” As he had already achieved the Kazan standard earlier in the week he was able to concentrate on winning the race, and not on getting a specific time. “I raced it differently, and in the last 50 meters I still had a lot of energy.” Indeed, Magnini’s splits were very even (25.07-27.7-27.7-27.8).

Marco Belotti (Forest / CC Aniene) placed second in 1:48.52. He had been in the lead at the 100 but had more trouble coming home. Andrea Mitchell D’Arrigo (Aurelia) earned the bronze medal with 1:49.07, thanks to a strong back half. D’Arrigo out-touched Gianluca Maglia (Yellow Flames) by .07 and Damiano Lestingi (CC Aniene) by .09.