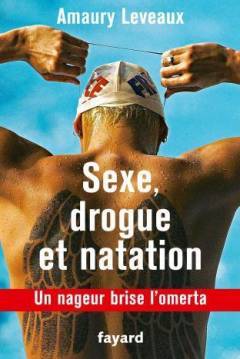 Amaury Leveaux, the Bad Boy of French Swimming, is in the news again. Leveaux, who has held the SCM world...

Amaury Leveaux, the Bad Boy of French Swimming, is in the news again. Leveaux, who has held the SCM world record in the men’s 100 free (44.94) since the 2008 European Championships in Rijeka, Croatia, has written a “tell-all” book, going behind the scenes of French swimming. “Sexe, drogue et natation: un nageur brise l’omerta” or “Sex, Drugs, and Swimming: A Swimmer Breaks the Code of Silence,” comes out on Wednesday, April 22, and already it is getting a lot of media attention.

The weekly “Journal du dimanche” published several extracts today, and Leveaux has given interviews to various French media outlets. Leveaux tells L’Equipe that he wrote the book because since his retirement in 2013, people often say he isn’t anything like the image they had of him. He was often portrayed in the media as “the guy who doesn’t care, who is extravagant, who is a bit impolite… and in fact, it’s the opposite. I wrote the book to set the record straight.”

But as the journalists are quick to point out, he may actually have done more to stir things up than to calm the waters. Never one to mince his words, Leveaux apparently takes on much of the world of French swimming. Beginning with the Federation, whom he calls dinosaurs who want to play the system, all the way to his fellow members of the National Team, Leveaux has something to say about nearly everyone.

And yet, from early reports, it seems that for the most part, Leveaux stops just short of naming names. For example, he talks about a “darling of the French public” whom he sees at a party during the London Olympics snorting cocaine from between the breasts of one of the press attachés. When the journalist asks, “aren’t you putting everyone (on the London team) under suspicion?” Leveaux responds, “there’s no suspicion. A guy did something. If he recognizes himself, he recognizes himself.”

Leveaux goes on to say that he enjoyed the occasional line of coke, too, but that some of the swimmers used cocaine as a performance enhancer, and that even the coaches had some idea of what was going on. Yet again, he doesn’t point fingers at any one person.

Leveaux also throws a collective jab at the Marseille swimmers, such as Fabien Gilot, Frédérick Bousquet, Florent Manaudou and Camille Lacourt, who he says are show-offs, and are full of themselves. “For some of them, their behavior is nowhere near as nice as their muscles.” Yet at the same time he admits that he had tried to join Marseille, known for its sprint program, after London to prepare for 2016, but only one of the swimmers wanted him; the others said no.

One swimmer for whom Leveaux holds nothing back is Cesar Cielo, whom he accuses of doping. “Cheaters are like pedophiles. A bullet to the head. Maybe I’m being extreme.” Cielo won gold to Leveaux’s silver in the 50m free in Beijing in 2008.

And yet Leveaux insists he is not bitter. He just felt there were too many “dumb” memoirs and autobiographies; he wanted to tell his own story.

I LOVE IT. He’s always been one of my favorites because of his underwaters and personality. Not your typical swimmer. Let’s it hang loose. And I love the the tattoos (wings on his back).

Amaury has the best tweets. I particularly remember his ‘Gypsies in Paris ‘ series .

I’ve had to undergo therapy to unknow known unknown knowns after reading some bios including & especially Thorpe’s.

But this sounds fun.

Since I’m not sure this one will get an English version, can the site pay for Bobo to get a copy and translate/summarize the fun parts for us?

Bonus points for any bilingual person who has also read Amanda Beard’s book, and can find places where juicy bits align and seem to verify each other.

Ask rather Anne Lepesant. I believe that she’s perfectly bilingual.