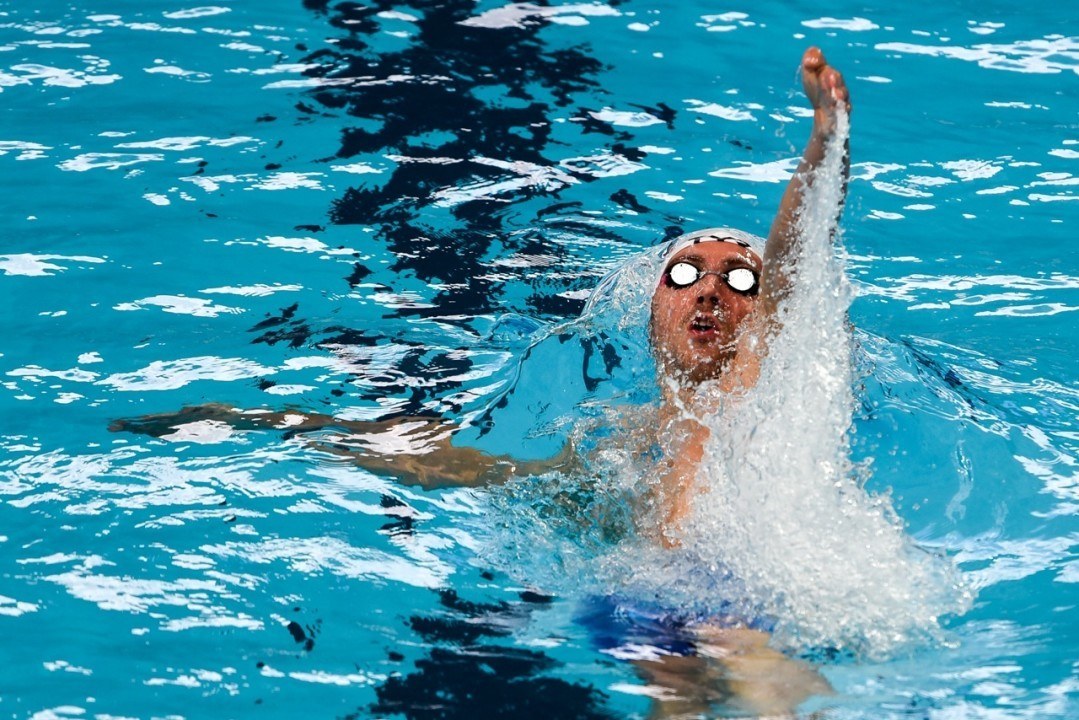 On Day Two of the French national short course championships, the pool deck in Angers was all abuzz about the forfeiture of Florent Manaudou in the heats of the men’s 100 meter freestyle. It was a petulant move by the sprint star, one that had more to do with how he felt about his poor performance in the 50 free the previous evening than his state of readiness for the 100, according to his coach, Romain Barnier. Barnier told the French press, “I do not support this behavior. I find it unbecoming of an Olympic champion, unbecoming of a member of the French national team, unbecoming of a member of CN Marseille, and unbecoming of someone who means a lot to French swimmers. I totally disapprove of his behavior. This is the bad side of Florent. We’ve all got one, but when he shows his, it’s something I don’t like to see. He’ll have to live with the consequences.”

On a more positive note, Jérémy Stravius continued his one-man-show of swimming excellence on Friday. After a pair of gold medals on Thursday, the heretofore backstroker from Amiens added a bronze in the 800 free and a gold in the 400 IM. In the women’s meet, Mélanie Henique broke a French national short course record in the 50 fly.

Night Two began much as Night One had: with a distance free victory by Sharon Van Rouwendaal of Netherlands (8:16.53). Because she is not French, however, she gave her place at the top of the podium to runner-up Coralie Balmy of Antibes (8:23.76), crowned French national champion. Van Rouwendaal, who trains in France under coach Philippe Lucas, dropped 9/10 off her seed time of 8:17.44. Balmy was about 5 seconds off hers.

Second and third went to Ophélie-Cyrielle Etienne of Lille/Marseille and Aurélie Muller of Sarreguemines (world champion in the 10K at Kazan, and the first woman swimmer to qualify for Rio), respectively. Etienne improved her seed time by 6.1 seconds to touch in 8:24.86; Muller clocked a best-by-15.3 8:29.46.

In the men’s edition of the same event, Amiens’ Stravius took on France’s top distance swimmers and nearly beat them at their own game. Stravius, who so far at this meet looks like he’s enjoying racing for the sake of racing, led the field through the first 500. The erstwhile backstroker came in to the event seeded fourth with 7:50.00* and finished third with 7:45.73. Eventual winner Joris Bouchaut of Toulouse, took over the lead at the 550, having begun his descent at the halfway mark. Damien Joly of Antibes, one of France’s most decorated distance swimmers, placed second with 7:42.45.

Sprinter Mélanie Henique lowered her own French national record in the 50 meter butterfly, obliterating the field with 25.20. She was .13 faster than she had been last November when she set the record at short course nationals in Montpellier. Henique’s underwaters were particularly impressive; she was able to pull away from the competition from the outset and increased her lead to a body length after the turn. Henique spoke to the press following her race:

“I am really happy because 25.2 is starting to look interesting, even though it’s just short course. I’m happy because I haven’t really done anything to prepare for this meet, even less so in butterfly. I’m happy with the work we’ve done up to now; I think we’re on the right road. We’ll see on Sunday what the 50 free brings. We really haven’t done anything special to prepare for short course nationals. Yesterday I had some trouble getting started, but I’m happy to have this level of performance today. It bodes well for the future.”

American Lara Jackson, swimming under the banner of Vichy, came in second at 26.00, while Armony Dumur, who broke the NCAA Division II record in the 100 yard fly swimming for Wingate University last season, finished third with 26.41. Dumur nonetheless picked up the silver medal, while Nice’s Marie Wattel earned bronze with 26.58.

French backstroke events have traditionally been crowd-pleasers thanks to the depth of the talent pool, and to the friendly rivalry between Marseille’s Camille Lacourt and Amiens’ Stravius. Although the latter wasn’t entered in the event (it’s just about all he didn’t swim), it didn’t mean there wasn’t a good race to be had. Lacourt and CNM teammate Benjamin Stasiulis, who had posted the morning’s top time of 24.18, traded stroke for stroke for 23-and-a-half seconds before Lacourt got the win with 23.46 to Stasiulis’ 23.68. Eddie Moueddene of Amiens placed third with 24.39, about 6/10 better than his entry time.

Lara Grangeon of Calédoniens picked up her third gold medal of the meet with a 2:32.12 finish in the 200 breaststroke. Camille Dauba of Sarreguemines put together a terrific second half and passed Adeline Martin of Antibes at the end. Dauba picked up the silver medal by 1/100, out-touching Martin 2:24.92 to 2:24.93.

Stravius followed up Thursday’s win in the 200 IM with a matching performance in the 400. Like in the shorter race, he was untouchable over the first half of the race. Stravius took the butterfly out hard, building a margin of nearly two body lengths heading into the backstroke. He continued to distance himself from the field, and led Ganesh Pedurand by more than 3 seconds at the back-to-breast turn; Pedurand outsplit him by 5 seconds on the breaststroke leg. Meanwhile, Quentin Coton of Antibes overtook both of them to lead Pedurand by 1 second and Stravius by 2.5 headed into the final 100.

There were some big swims from the younger generation, too. Alexe Herthe of Chalon-sur-Saône came into the meet with a seed time of 1:06.44. In heats she dropped nearly 2 seconds to qualify for the B final with 1:04.58. At night she took another .58 seconds off her time and broke the national age group record for 15-year-old girls with 1:04.00. Herthe ended up fifth in the B final, which was won by sprinter Anna Santamans of Nice (1:02.11).

Manaudou’s absence in the 100 free was not much of a distraction by the time finals came around. His teammate Mehdy Metella did a nice job with underwaters and added another gold to his haul, after winning the 100 fly title on Thursday. Seeded with 46.69, Metella swam a solid 46.89 in the final to finish a half-second ahead of Mulhouse’s Yannick Agnel, who touched in 47.40. Agnel had been the fastest out of the morning’s heats with 47.51, followed by the Marseille teammates Metella (47.59), Grégory Mallet (48.04), and Fabien Gilot (48.19).

In the final, though, it was Amiens’ Moueddene who came into the wall third, grabbing his second bronze medal of the night with 47.82.

Afterwards, Metella declared, “It’s always nice to win and to ascend the podium. No one likes losing so it’s still important to do one’s best in this 100 free, despite feeling tired. I didn’t feel like the favorite tonight. We are really exhausted from the work we’ve been doing and I am happy to have gotten through this race.”