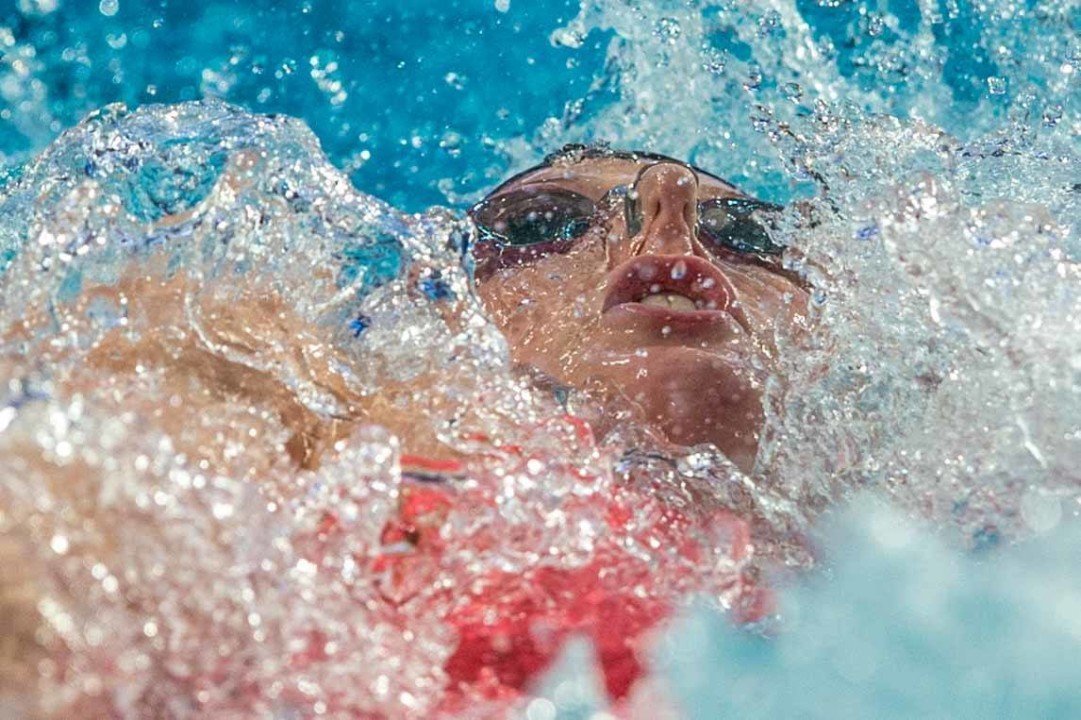 Missy Franklin wound up with the bronze in a fierce 200m backstroke showdown with Seebohm and Hosszu. Archive photo via Mike Lewis/Ola Vista Photography

Hungary’s Katinka Hosszu is heading back to the site of one of her finest performances of 2014, the Hong Kong stop of the World Cup. But she says matching her medal haul from a year ago will be a tall order.

Today marks the start of the second cluster of the 2015 World Cup Series, as swimmers have descended upon Hong Kong. In addition to the normal prize money available, there will also be an addition $300,000 split between the top 6 male and top 6 female finishers after the first two meets.

Chad Le Clos (RSA) and Mehdy Metella (FRA) won this event in Moscow and Chartres, respectively, but neither are present in Hong Kong.  Japan’s Katsumi Nakamura took advantage of their absence and cleaned up the men’s 100 freestyle in a time of 49.48.  Nakamura just clipped comeback kid Kenneth To out of Australia who is making his international debut post-back surgery.  To clocked 49.52 for 2nd place, followed by his Aussie teammate Dan Smith who settled for 3rd in 49.82.  Of note, To has only missed the podium once out of his 10 World Cup appearances in this event.

Hungary’s Katinka Hosszu threw down her first statement swim of the Hong Kong stop, dominating the women’s 200 freestyle in #IronLady fashion.  Hosszu registered a winning time of 1:55.81, her fastest of this year and the 6th fastest time in the world.  This marks the 12th time in a row Hosszu has won this event in World Cup stops. USA’s Missy Franklin was already a second behind after Hosszu’s first 100, where the Hungarian split 56.19 to Franklin’s 57.09, but Franklin would still go on for silver in a time of 1:58.38.  Hungary also nabbed bronze in the form of Zsuzsanna Jakabos’ 3rd place time of 1:59.51.

South Africa’s Cameron Van der Burgh rocked a 27.23 to comfortably win the 50m breaststroke gold over Aussies Matthew Treloar and Tommy Sucipto who finished in 2nd and 3rd places, respectively.  Treloar touched in 27.83 to Sucipto’s 28.01.  The win by VDB markes his 35th gold medal at the World Cup and ties USA’s legendary Edward Moses for the most gold medals in breaststroke events, male or female, in this century.

Jamaica’s Alia Atkinson was the clear winner in this race, beating the field by almost two full seconds.  Atkinson’s time of 1:07.91 claimed gold while Russia’s Vitalina Simonova came in 2nd in 1:09.63 and China’s Liu Xiaoyu finished in 3rd with her time of 1:09.87.   Atkinson was this year’s FINA World Championships bronze medalist behind Russia’s Yulia Efimova and Lithuania’s Ruta Meilutyte.

Hungary’s Katinka Hosszu got the job done again, winning her second event in a span of just 30 minutes.  Hosszu nabbed gold in the 100 fly in a time of 59.31.  This marks her 2nd World Cup win in the event after already snagging gold in Singapore back in 2013.  Tonight, the only other swimmer to go sub-minute was China’s Li Shuang who scored a 59.74 for silver.  Hong Kong’s Sze Hang Yu wrapped up the bronze in 1:00.30.

A trio of swimmers clocked sub-55 times in tonight’s final, led by Japan’s Yuki Shirai‘s time of 54.39.  Australia nabbed a 2-3 finish, as Ash Delaney registered a 54.78 for silver and teammate Josh Beaver touched in 54.86 for bronze.   For Shirai, this gold marks his 8th across his World Cup appearances, but his first in the 100m backstroke event.  Teammates Junya Koga won this event in Tokyo, as did Masafumi Yamaguchi in Dubai, both in 2011.

Red-hot Australian backstroker Emily Seebohm picked up right where her Kazan performances left off, as the double World Champion nabbed tonight’s 50m backstroke victory in the only sub-28 time of the field.  27.90 for Seebohm was enough to put away the field, including teammate Holly Barratt who claimed silver in 28.22 and Katinka Hosszu who earned bronze (28.49) in this, her 3rd final of the night so far.  USA’s Missy Franklin wound up 5th in 28.87.

Japan earned another gold tonight with Masato Sakai‘s performance in the 200 fly.  Sakai took home the gold in 1:56.25, an overwhelming win in a field whose next fastest clocking was the 1:59.02 registered by Australia’s Nic Brown for silver.  Russia’s Aleksandr Kudashev touched in 1:59.03, just .01 behind Brown, for bronze.  For Sakai, this marks his third total 200m butterfly World Cup medal, but his first gold.

Cruising to victory yet again was Katinka Hosszu, who incredibly wrapped up her 23rd gold in this event across the World Cup series.  Tonight, her time of 2:11.78 was enough for gold, keeping the Hungarian unbeaten in 17 straight World Cups in this event – definition of #IronLady.  Settling for silver in the race was Japan’s Rika Omoto in 2:12.77, followed by Hosszu’s Hungaria partner in crime, Zsuzsanna Jakabos who snatched bronze in 2:14.43.

Australian Dan Smith took the men’s 400 in a time of 3:52.68, knocking almost 7 full seconds off of his time from heats.  Austria’s David Brandl took the silver in 3:53.07, followed by Japan’s Masato Sakaiin 3:53.15, fresh off his 200 butterfly win. For Smith, he earned the 200 free gold in Paris-Chartres, so he’s on a freestyle streak thus far this World Cup series.

Sub-25 swims all.day.long. for the Campbell sisters, as they crank out the gold and silver in Hong Kong.  Cate Campbell came out on top in the 50 today, registering a swift 24.69 to out-touch her sister, Bronte.  Bronte clocked 24.84 to represent the only other swimmer to go under the 25 second mark today.  Denmark’s sprinter Jeanette Ottesen wrangled in bronze in 25.05 for her effort.  For Cate Campbell, today’s gold is her 6th in the 50 freestyle event across the World Cup.

A thrilling battle to the wall sees Japanese swimmer Akihiro Yamaguchi just out-touch his countryman Ippei Watanabe, 2:13.13 to 2:13.14.  Japan is having a heck of a night, claiming its fourth gold medal on the session, all on the men’s side.  The country’s record (outside of a meet in Japan) is five medals in a men’s event in one meet, so they are well on their way, with two men’s events remaining. Bronze in this 200m breaststroke race went to Hungary’s David Verraszto in 2:15.18.

In a huge World Championships deja vu, Aussie Emily Seebohm, Hungarian Katinka Hosszu and American Missy Franklin were all lined up in this incredible 200m backstroke final.  Hosszu, even on top of her previous swims tonight, was able to crush the competition and come out on top with a time of 2:08.61.  More than a second later, Seebohm finished in 2:09.77 for silver, while Franklin settled for bronze in 2:11.23.

Geoff Cheah of Hong Kong claimed the gold in front of his home crowd tonight.  24.23 was what it took to touch first for Cheah, with a charging Kenneth To from Australia right behind in 24.30 to earn his second silver on the night.  Australia also snagged a bronze in the race, courtesy of Te Haumi Maxwell‘s time of 24.33.

Another race, another gold for Hungary’s Katinka Hosszu, who led wire-to-wire in this 800 free to collect yet another top prize in a time of 8:42.88.  China’s Yawen Hou swam into a 2nd-place finish, earning silver in 8:46.80, with Hosszu’s teammate, Zsuzsanna Jakabos raking in another bronze in a time of 9:05.20.

For Hosszu, she completed six events, earning five golds and a bronze just in today’s session…..there’s another one tomorrow.

David Verraszto made it two-for-two for Hungary in the final two events in Hong Kong, touching the wall first in the men’s 400m IM.  4:18.06 gave Verraszto his 3rd consecutive meet win in this event and also gave Hungary its 7th gold medal in the event.  Australia’s Tomas Elliot earned silver in 4:19.82, followed by Kazmir Boscovic for bronze in 4:24.46.

Katinka Hosszu swims fast at every meet. Is her training USRPT so Hosszu camp doesn’t need to rest and taper as much as other swimmers on a high volume program? Is Schmitz a traditional high volume big taper coach by comparison? It seems like if your goal is to win money on the World cup it takes one type of training and Olympics maybe the other.
USA swimming is clearly more olympic focused than World Cup focused.

My understanding is that Todd Schmitz tends to be more of a high volume, “aerobic base,” grinder type but I’m not sure where he’d be on the intensity-volume spectrum.

Hank – Hosszu has won the 200 IM and 400 IM at each of the last two World Championships. While the Olympics can sometimes bring some out-of-nowhere swims….I have a hard time seeing where anybody in the world can catch her 2:06.12 200 IM at the Olympics. Hosszu has shown the ability to both pile up money at the World Cup and get the job done at the end of the year.

Judging Missy’s performances now is completely irrelevant and useless. I remember when she started swimming her first dual meets for Cal, there’s been tons of trash talking about her being so slow, doing less back races and swimming off events she would never do internationally, then everyone blamed her for not turning pro. Afterwards came something called Winter Nationals, then another one called PAC 12, then another one called NCAA. What happened during Pan Pacs was not hers to control either. She could have said “I’m withdrawing, my health is more important.”. But she fought.

Folks, she’s NOT TAPERED, she probably had been doing much more training than rest since Kazan, it’s been barely 4 months since her return with… Read more »

I give Missy credit just for showing up at these World Cups. Competing regularly against the best is what will push her to be great again. Not blowimg out the competition in the Pac 12.

Missy F has lost more 200 back races this year than in all the previous years of her career combined. 😥

It’s one of the few chances for swimmers to actually make a little money. I don’t think the problem lies with FINA here (which is something I won’t say often), it is on the stars to come out and race. I understand that there are significant travel expenses and training considerations that need to be made, but the race experience and opportunity to make some money should be enough to get more swimmers at these meets. Someone like Flo Manaudou could come swim a 50 of each stroke and the occasional 100 free if the competition was weak and make well over $100,000 over the course of the world cup.

Eh. Franklin probably took a small break after WC’s (or at least I hope she did.. get a fresh mindset and get hungry for Rio) and is back in heavy training now. I’m not concerned. She will get the job done.

McKeever: past 2 years
Schmitz: last 3.5 months.
What you’re seeing is past 2 years of training…

That’s very clear to me too : She can’t just erase 2 years of uncomplementary training within 3 months . So for Todd : “Working more on starts for the backstroke , more turns on the frestyle and decent underwaters .” that’s what Missy needs ( + Endurance of course ) . Let’s get crackin Missy , it’s time to waker up .

Missy’s times are so slow.. It looks like she is getting slower and slower