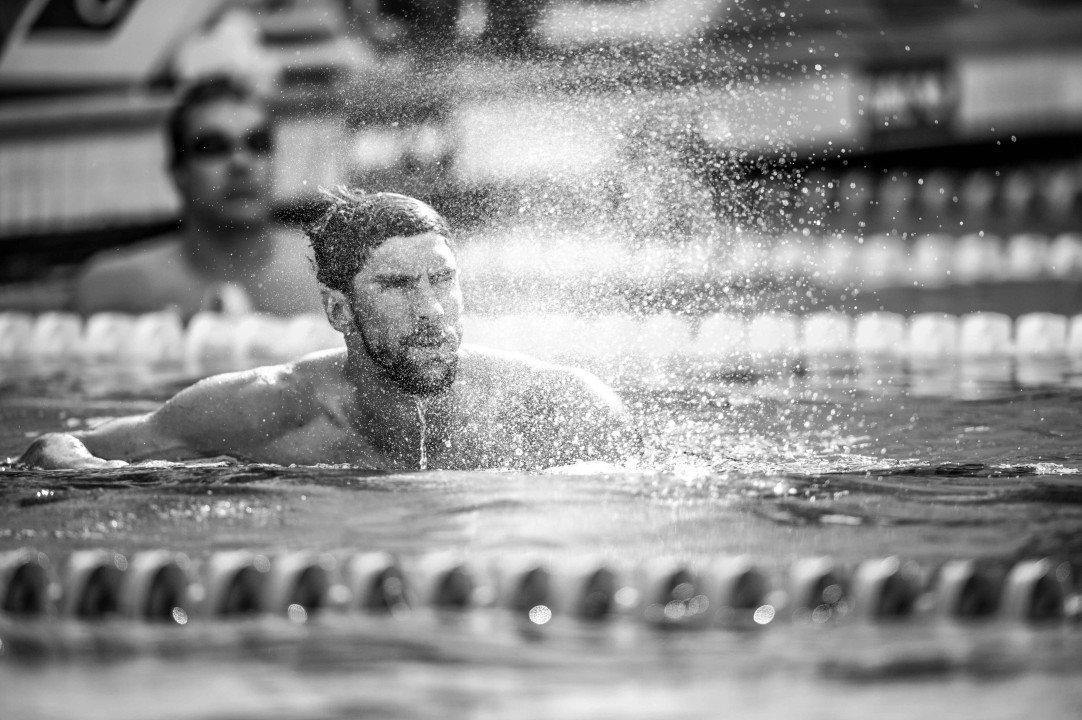 Becca Mann actually outsplit Katie Ledecky through several 50s of her 800 free, coming up with a new lifetime-best swim.

Legendary Katie Ledecky, who won a history-making 4 individual freestyle events at this summer’s World Championships, dropped the hammer on this morning’s heats, clocking a time of 1:57.39. Ledecky’s time was the only sub-1:58 of the morning and sets her up nicely to be in the middle of the pool against rivals Missy Franklin and Leah Smith who sit as the 3rd and 2nd seeds out of the prelims, respectively.  Franklin registered a time of 1:59.17, while Smith scored the only 1:58-mark with a 1:58.13. Other finalists include Allison Schmitt, Melanie Margalis, Cierra Runge, Sarah Henry and Camille Cheng, whose time of 2:00.26 slid the Cal athlete into the final.

A few of the usual suspects top the list of the 8 men moving onto tonight’s final, but one notable name is indeed absent. Michael Phelps swam in the 2nd to last heat of the A flights, but couldn’t keep pace with Cardinal Aquatics’ Joao De Lucca, who won that heat in a time of 1:49.68 for the 2nd seed overall.  Phelps would wind up with a time of 1:51.34 for 10th. The heat prior, Conor Dwyer scored a time of 1:48.95 to take the top seed of the morning, while Ryan Lochte wrapped up the final heat in his mark of 1:49.69 for 3rd seed.  Surprise youngster from University of Louisville, Trevor Carroll rocked a time of 1:49.70, less than a second off of his best of the year to come in as the 4th seed.  Also making the final are Michael Weiss, Matthias Lindenbauer, Bobby Hurley and Giovanny Lima.

Fans hoping to see a stellar Katie Meili follow-up performance to her meet record in Bolzano this past weekend were disappointed, as the SwimMAC Elite star was missing from her heat.  Taking advantage of her absence was University of Louisville’s Andee Cottrell who clocked her 2nd-fastest time of the year, a 1:07.90 to take the top seed.  Meili’s teammate and 2012 Olympian Micah Lawrence also scored a mark of 1:07.90 and will be in women’s final, as will Breeja Larson, Canadian Kierra Smith, Melanie Margalis, Haley Spencer, Melissa Rodriguez and Emily McClellan.

Took some time to have the results made official, but University of Louisville’s Venezuelan breaststroking ace, Carlos Claverie, earned the top spot, touching in a personal best of 1:01.02.  That time wipes his previous personal best of 1:01.56 from the 2014 Youth Olympic Games way off the map.  Closely behind is 2nd seeded Cody Miller, who touched in 1:01.07, a on-the-sluggish time for the Badger Swim Club athlete, yet enough to get him in the top 8. Pro swimmer Michael Andrew clocked a 1:01.08 for the 3rd seed.  Club Wolverine’s Richard Funk hit a speedy 1:01.65 for 4th seed, but he’s been in the 1:00.-low range multiple times this year, so look for him to take things up a notch come finals. Also coming back tonight in the final are Sam Tierney, Yannick Kaeser, Felipe Lima and Andrew Wilson.

A battle is brewing in this women’s sprint fly event, as two-time NCAA Champion and American Record Holder in the yards version of this event, Kelsi Worrell, threw down a quick morning swim of 58.03 to collect a new University of Minnesota Aquatics Center pool reocrd, as well as place herself in the middle of the pool tonight.  But, new mother Dana Vollmer isn’t wasting any time getting back in form, with the former World Record Holder in this event touching in 58.22 to sit just behind Worrell for the final.  Noemie Thomas, Kendyl Stewart and Amanda Kendall were the other swimmers to register times dipping beneath the 59-second threshold.  2012 Olympian and new-to-South-Florida swimmer Claire Donahue wound up in the 6th seed with her time of 59.07, followed by Dayna DePaula in 59.30 and Farida Osman in 59.76.

In one of the marquis events of this meet (as if every event isn’t a marquis race), the upper echelons of fly society made tonight’s final.  Canadian Santo Condorelli brought the heat early, taking the top seed in a time of 53.25, less than a second off of his personal best of 52.42 from this summers’ Pan American Games. Sitting just .02 behind is 31-year-old Ryan Lochte, who touched in 53.27 to position the SwimMAC Elite athlete nicely to take on the stacked field. Phoenix Swim Club’s Giles Smith wrangled in the 3rd seed with his mark of 53.28, while the studliest of ties comes in as the 4th seed. Michael Phelps and Michael Andrew, both in heat 7, hit the wall 53.70. For each, it was his 2nd race of the night, as Phelps swam the 200 freestyle (10th) and Andrew raced the 100 breaststroke (3rd).  Also in this men’s 100 fly final are Masa Kishida, Matthew Josa (red-shirting this year from Queens University) and Pavel Sankovich.

It took North Baltimore Aquatic Club’s Becca Mann the entire 400m IM to hold-off the ever-dangerous Katie Ledecky, but the 17-year-old was able to do it en route to clocking the morning’s fastest time of 4:42.27. Ledecky was less than two tenths behind in her 2nd-fastest time of her career in this event, a 4:42.43.  4:41.70 is what Ledecky registered in June of this year to put the women of this event on notice that the quadruple World Champion is a real contender in this multi-discipline race.

Elizabeth Beisel came in 7th. this morning with her mark of 4:45.30, followed by Cal Aquatics Caitlin Leverenz‘s time of 4:46.02. Among those qualifying for the B-Final

NBAC’s Chase Kalisz led the men this morning, finishing in a time of 4:19.30 to mark the only sub-4:20 time of prelims.  Over 8 seconds later came Club Wolverine mainstay and newly-minted 1500m freestyle American Record Holder, Connor Jaeger, who touched in 4:27.45. Yet another University of Louisville Cardinal made another final, as team captain Nolan Tesone did what he needed to do to make the final, earning the 4th-fastest time of his career in 4:28.32 for the 3rd seed. Sebastian Rousseau, Luke Reilly, Kyle Whitaker and John Bushman take up spots 4-8 of the top race tonight. Of note, just outside of the final in 9th place was 15-year-old Kieran Smith of Ridgefield Aquatics earned a time of 4:32.54, near the top of his best times ever, and a huge improvement on the range of 4:55 he was in just one year ago.

Phelps swims 1:51.34 for 10th , no A final . In many ways , it’s a positive sign he swam slow , as it confirms he’s hard at work again and will continue to swim slow times in season before throwing down the gauntlet come Olympic Trials

Then, always good signs in-season for Phelps….
If he swims slow it confirms he’s hard at work again. If he swims fast it’s obiousvly all ok.., so, according this view, all is good.
In my point of view, if Phelps swims 1.51.3 the 200 free is pretty disappointing.

He’s no longer as young as he used to be – he can’t recover as quickly and so we can’t expect the same level of consistency as we’re used to in the past.

Anyway – we’ll see how he does in the finals session tonight. At least he isn’t scratching the 200fr

I would be more concerned if he was swimming fast. Phelps was always known for swimming slow in season compared to others and considering how impressive he was in August I can’t see him falling that far off the cliff if he was taking it easy.

Well.. if he swims a good 100 fly.. it might show his free is not exactly on the same level of his fly.. Also he will now have 2 races a day, not only 1.. We will have a chance to evaluate how his recovery is now..

A) You stole my username so now i have to change it up. Thanks.

B) Phelps has always been a huge taper swimmer, and that’s going to be even more noticeable with his age and him still training under Bowman. Its a huge gamble that it works come trials, but in the past that taper has earned him 22 olympic medals, so they obviously know what they’re doing. What you see other swimmers do is take mini-tapers in season, maybe a few easier days, so they can race fast at any time. Phelps won’t ever do that, because he’s going to stick with the traditional method of huge in-season workloads and massive time drops at taper.

In one respect, he DID swim slow. In another, everyone is sort of swimmin slow, aren’t they? For a prelim having just 6 swimmers under 1:50, at a ‘marquee meet’ such as this one, it does show that many of rhtese swimmers are in the heart of their fall training. Likely one more taper either in December before Trials.

McBroom was off, Jaeger was off, Clary was off, Kalisz in their 200 Free’s. Then, when you jump to the fly, the fastest seed is 53.2??? I definitely think either they are swimming slow due to their traiing, or perhaps the Minnesota pool is not really fast?? I swam in it and did my best times there, so I don’t quite… Read more »

Agreed – MP looks tired, and he also jammed the wall on his 100m fly turn.

But a tired MP means a training MP 😀

Andrew was racing Phelps and tied him , 53.70 for both swimmers ?? should be a good final tonight !

Andrew’s hopes for the 2016 Olympics certainly aren’t dead at this point… Should be interesting to see how he does tonight.

Maybe expecing too much,.. his 100 fly is WAY below Phelps and Shields..

He also would need to drop more than 1 second on 100 breast, but the 100 breast is actually the one he is closest to qualify..

His 100 back is also way below Greevers and Murphy.

completely agree that 100 breast is probably his best shot