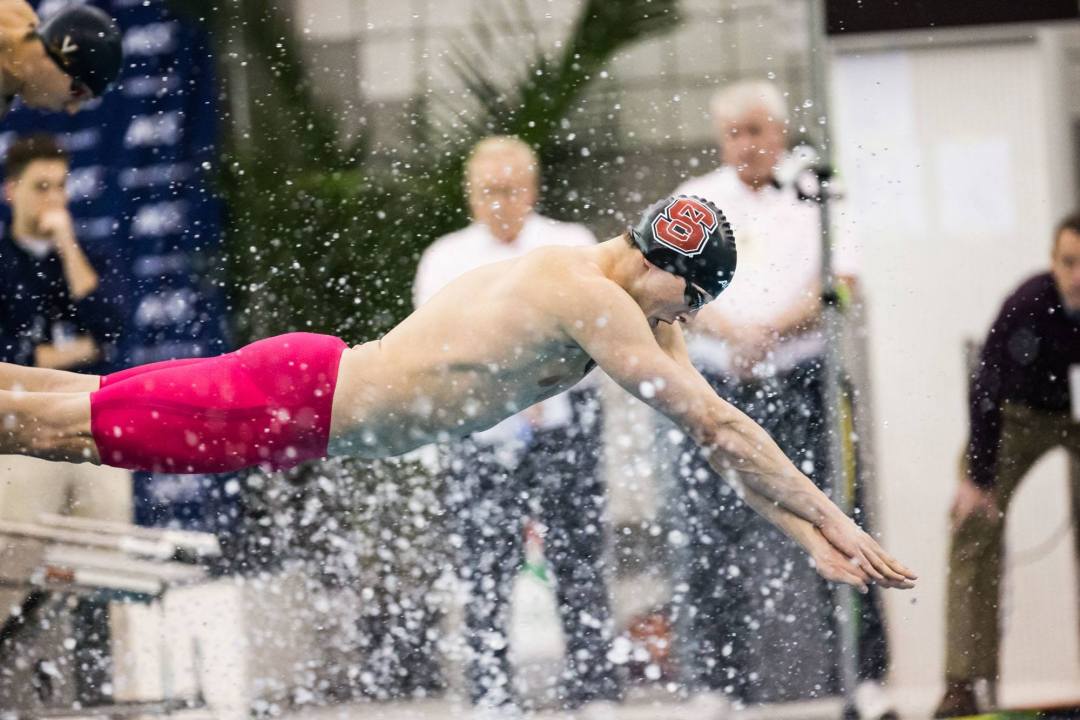 Day 1 of the Men's ACC Championships kicks off with the 200 medley relay and the 800 freestyle relay. Archive photo via Tim Binning/TheSwimPictures.com

Day 1 of the Men’s ACC Championships kicks off with the 200 medley relay and the 800 freestyle relay. On paper, the Louisville Cardinals look to be the favorite to win both events, with NCAA “A” cuts in both relays. The fun part about relays at college championship meets, however, is that the psych sheet doesn’t need much. Relays are all about momentum and being the best in the moment.

Virginia Tech has a substantial lead with 247 points from diving, but with the ACC’s A, B, and C scoring finals, VT can definitely be reeled in. Diving will give the Hokies a bit of a cushion, but it will be up to NC State an Louisville to run them down in the pool. With 64 points available for a relay win, all of the teams will be putting it on the line to grab early points.

NC State wins the first event of the meet with the second fastest time in the country this year and an NCAA “A” cut time of 1:24.07. The team of Andreas Schiellerup, Derek Hren, Soeren Dahl, and David Williams combined to win the event, finishing about a second ahead of the field. Texas is the only other team that has been faster than them this year at 1:23.88. David Williams appears to back in form with an electric 18.55 anchor split, and Schiellerup led of with a 21.30 backstroke split.

NC State claims their second victory of the meet with a new ACC record and the second fastest time in the country this year of 6:13.14! The team of Soeren Dahl, Simonas Bilis, Ryan Held, and David Williams combined to run away from the rest of the field, winning by close to 7 seconds ahead of Louisville in second place. Dahl should be locked in for NCAA’s with his lead off time of 1:34.02, which will tie as the seventh fastest time in the country this year. Bilis really stepped up for NC State, however, with a 1:32.05 split. Held added 1:33.63 split and Williams anchored in 1:33.43. They are second in the country to Florida, who was 6:12.85 last week at the SEC Championships.

Five teams finished under the NCAA A standard time of 6:22.81. Louisville touched in second with a time of 6:20.02, and moves up to sixth in the country for the year. Trevor Carroll led off for Louisville with the 6th fastest time in the country this year in the 200 freestyle of 1:33.99. That time will lock him into the NCAA Championships in March. Virginia Tech finsihed third at 6:21.48, Notre Dame was fourth at 6:21.51, and North Carolina was fifth at 6:22.7 for the final “A” cut of the session.

NC State swam lights out despite being seeded lower in the psych sheet. Like I said earlier and in this post and the fan guide, they are one of the teams that hasn’t had as many opportunites to rest or put up big times this year. Relay seeds do not mean too much, it is all about who shows up. Today, NC State showed up. They earned 18 more points than anyone else in the field, despite sitting in 9th place overall with diving scores added in. Below is scoring with and without diving after day 1.

VT is definitely under estimated and under appreciated.