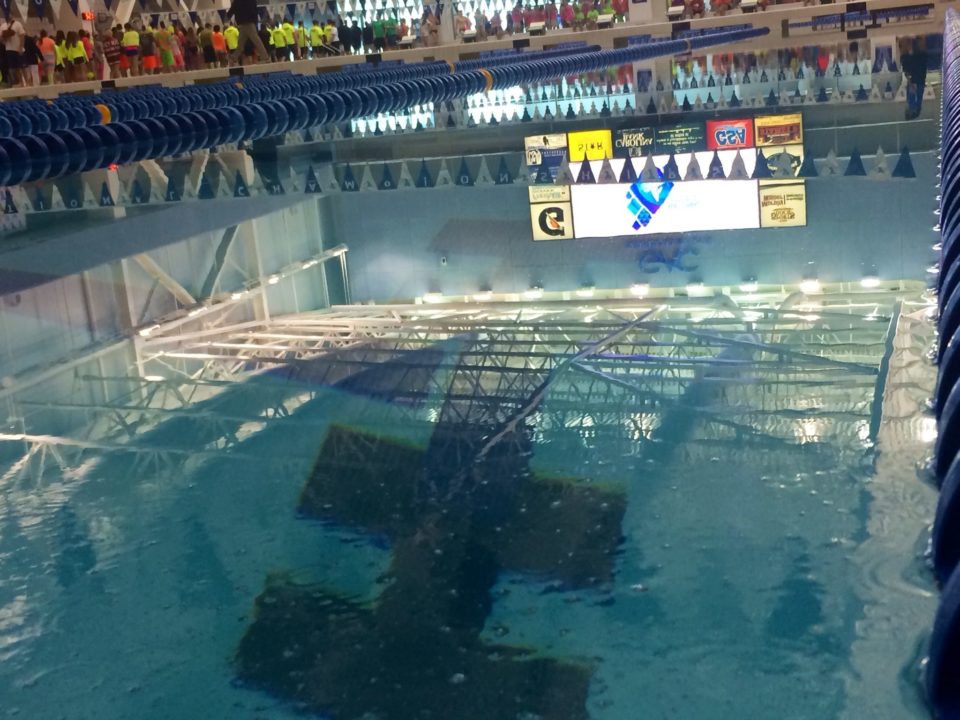 The first day of the 2014 YMCA National Championships saw a handful of Meet Records go down, and saw the Wilton boys and the Middle Tyger girls jump out to early leads in the team scoring.

Day 2 should see the record run continue, especially given that Emily Slabe started the day off with one in the 100 back in prelims.

To see our meet preview, plus all of the links to follow the action including video and live results, click here.
Day 1 finals recap, including top 10 team scores, available here.

Countyside’s Emily Slabe held onto her top seed in Wednesday night’s opening event, but things got a lot closer at night than they were in prelims. Slabe, a UNC signee, went 53.48, just two tenths off her YMCA National record from the morning. Meanwhile 4-seed Meghan Small of York YMCA dropped eight tenths to move up and challenge Slabe, taking second in 53.68. Small made a big back-half charge, but Slabe’s early speed was too much to overcome.

15-year-old Ashlyn Schoof of Schroeder took third, going 54.06, and Cape Cod’s Marie Chamberlain was fourth in 54.24. Second seed Katrina Konopka went 54.24 for fifth, and all three of those girls dropped time from prelims.

Beyond them, there was an entertaining battle for the B final win, with 15-year-old Camryn Forbes going 54.96 to just nip Caroline Baldwin by .01.

Nick Petersen of Schroeder YMCA in Wisconsin had another good finals swim, winning his second event of the meet. The 18-year-old Northwestern commit went 47.88, blowing away both his prelims swim and his seed time to win the event by over a second.

Middle Tyger’s Brad Oberg took second, going a 48.58 that was a big time drop for him as well, a half second faster than he went in the morning session.

Maximilian St. George and Daniel Hein battled it out for third, going into the 50 wall nearly tied. But St. George closed a tick faster to go 49.12 and nip Hein’s 49.25. In another great race, Brent Benedict touched out Sean Workman 49.41 to 49.48 for fifth place. The third-place battlers were both 16, while the fifth-place contenders were both 17 in simultaneous battles of age-group peers.

14-year-old Courtney Harnish continues to improve, dropping 3.3 seconds from her already-lifetime-best prelims swim to win the 400 IM. The York YMCA product went 4:11.93, thanks to some big front-half swimming. She split 55.5 on butterfly and 1:01.9 on backstroke on the way there. What’s scary is that Harnish can be much, much better in this event with some improvement to her 1:18.4 breaststroke leg.

Top seed Savanna Faulconer of Middle Tyger was a close second in 4:12.39. She fell behind Harnish early but clawed her way back into the race on breaststroke, splitting 1:09.5 there. She couldn’t match Harnish’s closing speed, but still went a lifetime-best by two seconds, and she’s only 15.

Also notable was Marah Pugh, who dropped four seconds from her prelims time to win the B final at 4:19.47, the fifth-fastest overall.

It was a Wilton 1-2 in the boys 400 IM, with a pair of teammates and future Big Ten foes sweeping the top two spots. Top seed Maxwell Dolan went 3:46.81 to just eke out a win over his teammate Ian Rainey by .01. Dolan, a future Wisconsin Badger, led on butterfly, by Rainey, who has signed on with Michigan, charged back to take the lead with a big 55.8 backstroke split. Things stayed pretty even split-wise through breaststroke, but Dolans’ 52.1 freestyle split was enough to take home the win and shatter the old meet record set by Mike Alexandrov over 10 years ago.

Ohio high school star Grant House made an appearance in the event, taking 5th wiht a 3:56.27.

Wilton won both of the top two heats, as Stephen Holmquist took home the consolation final in 3:54.03.

Future NC State sprinter Ryan Held showed some endurance, jumping up to second place for Springfield YMCA. Held went 1:36.85, dropping two-and-a-half seconds from his prelims time, which was itself a lifetime-best. That kind of swim coupled with his 19.58 in the 50 free last night means Held is becoming a more and more valuable relay pickup for the Wolfpack with every meet.

Middle Tyger put the punctuation mark on what’s been a great early-meet run for the girls by breaking the meet record in the 400 medley relay. The team of Ali Galyer, Savanna Faulconer, Jessi Snover and Katrina Konopka went 3:39.34 to take 1.2 seconds off the national mark set by York last season. Galyer led off in 54.21 swimming backstroke, Faulconer went 1:03.0 on breast, Snover went 53.3 on the butterfly leg and Konopka came home in a quick 48.7 for Middle Tyger.

Schroeder took second, going 3:41.25, just a half-second off the national record themselves. Ashlyn Schoof led off in 54.31, and Alexandra Meyers was 49.0 anchoring.

Somerset Valley YMCA won the boys relay event, going a 3:18.94 that easily topped the field but couldn’t quite break the team’s own national record from last year. Brad Zdroik went 48.8 on backstroke, Zack Warner 53.4 on breast, Joseph Delbuono 50.4 swimming fly, and Jason Tan was 46.1 on the anchor leg.

Lakeland Hills took second at 3:21.65 for second place, thanks in large part to a very-fast 48.9 from butterflyer John Om.

Just three tenths behind them were the boys from Triangle Area. Noah Franz anchored in 45.2 to bring the team in at 3:21.91.

After day 2, the Wilton Y boys and the Middle Tyger girls maintain their points leads. Middle Tyger leads York by 64 on the girls side, while Wilton sits 66 up on Triangle area for boys.

47.66 for Nick Petersen I think? Great webcast and from what I hear, better air quality at the pool.

I think if you scored this meet by state, Jersey would be winning.