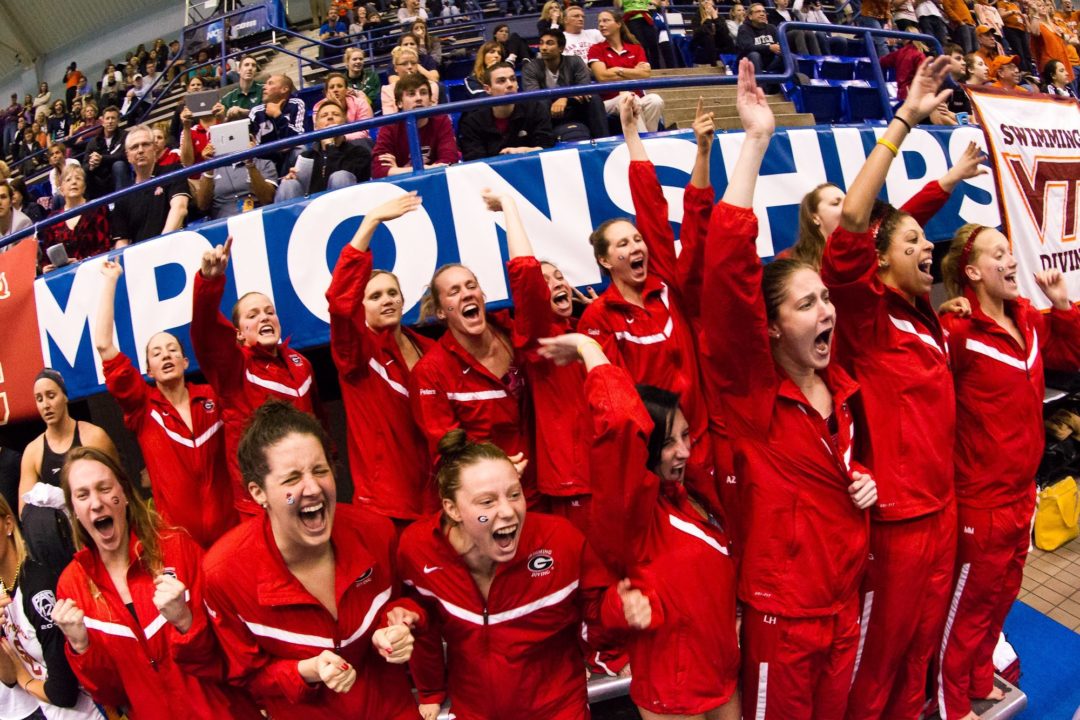 The very first event of the 2014 NCAA Championships will go a long way in telling who showed up to swim and who doesn't look ready for the bright lights and intense pressure of a national championship final. Look for top-seeded Georgia to set the tone early. Archive photo via Tim Binning/TheSwimPictures.com

The first event of the women’s NCAA Championships will be the 200 free relay, a collection of the all-out fastest swimmers on each team with the title of “sprint school of the year” on the line. Teams with an eye on the overall NCAA trophy will also be looking at the opening relay as a chance to build some momentum, hoping the early speed carries them through the rest of the meet.

Georgia’s got to see this as a great way to open up their defense of an NCAA team title. Though the pre-season hype was pretty Cal-centric, this Georgia team has reloaded in a big way and look like a deep enough team to repeat as title-winners. The 200 free relay will be the Bulldogs’ first chance to make a statement swim, and they look like the odds-on favorites already.

At SECs, Georgia went 1:27.09, which stands as the fastest time in the NCAA by .7. It’s also faster than Tennessee went in winning the event a year ago.

The Bulldogs were second in 2013. They graduated All-American anchor Megan Romano from that relay, a major loss – but they replaced her with fab freshman Olivia Smoliga, about as good a trade-off as you can hope for when graduating a swimmer of Romano’s caliber. Smoliga currently ranks #1 in the nation in the open 50, and if she can match her season-best leading off this relay, they’ll have a great shot to break 1:27. Maddie Locus, Jessica Graber and Chantal Van Landeghem all swam this relay a year ago, and they have a chance to be the rare group to put up straight 21-second splits.

Another team with that potential is Texas A&M. The Aggies were 1:28.02 back in November, and at least some of their relay should have some rest saved for NCAAs. Erica Dittmer has been 21.9 in the open 50 and seems like a good bet to lead off. Lili Ibanez split 21.5 in November. Meanwhile Sammie Bosma and Breeja Larson were each 22.0s on that relay and didn’t appear to fully rest for SECs last month either.

Stanford is going to place high in this relay, but right now they appear perhaps one swimmer short of straight 21s. The Cardinal actually beat A&M in that November battle at the Art Adamson Invite and hold the third seed coming in. Maddy Schaefer is one of the best sprinters in the field. Felicia Lee and Lia Neal are major threats on their legs. All three should be 21s, perhaps all 21-lows. But the fourth leg has to be a bit of a question mark. Alex Whitford swam it last year, but was only 22.4. She also failed to break 23 at Pac-12s and was replaced on the relay by breaststroker Katie Olsen. Olsen was also 22.4, respectable for a breaststroke specialist, but Stanford will need much faster if they want to stay in the hunt enough to give their big guns a run-down shot at the end.

Arizona comes in with the second seed. At Pac-12s, with the relay coming at the end of the session, the Wildcats used Bonnie Brandon as a leadoff, but at NCAAs, the relay leads things off. Will Zona be willing to use the sophomore stud just one event before her 500 free? Smart money says no, especially considering her 500 is much more impressive than her split (22.5) was at Pac-12s. Though Arizona has defending 50 free champ Margo Geer and two pretty solid legs in Alana Pazevic and Gracie Finnegan, they’ll need to fill that final slot to have a shot at running with this field.

USC’s got a pretty well-rounded relay, with Kasey Carlson likely batting leadoff and her teammates all capable of 21-second splits. The question with USC is 21-whats: a bunch of 21.9s will place them well, but probably not in the top two or three.

Of course Cal is a factor – the biggest challenge for coach Teri McKeever continues to be putting the right swimmers together on the right day. The Bears have got so many impressive relay pieces, they often wind up seeing their fastest splits coming from “B” and “C” relays. Missy Franklin is certainly an option here, though the double with the 500 free might be a con. Then again, Franklin is tough as nails, and her star power is electric, even in a race that’s not her forte. Her charisma could help set the tone for the Bears, who have been rather hit-or-miss this semester as a whole. Cal’s fastest relay this year featured none of their individual 50 freestylers (Farida Osman, Rachael Acker and Kaylin Bing swam the B that night in favor of Franklin, Liz Pelton, Cindy Tran and Rachel Bootsma) so there’s really no telling who will end up behind the blocks come Thursday night.

Tennessee won this relay a year ago, but graduated their two best legs. Expect the Vols to come back down to earth some this year, although Faith Johnson and Lindsay Gendron can still fly.

Auburn’s women aren’t quite as renowned for sprinting as their men, but the Tigers are still ranked 8th in the NCAA with some wiggle room. NC State is a rising team to watch as well, and Texas swam pretty well unchallenged at Big 12s – they should be quite a bit faster when pushed.

In addition, Florida was 8th in this event last year and didn’t graduate anybody off the relay. They were much faster as SECs last year, but if they’ve ironed out their NCAA jitters (three of the four legs were freshman in 2013) they should be very real factors.

One more thing to remember about the 200 free relay is the value of clean water. In what’s probably the most turbulent pool of any collegiate race, a team that roars to an early lead can benefit from the smooth water out front while opponents struggle through the chop in the thick of the pack. With that in mind, teams like Wisconsin or San Diego State could make surprise runs based on their quick lead-off swimmers Ivy Martin and Anika Apostalon.

Darkhorse: SMU. Finished 11th last year in what was a relatively disappointing NCAA showing compared to their entry time. But the squad should have a little more idea what the moment will be like this year. In addition to no one graduating off the relay, the team also added Marne Erasmus mid-season who should be an instant upgrade.

Anybody else think Georgia might make a run at the NCAA record? I would love to see that. I was actually surprised looking at the psyche sheet and see A&M ranked high. Never thought I’d see the day their 200 free relay would be better than their 200 medley relay.

Thank you. I find it interesting that NCAA has division three nationals only on their website.

Will there be a live stream available anywhere?