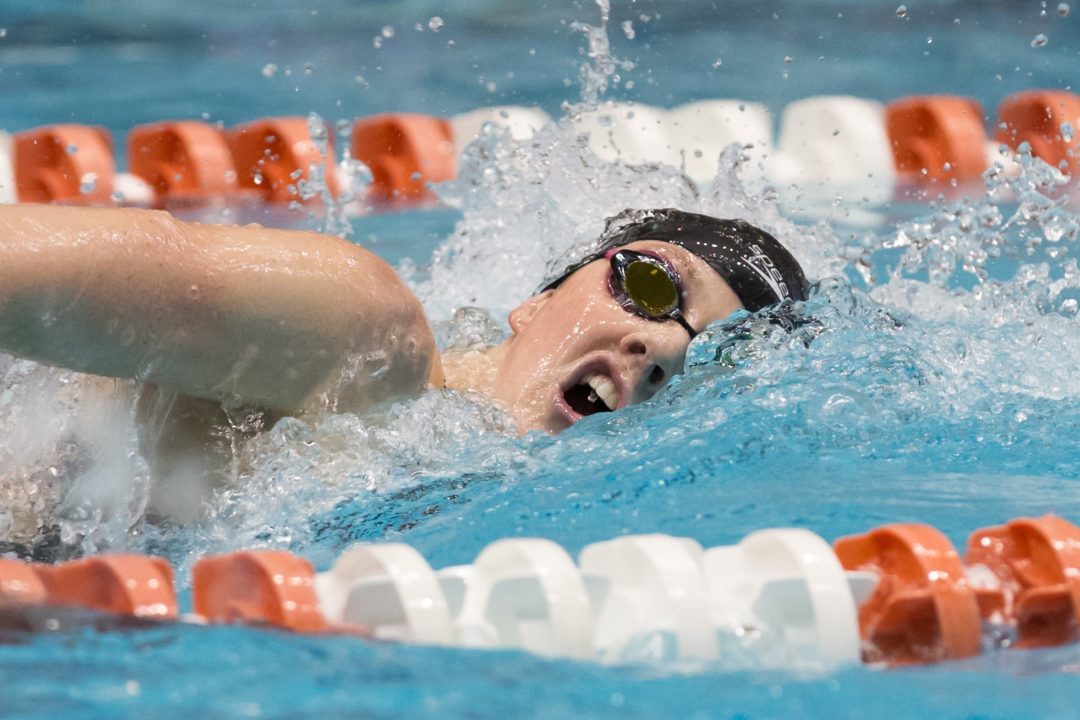 Three of the top contenders will look to star freshmen to power their programs to the top of the podium at the final event of the NCAA Championships. Archive photo via Tim Binning/TheSwimPictures.com

As the meet winds to a close Saturday night, the very last event could come down to some of the youngest swimmers in the pool. Three of the top seeds feature a big-name freshman, and each of those freshmen manned the anchor leg of their team’s relay during its fastest swim this year.

In terms of name recognition, no one’s going to match Cal’s Missy Franklin. The Olympic and World Champ is among the best all-around swimmers in the world right now, and she’s also potentially the fastest 100 freestyler in this meet (the open 100 runs a few events earlier Saturday night, which should settle that question). She’s a sure thing on this relay; who joins her behind the blocks is still somewhat up in the air. Cal’s once again got a ton of relay options, and it’ll come down to picking the right ones. With this event coming at the end of the meet, though, the Golden Bear coaching staff should have a pretty good idea who’s hot and who’s not. Rachael Acker seems like a solid choice as she’s nearly been 47 in the open 100 already this year. Egyptian national Farida Osman and junior Kaylin Bing are sprint-freestyle-oriented options, while Caroline Piehl, Liz Pelton and Rachel Bootsma could all be options from other disciplines. No matter which way you slice it, this Cal relay will be fast, and with Franklin presumably on the end, they’ll never truly be out of the hunt until the clock stops.

Georgia’s the defending NCAA champs. As in the other free relays, the Bulldogs graduated some big splits: Megan Romano and Allison Schmitt were the bruising back half of the 2013 relay. But Georgia has reloaded. Maddie Locus has had a huge year and risen to elite sprinting levels, going 47.90 from a flat start at SECs. And of course, Georgia has its own stud freshman, Olivia Smoliga. Where Franklin is a world-class middle-distance swimmer who can also sprint, Smoliga might be the best out there in pure speed. She holds the top 50 time in the nation as well as a top-5 mark in the 100. With Shannon Vreeland and Chantal Van Landeghem returning from last year’s championship relay, Georgia probably has the most solid bunch of any team here – there are no weak links on this Bulldog chain.

When talking about big-time freshman sprinters, don’t forget about Lia Neal. Stanford fans feel they’ve got the best of the bunch, and for good reason. Neal went 47.48 all the way back in November, a time that still sits fourth in the nation in the open 100 this year. With a full taper, could she be more dangerous than even Franklin or Smoliga? Only time will tell. Neal is backed up by upperclassman sprinting sensation Maddie Schaefer as well as all-around stars Felicia Lee and Maya DiRado. This is another scary foursome that might be able to fly under the radar and sneak past the field if the Cal-Georgia team points battle gets heated Saturday night.

Arizona has a handful of high-quality swimmers, and you feel like this might be the event where they all line up the best. The Wildcats biggest problem is that their two next-level studs specialize differently enough that they have trouble showing off their full talents together in the same relay. Margo Geer was the fastest woman in college swimming last year and is certainly in the hunt to repeat that feat in 2014. Meanwhile Bonnie Brandon is a beast over a distance and an incredible 200 backstroker. This relay comes more in Geer’s area of expertise, but if Brandon can find a way to get up to speed quick enough, Zona has a dynamic duo to close the meet out with. It helps that the Wildcats have a pair of great relay sprinters in Alana Pazevic and Gracie Finnegan to round things out.

Despite graduating half of their relay from a year ago, Tennessee has been almost as fast in 2014. Faith Johnson and Lindsay Gendron are back with a vengeance after breakout seasons a year ago. Harper Bruens and Kate McNeilis have filled in the other two slots, and did so admirably at SECs. The senior McNeilis was 47.9 on her split – if those two can hold onto their tapers and press towards a pair of 47-second splits, this relay will be in good shape.

Florida looks like a crew with some time to drop. The Gators return their entire 6th-place relay from last season. Sinead Russell can easily top her SEC leadoff of 48.9, and you’d think Elizabeth Beisel will be especially ready to go in the final swim of her collegiate career. Natalie Hinds swam out of her mind at SECs with a 46.9, and she was also the fastest split on this relay at NCAAs last year. Then you’ve got Ellese Zalewski, who definitely appears to have saved some rest for the NCAA Championships.

Keep an eye on USC – they’ve got Kasey Carlson, who’s one of the fastest overall 100 freestylers around, as well as sophomore on the rise Kasia Wilk. They’ll plug in Kendyl Stewart and freshman Chelsea Chenault to form a solid squad with big-point potential.

Texas A&M put up their season-best back in November at their home Art Adamson Invite. That would suggest they probably have some more time to drop at NCAAs, but its hard to predict how much – that same foursome went only about a tenth slower at SECs. Lili Ibanez was 48.18 in her open 100 at SECs, and if she can go 47 leading this relay off, it’ll really set the tone for the rest of A&M’s squad.

There’s Texas, who won the five-team Big 12 field without much of a fight. That crew will face a much different situation in Minneapolis – more intensity in the atmosphere but less clean water in the pool. Expect the Longhorns to be faster this week. Out of the ACC, keep an eye out for UNC and NC State, who battled for the conference championship a few weeks ago and both have top-8 potential at nationals.

Top 8 picks with fastest times of the season:

The top of this event could go either way at this point. The big draw for Cal is the possibility of Missy Franklin doing Missy Franklin things. She’s quite possibly the best female swimmer on the planet right now; would anyone really be surprised if she popped off an otherworldly split to run down the field? Still, Georgia is probably the safer bet, because Cal’s fortunes depend greatly on who suits up for the relay and who sits.

Darkhorse: Florida State, 3:15.76. This team is built on sprinters, and huge splits from Tiffany Oliver and Kaitlyn Dressel could power the Seminoles to a big finish.

Smoliga seemed to struggle a little with multiple swims in one session at SEC champs and that was with their 5 day meet. As talented as she is I wouldn’t be surprised if she was running on fumes a little by this relay.

That’s a very tough combo, but then again, Beisel’s an awfully tough swimmer. And it’s what Florida seems to really gear up for with their high-volume training. I think with the platform diving break in there Saturday night, she’ll swim the relay. Hard to say how fast she’ll be, though.