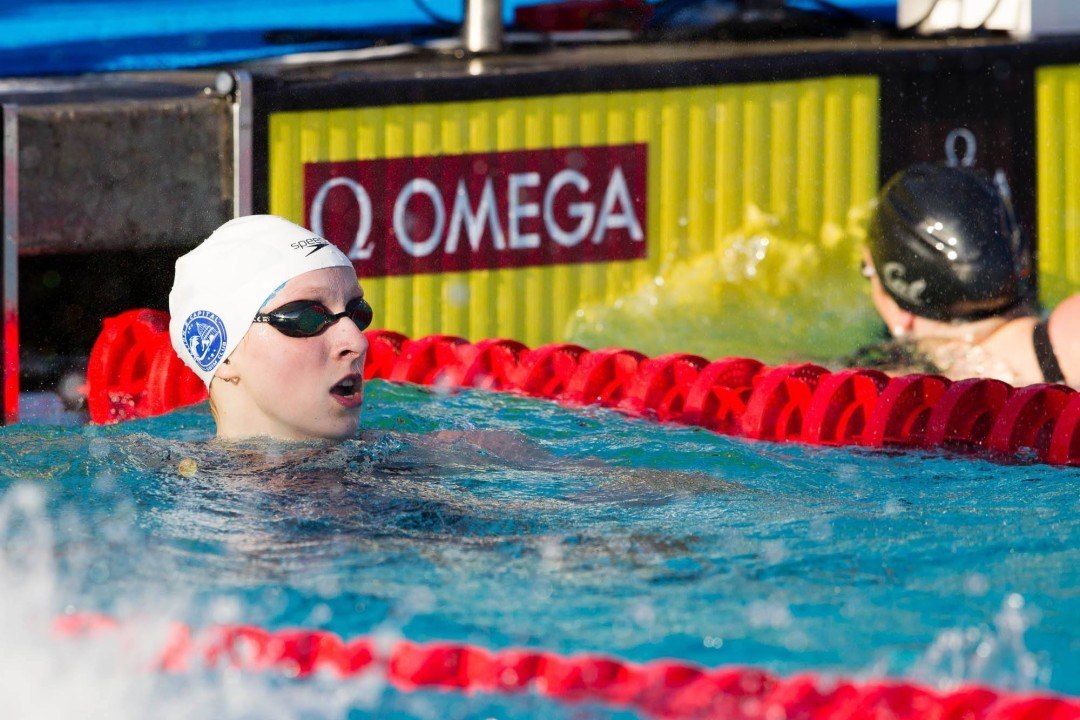 Follow along for live updates from prelims of day 4 of the US National Championships. Current photo via Tim Binning/TheSwimPictures.com

Day four of the US National Championships features the 400 freestyles, 100 breaststroke, and the 100 backstroke. For a full preview of day four prelims, click here.

Katie Ledecky continues to impress on day four the US National Championships with the fastest time of the morning in the women’s 400 freestyle. She was .07 seconds off her American record from World Championships last year, but she did knock out Katie Hoff’s US Open and Meet record with her time of 3:59.89. The previous US Open/Meet records were both set in 2008. The meet record was 4:02.32 and the US Open record was 4:02.20. That also improves her own junior world record. The previous Jr World Record was 4:03.84 from the Mesa Grand Prix.

Joining them in finals tonight will be Elizabeth Beisel, Becca Mann, Gillian Ryan, and Sarah Henry.

Sean Ryan, Reed Malone, and John Lewis will be joining them in finals tonight.

Micah Lawrence had the fastest time of the morning to earn the top seed in the women’s 100 breaststroke tonight. She finished with a time of 1:06.97. Jessica Hardy was second with her time of 1:07.23, followed by Breeja Larson at 1:07.39. Emma Reaney had the fourth fastest time at 1:07.47.

Lilly King had a breakout long course swim, dropping close to a second and a half to make the A-final tonight. She is the 15-16 NAG record holder (59.67) in the 100 yard breaststroke.

Joining them in finals will be Katie Meili, Molly Hannis, and Melanie Margalis.

Kevin Cordes was the only swimmer to break a minute this morning in the men’s 100 breaststroke. He touched the wall at 59.83. Brendan McHugh, the 50 breaststroke national champion, finished second with his time of 1:00.31. Cody Miller and Zach Hayden tied for the third seed this morning at 1:00.71.

Joining them in finals will be DJ Macdonald, Brad Craig, BJ Johnson, and Nic Fink.

Cheyenne Coffman, Kathleen Baker, Ali Deloof, and Clara Smiddy will be joining them in finals tonight.

Jacob Pebley and Nick Thoman finished fifth and sixth at 53.89 and 54.28. Thoman was a second behind the pack, but he looked very smooth through the entire swim. He won the silver medal at World Championships last year, so expect him to be a player tonight.

Joining him in finals tonight will be Eugene Godsoe and James Wells.

No one hates you, that was just an ignorant thing to say. They may not be living up to their expectations, but each of them has her own circumstances, and each clearly believes she has more left in the tank. Not living up to expectations for one meet is no reason to suggest retirement. Especially for Schmitt, who definitely has not reached her peak. You may believe in quitting while you’re on top, but none of these ladies has any obligation to retire until they feel their work is finished.

Some people may hate me but i believe on stopping at least professionally when you are not already living up your own expectations. When foreign athetles retire it is ok. It is not if it is a us swimmer? If someone like phelps were swimming 50 on 100 free would be something to celebrate? If cielo were swimmimg 23 24 on 50 free i would feel sorry for him

Winner gets to pick where they eat dinner tonight? 🙂

Hoff schmitt and coughlin made their mark but by the results we see they should retire. It is sad to see an athlete pride put them into this situation

Rafael before you say something as ludicrous as that, why don’t you look at all the info. Katie Hoff has a intercostal strain, which is a very painful muscle tear that has sharp bursts of pain whenever you move your arms. Allison Schmitt posted a 1:56 this season in the 200 free, which is a world class time, especially for someone who did not start training seriously until January. Couglin has been training only sprint free and has only swam one event so far this meet, how about you wait until she at least swims the 50 before you tell them to retire.

I disagree entirely. If they want to keep racing, they should keep racing. Period.

“Everyone who adds time or doesn’t make the top 16 for any reason should retire.”

That’s a shortsighted comment. Sure Coughlin for example may not be the swimmer she once was, but that doesn’t mean she could hang it up. She obviously loves the sport so why should she stop?

Good god. Just watched an interview of Allison Schmitt this afternoon where one of the reporters was just asking questions in the most insensitive, intrusive, horrid way. She literally said, “When you look at the times, like Katie going 3:59, is there a part of you that thinks, ‘No matter how hard I train, these young kids are just too much?'”

Allison handled it with 100 times more grace than I would have. I mean, I wanted to know what was up with her performance at this meet, but I can’t believe the way this reporter approached it. (Also, I would link to it, but I don’t know the etiquette for linking to other swimming news sites).

I saw the interview and I was a bit taken aback by those questions. Allison handled it much better that I would have in that situation and I loved the funny little dig she took at the reporter.
Not sure what is going on with her exactly but she will be back

In my experience living on the coast further south , it takes about a week to warup after a spell like that in winter. These are southerlies ( from the Antarctic) .it will depend if the northern warmer air displaces the chill .

I would definitely be in there trying for the top time tonight .Note there has never been even a state titles at Southport because of its inclement weather . ( I once went to a national diving comp in April that was beautiful one day & a hurricane… Read more »

Good lord Phelps’s splits… His second 50 was the same as Godsoe’s first, and just 3/10 slower than Thoman’s first 50. He could win this thing.

he could but i bet a Murphy or a Plummer won’t agree so easely ; i don’t even mention Grevers , the Olympic and World Championship ! with the 100 butterfly final , this is the most incredible final in a long while . He has a super chance to be fast tonight …….nontheless

Maybe he can pull out a faster front half in the evening, swim straight, have a decent start/turn, and come home like he did this morning. If he can do all those things he could dip below 53 and possibly win. Grevers had half a body on him at the start and a full body after the turn and then Phelps practically swam on top of the lane line and event then almost ran him down in the process.