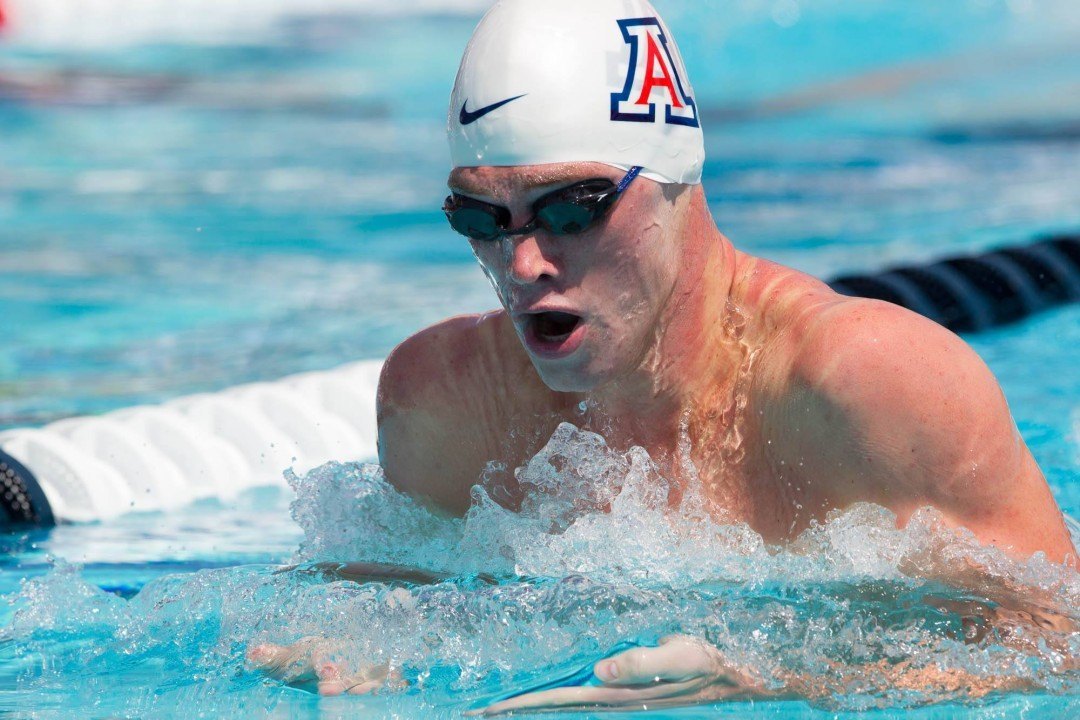 Of the 8 finalists, five of them have already qualified for the 2014 Pan Pac’s team. Katie Ledecky and Cierra Runge qualified from the 800 freestyle last night, while Missy Franklin, Shannon Vreeland, and Simone Manuel secured their spots during the 100 freestyle. Leah Smith, Chelsea Chenault, and Sarah Henry are the three with the most to gain in this final tonight, with roster spots on the line.

This race will be between Katie Ledecky and Missy Franklin. Although Ledecky ran away with it this morning, Missy Franklin should be much tougher tonight in the final. Shannon Vreeland shouldn’t have much of a problem finishing in third, which will make it a competition for the fourth and final Pan Pac’s roster spot in this event.

Conor Dwyer is the only A-finalist that has qualified for the 2014 Pan Pac team already. For everyone else, they will be fighting to secure their spots.

Matt McLean looked great this morning with the top qualifying time out of prelims. He was just off his best time. Conor Dwyer was close to two seconds off his best. This race should be Dwyer’s to win, but his training Matt McLean should put up a good fight.

Clay Youngquist is a very consistent swimmer all year round. He has done well in yards as well as meters, and he has a great shot at qualifying for Pan Pac’s tonight.

Michael Klueh made his first World Championship team in this event last summer. With such a young final, his experience may help guide him into the top four tonight.

Micah Lawrence looked great this morning during her prelim swim, she had the fastest time by two seconds in this event. Breeja Larson is seeded second. She has done very well over the past few years. Emma Reaney is in the mix tonight. Reaney had an incredible yards season, breaking the American record not once, but twice. She has yet to perform at the same level in meters, but tonight would be an opportunity to do so.

Will we see a new World Record tonight?? Kevin Cordes surprised a lot of people this morning, especially after cruising through his prelim swims and almost missing the A-finals during the Grand Prix’s. Nic Fink looked really good and had a good time as well. It will be fun to watch the two of them tonight.

Elizabeth Beisel has been having an incredible season, and that doesn’t appear to be changing any time soon. She had the fastest morning swim, ahead of the World Record holder Missy Franklin. Beisel will be fresh as this is her only swim tonight. Missy Franklin has the tough 200 free / 200 back double. In the past, Missy has never had a problem with doubles, but she was also training at altitude. Now that he is in Berkeley, it will be interesting to see how well she can manage the same double.

Tyler Clary, the 2012 Olympic Gold Medalist, will have to hold off the young guns tonight to maintain the top spot in the 200 backstroke. I think this is going to turn into a three man race between Clary, Ryan Murphy, and Ryan Lochte.

The 50’s will be interesting because they are not qualifying events for the 2014 Pan Pac Championships. They are, however, still  qualifying events for the 2015 World Championships. The winner of each non-olympic event will have a roster spot on the 2015 World Championship Team. Our understanding of the selection procedures is that non-olympic events will only be decided at Nationals and not at Pan Pacs. We have asked USA Swimming for clarification and will update as soon as we have an answer.

Women’s breaststroke has really changed as far as the age of finalists. It use to be that most of the female finalists were teenagers!

i think Franklin vs. Ledecky is the race to watch tonight 😀
and GOOOOOO Cordes…..

My predictions:
Cordes overthinks it and dies, but still wins. Fink in second.
Murphy, Lochte, Clary, in that order. Clary takes it out too ambitiously and fades hard the last 50, Murphy fast but controlled the whole way with pretty even splits, Lochte chugging along on sheer heart for silver.
Missy over Ledecky by a hair. The simplest prediction, but also the one I feel least sure of.

Agree with most of your predictions. I see you have even taken what I wrote about Missy, the tough doubles and the altitude. 🙂 Women’s 200 free If Missy doesn’t calculate and swims at 100% without keeping energy for the 200 back, she will probably win. Katie is stronger than ever. She has the speed this week. It will be a close race. Anyway, whether it is Missy or Katie, we know it will be a great battle. Shannon Vreeland for the third place. And Cierra Runge for the 4th place. Hopefully Allison Schmitt will swim a decent time in the B-Final. But will she have the fire to do it? She knows she’s probably out of the US team… Read more »