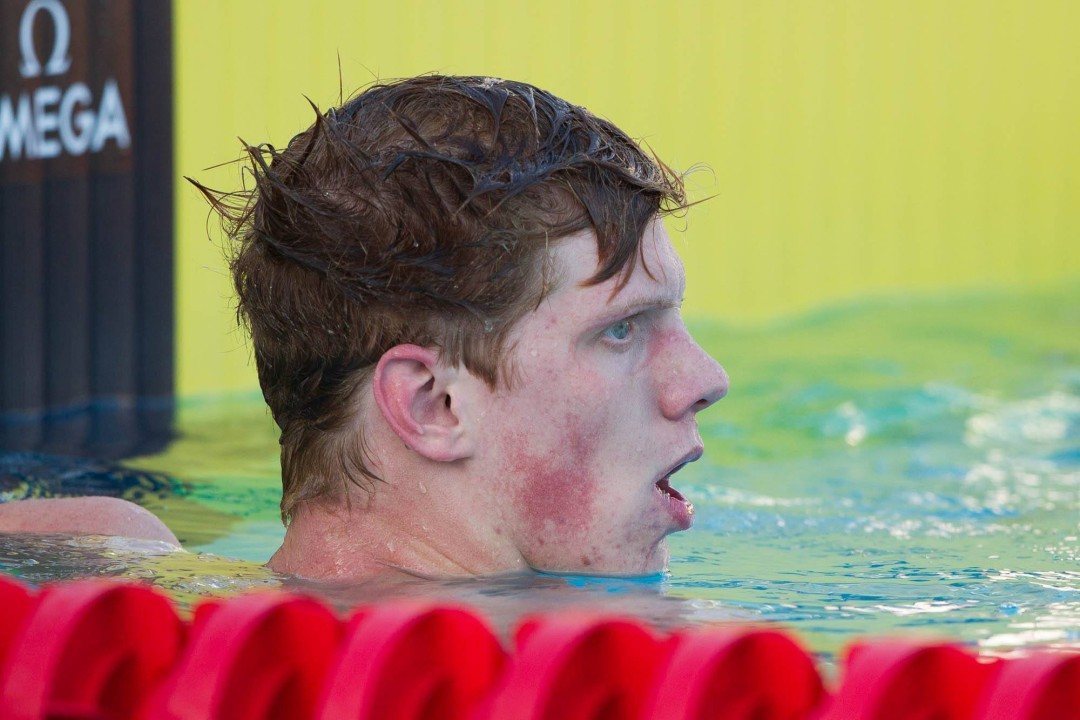 Townley Haas won his third event of nationals, overcoming a tough Maxime Rooney for the 200 free win in 1:48.75. Meanwhile Amy Bilquist survived a scare to take her second title, and could take three for herself by tomorrow night. Current photo via Tim Binning/TheSwimPictures.com

Junior Nationals are down to their penultimate night in Irvine, with 7 exciting events lined up. The headliner of the morning was Pleasanton’s Maxime Rooney, who pulled a big 100 back/200 free double and still went 1:49.70, dropping four-plus seconds from his lifetime best in the second of those races. Tonight, the race order switches, with the 100 back last and the 200 free first. Theoretically, that should keep Rooney even fresher for a big battle with second seed Michael Domagala and 100/400 free champ Townley Haas.

Tonight also features the 200 breast, where 14-year-old Emma Cain takes the spotlight on the girls side after meet record-holder Allie Szekely was disqualified this morning. On the boys side, Ross Palazzo is the top seed, though many fans will still be watching 14-year-old Reece Whitley, the top seed coming into the meet who was a bit off his best this morning. Whitley will look to lower his own 13-14 National Age Group (NAG) record tonight – it currently stands at 2:16.48.

In the girls 100 back, Amy Bilquist will go for her second win for Carmel – she paced the 100 free earlier in the meet and is also the top seed in tomorrow’s 50. The meet will end with the girls 4×200 free relay after the Indiana University team crushed the boys meet and 15-18 NAG record in the event last night.

16-year-old Stanzi Moseley picked up the first national title of the night, getting just under two minutes after flirting with that barrier this morning. Moseley, our of Roadrunner Aquatics in California, went 1:59.88, her lifetime-best and first time sub-two minutes.

Moseley went out fast, as she’s known for, hitting the pad at 57.35 to her feet at the 100 turn. She dropped off some in the back half, but held off top challenger Taylor Ruck down the stretch. Ruck outsplit Moseley by over a second on the last 50, but the Roadrunner had built too big a lead to be overome. Ruck wound up at 2:00.14, still an awfully good time for the 14-year-old from Scottsdale (Arizona).

Pleasanton’s Erika Brown went out with Moseley at the start, blasting a 57.7 on the opening 50 to sit second. She fell victim to Ruck’s last-lap charge, but still wound up third overall at 2:00.29.

Area Tallahassee’s CeCe Williams won the B final, going 2:01.12. Williams, an incoming freshman with the Virginia Cavaliers, was a second and a half faster than prelims, cracking her lifetime-best in the event by 1.4.

Things looked a little sketchy for Townley Haas this morning in pursuit of his third title of these Juniors, as Maxime Rooney had the breakout swim of the day and Haas slid to the third seed a day after just missing a best time in the 400. But Haas erased any doubts tonight, blasting away over the final 100 meters to claim the 200 crown in 1:48.75. That’s just a tenth off the meet record set by Caeleb Dressel in last summer’s B final.

Rooney had a great swim himself, cutting two more tenths off what was an outstanding morning swim to go 1:49.54. Rooney led at the 100-mark by a couple tenths, but Haas really stepped on the gas in the back-half as Rooney’s speed tapered off ever-so-slightly. A ways removed from those two was Walker Higgins of Tennessee Aquatics, who went 1:50.68.

There was another good-sized dropoff after that to Dayton Raiders’ Brock Turner, who will compete in California for the Stanford Cardinal next season. Turner was 1:51.15 for fourth.

In the B final, Patrick Mulcare held 9th place, going 1:51.10 to beat the field by .7. That’s well over a second faster than Mulcare was in this morning’s preliminaries.

Future Michigan Wolverine breaststroker Emily Kopas was the big winner in the girls 200, knocking off 14-year-old Brit Emma Cain by a little more than half a second for the title. Kopas went 2:29.53, a new lifetime-best for her by two seconds. Cain held onto second easily, going 2:30.25, dropping a tenth from what she was this morning in taking the top seed.

Miranda Tucker had a huge night swim for Livonia Community Center of Michigan. Narrowly squeaking into the final with the 8th seed, Tucker blew past half the field to go 2:31.81 for third place overall, bridging a large gap between Kopas and Cain and the rest of the field. That’s a lifetime-best for Tucker by 1..5 seconds.

Y-Spartaquatics’ Savanna Faulconer put up almost exactly the same time as she did this morning, going 2:32.47 for fourth. Faulconer was 2:32.49 in prelims. Defending Junior National champ Maija Roses was 2:32.49 for fifth. A testament to how fast this year’s meet has been? Roses’ winning time from last year would have gotten her only fourth this season.

Katie Drabot went 2:33.61 for 6th, the last legal finisher as the DQs kept coming. This morning, the officials got meet record-holder Allie Szekely, and tonight they called both #2 seed Emma Schanz and #4 seed Tatum Wade, taking them out of the running in the final.

The boys 200 breast went to second-seeded Todd Owen of Louisville. Owen, a Louisville native who competes for the University of Louisville’s club team and is signed on to attend the school next year, went 2:16.25. Owen has had a huge improvement curve after picking up year-round swimming relatively late. He’s a former football player (think Josh Schneider with breaststroker knees) who held a lifetime-best of 2:23 before this summer. He’s blown that time away multiple times this season, and caps it all of with a national championship.

Matthew Anderson of the Arizona Marlins went 2:16.71 for second place, taking another half-second off his lifetime-best. He had already cut a second earlier today in the preliminaries. 14-year-old phenom Reece Whitley went 2:16.81, just missing his own National Age Group record of 2:16.48 set earlier this summer. That time still garnered Whitley third-place honors.

Top seed Ross Palazzo wound up fourth, gaining a second and a half from prelims to go 2:17.63. Joseph Portillo of SwimAtlanta and Ethan Browne of Excel battled for fifth, with Portillo topping Browne 2:18.16 to 2:18.23. Tommy Brewer was 2:20.15 for seventh, and incoming Stanford freshman Curtis Ogren was a victim of yet another DQ out of the final heat.

Daniel Chang won the B final for the Barracuda Swim Club of Tennessee, just beating Canyons’ Peter Kropp 2:18.71 to 2:18.79.

Just two events after watching Townley Haas complete his triple crown, Carmel’s Amy Bilquist took the next step in earning hers. The Indiana 16-year-old went 1:01.04 to win the 100 back in touchout over her own teammate. Fellow 16-year-old Claire Adams was 1:01.12, just a hair behind Bilquist. Those are lifetime-bests for both girls in a 1-2 finish for Carmel, which has had a strong presence at Juniors so far.

Always the subject of much discussion among fans, 15-year-old Michael Andrew gave them something to talk about tonight. The versatile Indie Swimming machine won his first-ever Junior National title, going 55.73 to beat a tough 100 back field.

That’s a lifetime-best for Andrew, just a few tenths of Vlad Morozov‘s meet record, and puts him within two seconds of the 15-16 NAG set by Ryan Murphy with over a year and a half left in this age bracket. Andrew has always impressed with his versatility, but what’s unique about him that every month his “future focus” event seems to change as he breaks out in a different stroke or distance.

Top seed Michael Taylor of Dynamo took second. Taylor once again added a bit after a huge prelims swim, but the 15-year-old still went a very-fast 56.07 to put a pair of 15-year-olds on top of the Junior National podium.

Badger’s Patrick Conaton, the 200 back winner, went 56.68 for third place. Perhaps unexpectedly, Conaton was out about as fast as the flyin’ 15-year-olds, but fell off in the back 50 to take bronze. Just behind him was Roadrunner’s Brock Bonetti, at 56.74.

Patrick Mulcare out of Oregon took 5th, just touching out Cheyenne Mountain’s Daniel Carr 56.93 to 56.97. Carr is 15 as well, part of a 15-16 age group that has really impressed at these championships.

Joey Reilman (57.04) and Thomas Anderson (58.00) rounded out the A final, with a fast 56.58 from David Puczkowski winning the consol heat just prior. In that consol heat, Maxime Rooney tied for 11th, pulling a double with the 200 free. Rooney was 57.70 tonight, just a half-second off what he went this morning when the 100 back came before his 200 free.

That managed to beat the red-hot Carmel, Indiana team that has so dominated these championships so far. Carmel was 8:15.56, getting a 2:02.29 as their fastest split from all-everything star Amy Bilquist on the anchor leg. Joining her on the relay were Veronica Burchill (2:05.23 leading off), Emma Nordin (2:04.14) and Claire Adams (2:03.90).

The two swam in different heats, with NBAC essentially chasing Carmel’s splits, and the final scoreboard showed that they had done it successfully.

Palo Alto took third in 8:16.51, bookended by a big 2:02.81 leadoff from Jennifer Campbell and a 2:02.16 from future Stanford Cardinal Ally Howe on the end. They swam in the final heat with NBAC, and also in that heat was fourth-place Davis Arden Racing Team, which went 8:19.32.

Why has jacob molacek’s performance level dropped so much?

GOAL – solid chance he’s saving his full taper/shave for Nationals next week. We’ll know more based on how he performs there.

he also came down with food poisoning the night before 100 breast, so that is most likely still affecting him