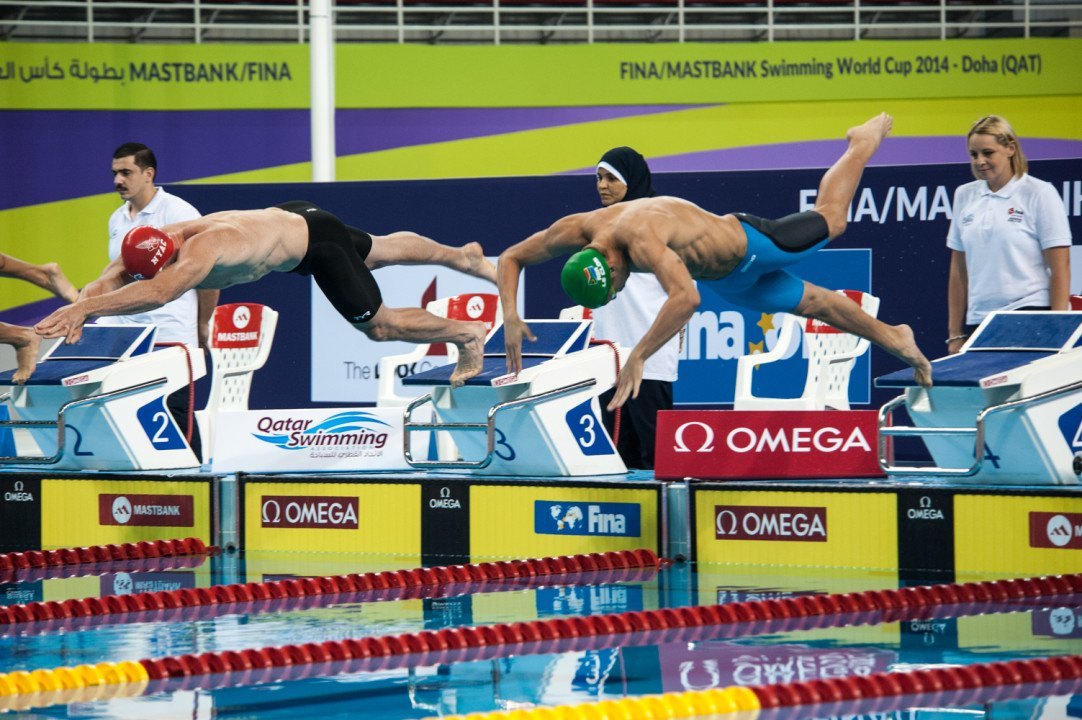 Chad le Clos came just short of a world record in the mens' 100 fly, crushing his own national record with a 48.70. Current photo via FINA Mastbank World Cup - Doha

Mitch Bowmile and Braden Keith contributed to this report.

We’re onto the final session of Doha’s World Cup, and prelims has set up the usual suspects for another big payday. Defending series points champion Katinka Hosszu punctuated a four-event morning with a world record in the 100 IM. Hosszu is looking at a very sprint-based lineup tonight, with the 100 free, 100 IM, 100 back and 50 fly, an interesting event schedule for a woman who typically rules the middle distances. She’ll also add the 400 IM and 200 fly, two timed final events that are more up her traditional alley.

Meanwhile men’s points winner Chad le Clos is starting his series with a lighter load, and has just the 100 fly tonight. That does mean the South African should be fresh, though, and it’ll be interesting to see what he can do in one of his best races after missing the Pan Pacific Championships.

Ous Mellouli was about a second behind Stjepanovic to round out the top three with a 14:51.87. David Verraszto of Hungary was fourth.

Katinka Hosszu made it a double world record day, doubling down on her world mark in the shortest IM distance this morning to take out the longest IM distance at night. Hosszu was 4:20.83, sneaking just .02 under her own world record in the short course 400 IM and winning easily. That’s another $1500 for the win, plus her third $10,000 world record bonus, meaning Hosszu can probably afford a meal out at a fancy restaurant when her exhausting evening finally wraps up.

Second place was Spain’s Mireia Belmonte Garcia at 4:25.85. What makes Hosszu’s swim so impressive is that Belmonte is an outstanding swimmer herself, probably one of the four or five best female swimmers at this meet, and Hosszu still rolled to a blowout win. Behind those two was American Caitlin Leverenz, who went 4:29.59 for bronze after taking silver in the 200 IM.

Last night’s 50 free winner Inge Dekker stayed hot with a win in the 100 as well. Dekker lost her biggest competitor when Hosszu scratched the race (she didn’t have the 400 IM right before it in prelims, and went 53.05), but the Dutch sprinter was still clearly the fastest woman here, going 52.61 for the win.

Australia’s Marieke D’Cruz was 53.18, just a tick off what Hosszu was in prelims, and bronze went to Lena Kreundl of Austria at 53.93.

Just a tenth behind was Pawel Korzeniowski out of Poland. His 1:44.16 snuck out bronze over Russia’s Aleksandr Krasnykh (1:44.26).

Jamaica’s Alia Atkinson defended her 100 breast title from a day ago, going 29.12 to win the women’s 50 breast. Atkinson, a former Olympian and World Cup staple, was a good seven tenths better than her nearest challenger, American Breeja Larson. Larson was back at 29.87, and that pair were the only two swimmers under 30.

Iceland’s Hrafnhildur Luthersdottir took bronze in 30.67, building on her third-place finish in the 100 last night.

The 200 breast happens later this session in a timed final, so Atkinson will likely have a shot to sweep the breaststrokes in Doha.

Daniel Gyurta grabbed another win for Hungary as he took down Cody Miller of the United States with a 57.04 in the 100m breaststroke. Miller was behind him in 57.25 followed by German breaststroke star Marco Koch who got his hand on the wall in 57.59.

As expected, this race was much faster than prelims, but it’s impressive that Miller, an American who just graduated college this spring, was able to put up such a strong fight against Gyurta, one of the most renowned breaststrokers in Europe.

Tom Shields and Chad Le Clos battled it out again here in Doha, both competing in the 100m fly, but ultimately it was Le Clos who touched the wall first in 48.70. Le Clos won the 50 last night over Shields. Shields finished second here as well in 49.23.

That time for Le Clos missed the world record by just over two tenths, a narrow margin by which to miss a $10,000 payday. That time does stand as a new South African record, though, and is the third-fastest ever swum in the event. Shields was just about four tenths over his own national record in this event after setting the American 200 fly mark yesterday.

Poland’s Konrad Czerniak was a ways back at 50.55 to pick up bronze over Germany’s Steffen Deibler (50.74).

Ho-hum, another swim, another win for Katinka Hosszu. After setting a European record with her 55.38 in prelims of the 100 back, Hosszu returned to go 56.06 for the easy event title. Coming off of the 400 IM tonight instead of the 100 free this morning, Hosszu was considerably more fatigued, but was still the fastest woman in the pool by 1.8 seconds. She was just seven one-hundredths off the old European record, meaning she nearly put up the two fastest swims in European history in the same day.

Second went to Daryna Zevina of the Ukraine at 57.80, and third-place prize money went to Colombia’s Carolina Colorado at 58.60. In an event that really dropped off in depth, Sanja Jovanovic from Croatia was the only other woman under a minute.

It was Eugene Godsoe who picked up the first American win of the day, going 23.22 to win the 50 back. Godsoe beat out Australia’s Bobby Hurley for the win by just a couple tenths.

The race for silver was incredible, as Hurley nipped Christian Diener by a single hundredth, 23.51 to 23.52, relegating the German to bronze medal status. Fourth went to Spain’s Miguel Ortiz at 23.67 before the rest of the field trailed off to the 24s.

The 400 IM wasn’t close, but Mireia Belmonte Garcia still found a way to rain on the Katinka Hosszu parade on day 2. Belmonte beat out Hosszu for the 200 fly win by a solid 1-second margin.

Belmonte was 2:03.39, running third at the 100-mark but accelerating past the leaders, Hosszu and Germany’s Franziska Hentke, over the back half to pull out the win. Hosszu wound up 2:04.48 for second, just barely beating Hentke’s 2:04.55. Fourth went to American Caitlin Leverenz back at 2:07.27.

It wasn’t clear early that this race would go the Aussie’s way. Marco Koch and Cody Miller, both of whom are outstanding breaststrokers, sat in the lead after the butterfly, and Fraser-Holmes only gave himself a little margin over Koch after the backstroke leg.

Koch, though, looked much better in finals on his breaststroke leg than he did in prelims, and woudn up half-a-second ahead going into the last lap of this race. Fraser-Holmes was not daunted by the gap, however, and almost immediately pulled back into the lead.

He wound up pulling by Koch and winning by his own half-a-second, with his German opponent placing 2nd in 1:54.45.
Miller stayed in this race with the fastest breaststroke split of the field, and took 3rd in 1:55.45. Hungary’s David Verraszto was 4th in 1:55.74, and the top seed in prelims Jakub Maly of Austria placed 5th in 1:56.87.

Things continue to roll for Mireia Belmonte Garcia, as she won her second straight title with the women’s 400 free. The Spanish machine crushed a 4:00.91 that beat the field by a wide margin, giving her a $3,000 paycheck just from two events over less than a half hour.

Second was Julia Hassler out of tiny Liechtenstein. Hassler was 4:06.04, and was as far ahead of third place as Belmonte was ahead of her. Daryna Zevina of the Ukraine was 4:12.04 to take the third-place prize money.

American Josh Schneider picked up his first career World Cup win, going a 21.07 to win the men’s 50 free by a relatively comfortable margin.

He beat out a tie between Poland’s Konrad Czerniak and George Bovell in 21.43 for 2nd place.

Of peculiar note, though in the real world it’s not all that significant, the top four finishers all had matching .68 reaction times coming off the blocks.

With just four women in the 200 breast, competition was quite spread out, and three of the four came back with prize money. American Breeja Larson picked up the win after a runner-up finish in the 200 earlier today. Her 2:20.71 won by three seconds over Iceland’s Hrafnhildur Luthersdottir.

Luthersdottir was 2:23.70 for second, followed by the second American, Laura Sogar. Sogar was 2:25.90 to pick up the final prize money amount. The final swimmer was Michee Van Rooyen out of South Africa, who went 2:45.82.

Swimming in her fourth event of the day, Katinka Hosszu got her third win. Her 57.34 was a tenth off the world record she set during prelims, but still won easily over Aleksanra Urbanczyk.

Urbanczyk, of Poland, was 59.46, and third went to Caitlin Leverenz of the U.S., who managed to earn money in all three IMs this week. Leverenz was 59.75, beating Austria’s Lisa Zaiser for bronze.

Germany’s Christian Diener picked up the 200 back win with a 1:50.20 in the timed final event. Diener led wire-to-wire in a dominant performance.

Winner of two races yesterday, Dutch sprinter Inge Dekker matched that total today, winning the women’s 50 fly with a 25.27. Dekker beat Australia’s Marieke D’Cruz for the win, with D’Cruz coming in at 25.64.

Third, and quite a ways back, was Katinka Hosszu, finishing a very full day with a 26.38 and the final paycheck of the meet. Hosszu was far behind the leaders but well ahead of fourth-place Carolina Colorado of Colombia.

Austria came down with the final mixed relay, going 1:34.47 to beat out three other nations. The Austrians led off with Martin Spitzer and continued the relay with Lena Kreundl, Gottfried Eisenberger and Lisa Zaiser. Spitzer’s 22.20 was the best lead-off leg, and Zaiser’s 25.03 was the best women’s leg of the field.

World Record for Katinka in the 400 IM, narrowly breaking her old record, 4:20.83. That is all three of the IM world record all in one stop of the series.

I half-wish Hosszu would focus exclusively on the 100 back tonight. She already has the IM WRs, but she put a real scare into the 100 back this morning. That would be great for her.

FINA reports:
Before her third participation in this circuit, her statistics were already impressive: 71 gold medals and six World Records. In terms of victories, only two athletes in the history of the World Cup had done better: Martina Moravcova (SVK), with 105 successes, and Therese Alshammar (SWE) with 93 triumphs. At Hosszu’s rhythm, these two landmarks in the history of the competition could soon be improved. After the first day in Doha, Hosszu has 75 wins and the 2014 edition has just started!