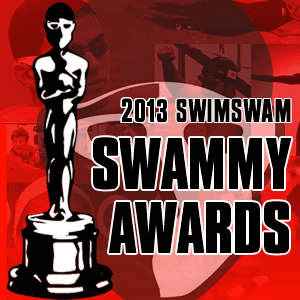 There was a lot of fast swimming from the 11 to 12 year-old set in 2013, including several national age group records.

Grace Ariola had a huge 2013, ending the year with 16 top-ten swims for 11-12 girls, including six number one times. Four of those number ones (100 free, 50/100/200 back) were in long-course meters, which is all the more remarkable considering she aged up just before the summer. No other 11-12 girl was able to topple her times from the middle of May until the end of August. The other two first-place swims were the 200y free and 400y IM.

A Very Special Honorable Mention goes out to this year’s NAG record-breakers.

Chip, along with stats on your ingorance history could you please post where you get your information from? keep in mind that while you’re spouting ignorant comments with zero knowledge and attempting to UNglorify the accomplishments of a hard working and motivated young swimmer, smart and responsible coaches are coaching regan (notice its not reagan-he was a president-but if you did your research you would know that) to reach HER goals.

Along with the stats for all of these kids, could you also post how long each of them have been swimming with their respective Senior Programs? Reagan Smith has been since she was 9 or 10. Keep that in mind while you’re glorifying the irresponsible coaches that train these KIDS like small adults.

Chip Stevens – no, we cannot do that. It would be impossible, and silly.

Speaking of irresponsible adults…consider that you’re an adult taking shots at 13 year olds.

Alsader swam in a junior squad with same coach since he was 8, and Ariola in a novice squad at 8 then transitioned into the same junior squad at 9, the junior squad consists of 13 and unders, just moved them to an elite senior squad this fall as 13 yr olds going into HS in 2014, they only swam 5 days a week as a 10&u and as an early 11 yr old, then moved to 6 days a week. Focus was on technique ALWAYS, while building aerobic base from 11-13 and some twists on race pace training added into workouts as 12-13 yr old. Nothing crazy aerobically or yardage wise while 12&unders. Goal of season plans were always… Read more »

Chip – That’s an incredibly ignorant and irresponsible comment. Your assertion about Regan Smith is 100% incorrect. ZERO truth whatsoever. Out of respect for SwimSwam, I’ll stop at that.

Fantastic 11/12 talents to watch this year.
With probably many NAG records to fall.

On the girls’ side, the 2 best backstrokers Regan Smith (future big big star) and Nicole Oliva will battle each other to break the records.

On the boys’ side, Carson Foster will attack the fly records. Ethan Dang will destroy the breaststroke records. Vinny Marciano could break the backstroke records.
And last but not least, my new darling of the age group swimmers, Destin Lasco, who has an amazing technique and who could break several records before turning 13.