2013 Duel in the Pool Set for Glasgow, Scotland in December 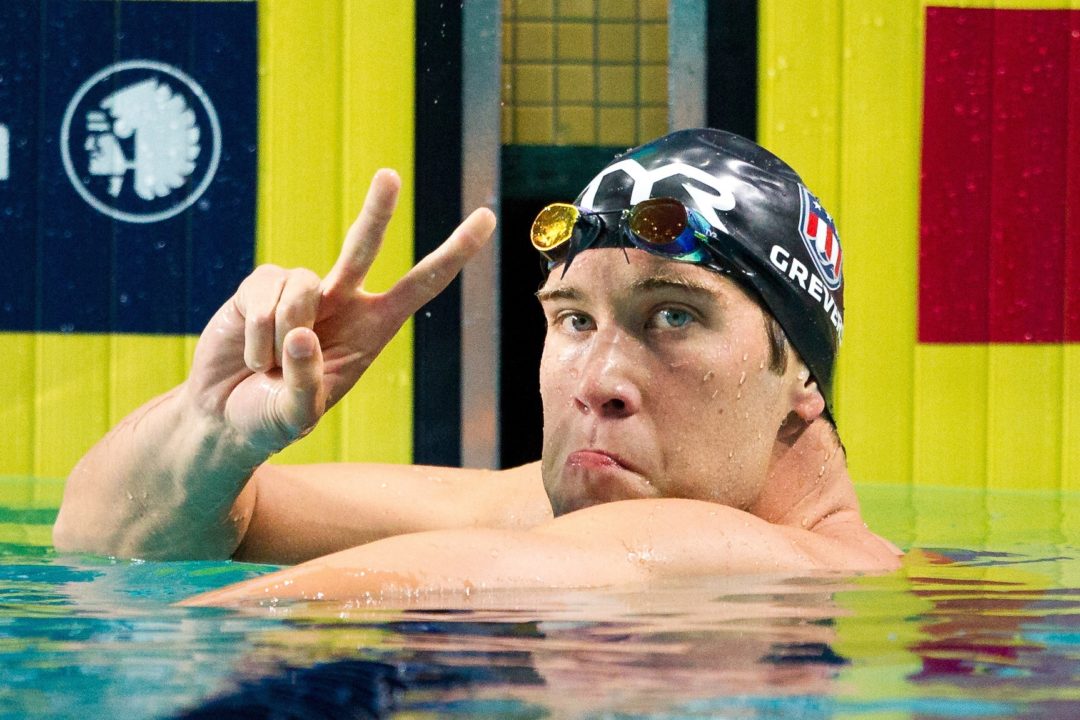 Matt Grevers led an American 1-2-3 with Nick Thoman and Ryan Lochte at the 2011 edition of the Duel in the Pool in 2011. photo via Tim Binning/TheSwimPictures.com

Different European federations, including the Brits, the Italians, and even the Americans, have confirmed the scheduling of the 2013 edition of the Duel in the Pool competition, which is to be hosted in Glasgow, Scotland on December 20th and 21st in preparation for the 2014 Commonwealth Games.

In 2009, the meet first switched to a U.S. – versus – Europe challenge with great success: it was the last major global meet before the outright worldwide ban of the polyurethane suits in 2009, resulting in 8 broken World Records. That was despite little interest from the European side in the initial meet.

The 2011 version of the meet, held in Atlanta, returned some excitement to the event, with an extremely high-profile American and European roster, including names like Lotte Friis, Laszlo Cseh, Ranomi Kromowidjojo, Rikke Moller Pedersen, Daniel Gyurta, and Vlad Morozov.

The Americans have never lost this meet, winning all 5 versions they’ve been involved in:

*in 2009, the Americans and Australians continued their own series of this meet, but no longer against each other.

The American roster will be selected by choosing the top swimmer in each Olympic event from the World University Games, the World Championships, and the U.S. Open, the second-best 100 and 200 freestyler, and leaving all other selections up to the National Team Director Frank Busch and the Head Coach (still unnamed). Note that USA Swimming has to fill many lanes, so swimmers are likely to be in several events outside of their primary.

The American roster will be announced by November 1, 2013 at 10 AM Mountain Time. The team can include up to 22 men and 22 women. See the full selection criteria here.

While Short Course Meters meets can be used for NCAA qualifying, and the Short Course World Championships now being recognized as an acceptable qualifying meet, it is not clear if the NCAA has decided on this newly-announced event yet. We have asked for clarification. It is, however, after most collegiate swimmers have finished their semester, so it’s possible that USA Swimming will have collegiate athletes to choose from in addition to their pros and high school swimmers.

Remember that this is the meet in 2011 where the American 400 medley relay broke the World Record. Of course, the Europeans, no matter how fast they are, can’t break the World Record – and they have the potential for some really good relays. Based on the results of the 2013 long course World Championships, a true all-star European roster would have the advantage in every leg except for the backstroke.

Let’s hope for a rather better showing from Europe this time around!

With the help of a few French and Danish swimmers, it could be interesting. 🙂

Are France sending a decent contingent to Denmark? Last year they were awesome in Chartres (as you’d expect at a home competition) then hardly bothered with the SC worlds. Any idea if they are taking Euro SC champs seriously this time?

Absolutely no news about the team to Herning.
The French championships are the week before the European championships.
I think Muffat is taking the end of the year slowly to refresh a little her body and her mind.
Agnel is in USA so I would be surprised to see him in France in December.
Probably Manaudou and Stravius will be there.
I expect a decent contingent. Not a strong contingent but a decent contingent.

Excellent, totally getting tickets for this! 😀

I remember when the Duel in the Pool pitted the Aussies v. the Americans. . .