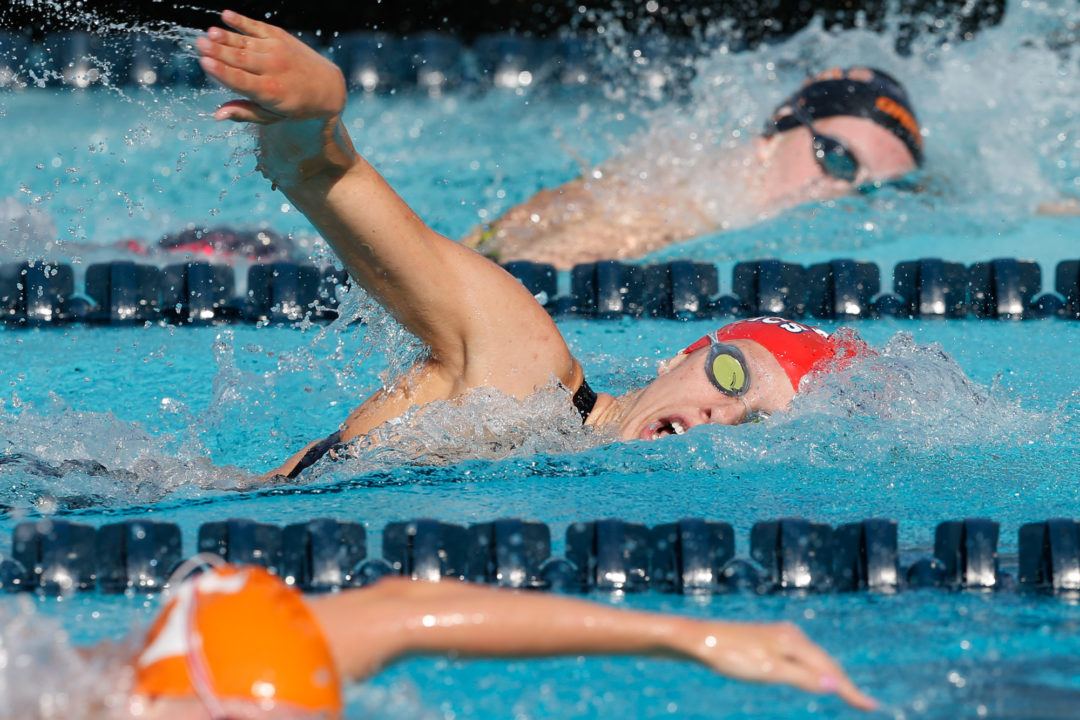 Samantha Pearson (the #18 recruit in the US) will become the third highly-ranked Stanford prospect to defer her freshman year amid the coronavirus pandemic. Archive photo via Tim Binning/TheSwimPictures.com

Samantha Pearson (the #18 recruit in the country) will become the third highly-ranked Stanford prospect to defer her freshman year amid the coronavirus pandemic.

Pearson checked in at #18 in our rank of the top NCAA swimming prospects in the United States this past spring. The butterflyer and freestyler would have been a freshman for Stanford this fall as part of the #1-ranked recruiting class in the nation.

But the program has confirmed that Pearson will be taking a gap year and deferring her Stanford enrollment to the fall of 2021.

That continues to thin what was an elite Stanford recruiting class. #1 overall recruit (and arguably one of the top prospects of all-time) Regan Smith announced her deferred enrollment back in July. Then #6 Lillie Nordmann announced in August that she, too, will be deferring her Stanford career until the fall of 2021.

Pearson starred for Foothill High School in Santa Ana, California and swam for Socal Aquatics Association. She’s got high-level butterfly and freestyle times that would have contributed to Stanford’s stellar roster right away. But with another year to develop, Pearson could be a massive scorer as a freshman next year.

Stanford’s current roster for the 2020-2021 season shows the sophomore, junior, and senior classes, but doesn’t yet list the freshmen. Barring any other deferrals, the Cardinal would add #15 recruit Janelle Rudolph (another sprint freestyler with comparable times to Pearson) and IMer Isabel Gormley, who was an honorable mention just outside of our top 20 recruits.

Any word on Taylor Ruck’s 2021 status?
I wonder if athletes have heard the writing on the wall that Stanford’s 2020-21 season will be truncated.

I very much doubt if she’s at Stanford this year. As it stands now, there is a strict two-week quarantine for getting back into the country, which would mean being out of the water for two weeks before Canadian Trials.

The wheels have really fallen off the bus at Stanford. They look ready to follow the ASU plan.