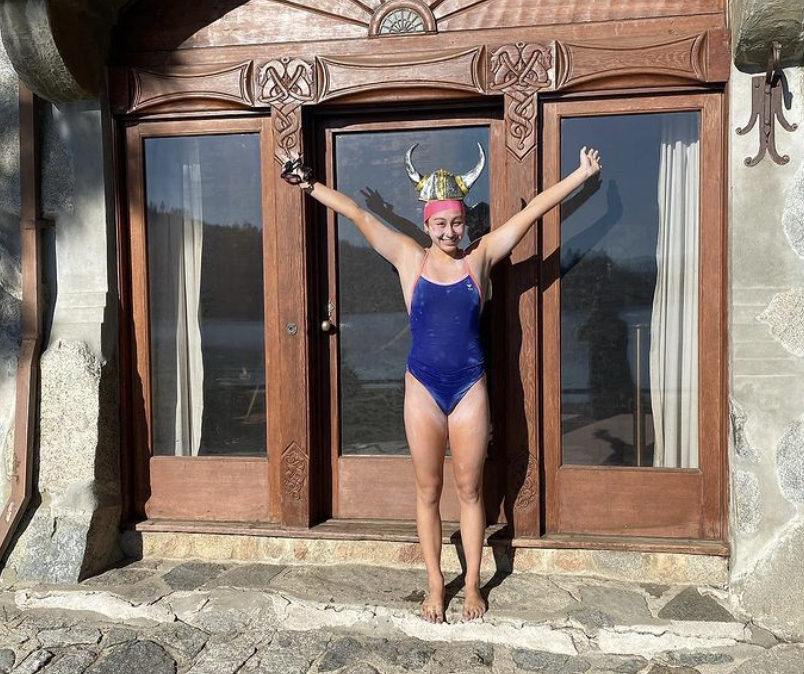 Sophia Bell completed the Vikingsholm crossing in Lake Tahoe on Monday morning, finishing the 10.6-mile swim in an unofficial 4:27.17. Current photo via via North Bay Aquatics

Sophia Bell completed the Vikingsholm crossing in Lake Tahoe on Monday morning, finishing the 10.6-mile swim in an unofficial 4:27.17. If the time stands, it will make the 17-year-old UCSD commit the fastest woman by nearly 50 minutes and less than seven minutes shy of the overall record held by Jorge Angel (4:20.32 from August of 2020).

The Vikingsholm crossing is the shortest of three swims that comprise the Tahoe Triple Crown. The swim starts at Cave Rock in Nevada and ends at Emerald Bay on the California side of Lake Tahoe. Competitors are not permitted to wear wet suits and are not allowed to touch the boat. Food and water must be thrown to the swimmer.

Bell began her crossing in the dark at 3:34 a.m. with her dad, Scott, kayaking right by her side. The first few items tossed to her had glow sticks attached so that she could find them easily.

“I ran into my dad’s kayak once, but other than that I had a pretty steady line,” said Bell, who trains with North Bay Aquatics in Marin County. “The no-touch rule was also not a problem. My dad kayaked next to me with glow sticks attached. Although, I did have to yell at him a couple times because he kept leaving my side and going ahead. During the whole swim I had no sense of where I was. A lot of it was quite a blur.”

Bell also had help from her North Bay Aquatics teammate Alessia Root and her father, Stephen, who each swam with her for an hour during her trek. The water temperature ranged from 68 to 70 degrees. As Bell approached Emerald Bay, the finish line proved to be just as deceiving as advertised.

“The toughest part of the race was Emerald Bay,” Bell recalled. “It is known among open water swimmers that Emerald Bay is an optical illusion. Lots of people start sprinting when they see the rock but I was told prior to my race that from the entrance to the beach it takes about 40 minutes. I felt like I was going nowhere and kept yelling at my dad, ‘10 minutes?!’ It was such a relief when I got on the beach.

“I was surprised that I was able to find my balance and run to the door,” she added. “I wasn’t out of breath tired when I finished but my body was clearly aching. My shoulders hurt the most the day after. Swimming for 4.5 hours didn’t stop my mom from asking for a jumping picture.”

The potentially record-setting feat is even more impressive considering it was her first marathon swim, though she did win the Escape from Alcatraz race last September.

Bell began training in the San Francisco Bay during the pandemic when most pools closed down.  At first, she was scared of not seeing the bottom, as well as the possibility of running into a creature out in the water. Now she goes out weekly with a group of Masters swimmers every Thursday at South End Rowing Club just across the Golden Gate Bridge. Bell has grown attached to the exhilarating health benefits from cold water exposure, the unpredictability of open water conditions, and the camaraderie at her South End Rowing Club.

“I have conversations weekly with random people in the locker room planning on their next big swim, whether it be a casual six-hour training swim in the bay or the English Channel,” Bell said. “A lot of ‘South Enders’ are seniors, making it even more impressive.”

“I also love how conditions can be unpredictable,” she added. “Bay days are harder when temps get down to 50 or lower but they definitely test my grit.”

Heading to UC San Diego in the fall. Love to see it

probably so she didn’t get run over by a speedboat. lots of careless boat renters on lake tahoe in the summer.

Starting as early as possible is best for dodging boat traffic and having calmer water throughout the entire swim. At least that’s what I’ve heard, I’m just a pool swimmer.

The water in the lake can get a little choppy as the morning goes on.

The early start is mainly for two reasons…. Wind and boat traffic…. Especially into Emerald Bay. It gets pretty dicey at the opening with so many boats.

and: At first, she was scared of not seeing the bottom, as well as the possibility of running into a creature out in the water

I’ve run into something out there, in the fog, never been the same since!