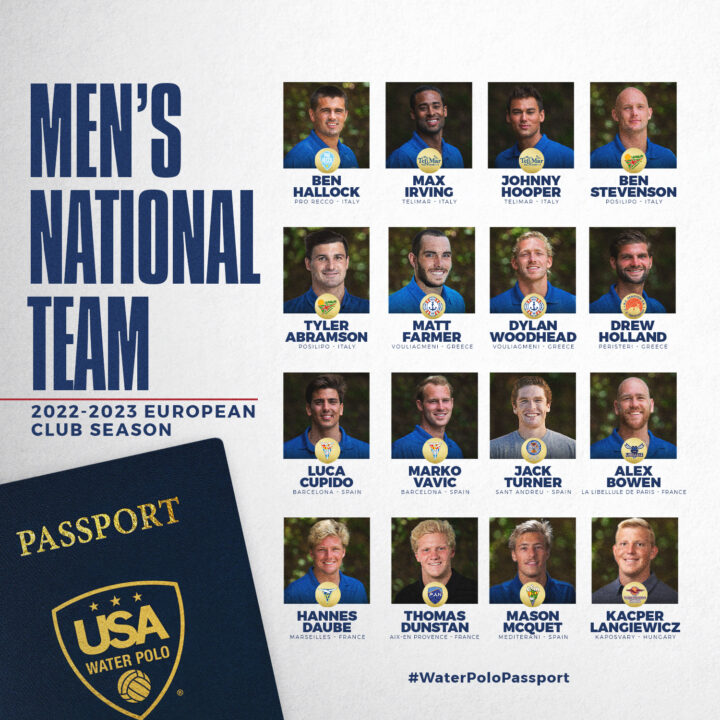 After 11 did so last year, 16 U.S. National Team members will compete in the 2022-23 European club season. Current photo via USA Water Polo

Irvine, CA – September 12 – The USA Men’s National Team will wield a major presence on the European club scene yet again this upcoming season. One year after 11 members of the Men’s National Team capped up for some of the top clubs abroad, a variety of countries have welcomed 16 Team USA athletes for the 2022-23 season. Some athletes have been competing for their clubs for multiple years while others make the move to a new club this year. The international water polo landscape features a host of athletes with experience at the USA Water Polo and NCAA levels; here’s a closer look at current members of the Team USA pipeline.

Twelve members of the men’s roster from the 2022 FINA World Championship are competing abroad, including Ben Hallock who stays with Pro Recco in Italy for a third-straight season after back-to-back Champions League titles and Max Irving who also stays in Italy with Telimar. Ben Stevenson moves from Olympic Nice in France to CN Posillipo in Italy where he will join returning lefty Tyler Abramson.

Top goal scorer at the 2022 FINA World Championship Alex Bowen makes the move from Partizan in Serbia to CN Noisy Le Sec in France. Marko Vavic also departs Partizan after one season for Barcelona. Hannes Daube joins Marseilles in France while Drew Holland will move within Greece to man the cage for Peristeri after spending last season with Chios. Two others will cap up in Greece with Vouliagmeni, including Dylan Woodhead and Matt Farmer, who moves over from Peristeri. Thomas Dunstan rounds out the World Championship roster returnees as he will head to France to play for Aix-en-Provence.

Other National Team athletes are also back in Europe. Tokyo Olympians Johnny Hooper and Luca Cupido will join the fray overseas with Hooper teaming up with Irving in Italy at Telimar and Cupido joining Vavic in Spain at Barcelona. Kacper Langiewicz continues to be a mainstay in Hungary returning for another season with Kaposvary. Jack Turner will continue to patrol the cage for CN Mataro, which he also did last year. Mason McQuet, a newcomer to the Senior National Team training roster, will also travel to Spain to play for Mediterrani.

“The positive impact of having our athletes play in Europe is noticed every time our USA team meets for practice or competition. It’s great to see so many guys go abroad this season playing for some of the top clubs in the game. We remain confident this approach will bring good results in the future and I’m excited to see what our guys do this year,” said Dejan Udovicic, USA Men’s National Team Head Coach.

Stay up to date with all the action in Europe by visiting USAWaterPolo.org where a weekly club round-up sharing scores and highlights will be posted every Monday afternoon when teams are in competition.