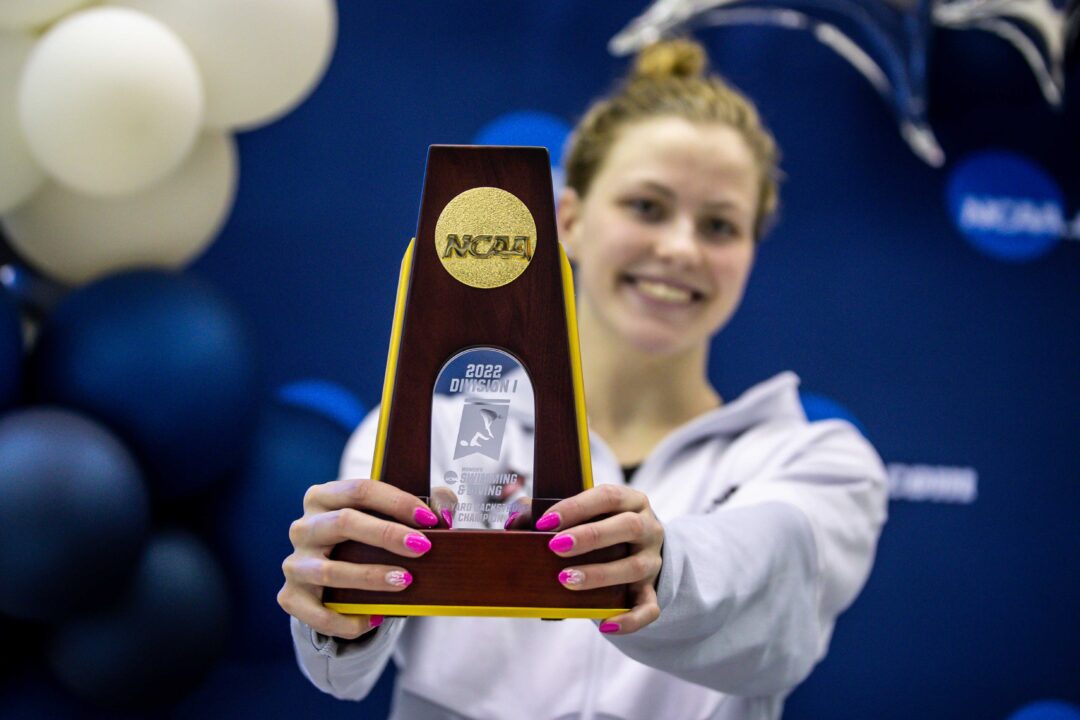 Katharine Berkoff will once again be a driving force for the NC State women as they aim to move up from their fifth-place finish at the 2022 NCAAs. Archive photo via Jack Spitser/Spitser Photography

The team moved down from second to fifth at NCAAs this past season, but it isn’t even that they performed “bad” it is more that they had to compete against teams (such as Texas and Stanford) who had swimmers come back from deferrals and redshirt years amidst the pandemic.

The Wolfpack actually had an impressive showing, especially at ACCs, scoring 30 more points than they did in 2021, and went from being over 150 points behind Virginia at the 2021 ACC Championships to less than 75 in 2022.

Katharine Berkoff had a huge season that was highlighted by her American Record of 48.74 in the women’s 100 backstroke, done en route to winning a second consecutive NCAA title.

Berkoff and Kylee Alons placed seventh and eighth, respectively, in the 50 free. Berkoff swam a best time and Alons was less than two-tenths off of hers, showing they continue to trend in the right direction.

The two also scored in the 100 free, as Berkoff was third and Alons was 12th. Alons went a best time in the event at NCAAs, whereas Berkoff was just off her best which she swam a month prior at ACCs.

Rising junior Abbey Webb competed in both the 50 and 100 free individually at NCAAs, and rising senior Heather MacCausland was also in the 50.

Joining the sprint free group will be Katherine Helms, Cassie Moses, and Meghan Donald, who have already been 22-mid in the 50 and sub-50 in the 100, which is a promising sign for NC State’s prospect pool.

The 200 free is where the team struggles in this section, as the team had no finalists at NCAAs. Rising sophomore Annabel Crush was slightly off her seed time at NCAAs, finishing 36th. A best time wouldn’t have quite gotten her into the top 16, but further improvement in her second season will put her in the hunt.

The 500 and 1650 freestyles were some of the only events in which the team scored zero points at NCAAs.

The incoming freshmen aren’t super flashy to help strengthen this weakness as the only true distance freestyler coming in is Emma Hastings who has already been 4:45.4 in the 500 and 16:25 in the 1650. Both times would not have made 2022 NCAAs, but with a little improvement, especially in the 500, Hastings could possibly qualify individually.

It is pretty obvious who leads the backstroke group here as Katharine Berkoff won the 100 back at NCAAs in March setting a new American Record in the process. Even though she didn’t swim the 200 back at NCAAs this past season, her 20 points alone in the 100 already are huge for the team.

In addition to Berkoff, Emma Muzzy also scored in the 100 back at NCAAs, swimming a 51.72 for 13th. That was a personal best for the senior. Muzzy is one of four NC State fifth-years on the roster for this upcoming season.

As previously mentioned, Berkoff didn’t swim the 200 back at NCAAs, but Muzzy was an ‘A’ finalist in the event, placing seventh. They do lose Kate Moore, who was a scorer last year as a fifth-year.

Although the loss of Moore will sting slightly, the good news is the team has #6 ranked recruit Kennedy Noble coming in. Noble holds best times of 51.51 and 1:51.91 both of which already would have scored this past season. Also joining the backstroke group will be Moses and Donald. Both already go 53.5 in the 100 back.

The loss of Sophie Hansson will sting big time here, but that will be alleviated to an extent due to the fact that Andrea Podmanikova is returning for a fifth year. Although not at the same level as Hansson, who was one of the fastest in the country, Podmanikova will be significant for the team, particularly in the 100 as she owns a PB of 57.90 from last season’s ACCs. She was about a second off of that at NCAAs, but if she swam that exact time in prelims at NCAAs, she would have made the ‘A’ final.

Podmanikova also swam the 200 at NCAAs but was about two and a half seconds off her seed time to finish 31st. Notably, both her seed time (season best) and lifetime best would have also made the ‘A’ final.

Hitting their seed times for Maccausland and Podmanikova will be very key for the team as that could add double-digit points.

Joining the breaststroke group will be incoming freshman Aubree Brouwer, who already goes 59.37 in the 100 and a 2:10.58 in the 200. Notably, her 100 best time is less than a tenth off of already scoring in the ‘B’ final, a rarity for an incoming freshman.

The butterfly group at NC State is small but mighty. Kylee Alons returning for a fifth year, which is massive for the team considering she was fifth in the 100 fly at NCAAs last season.

Also joining the sprint fly group will be fifth-year transfer Sarah Watson. Watson arrives from Akron and qualified for the 2022 NCAAs individually, and was a finalist in the 100 fly back in 2021.

Rising junior Abby Arens is another member of the 100 fly group with the potential to score, having hit a best of 51.62 at ACCs that would’ve been top-16 at nationals.

The team’s only individual swimmer in the 200 fly at NCAAs last season was Grace Sheble, who earned a second swim and placed 16th. Sheble was half a second off her personal best time set in high school, so she has room to grow and could challenge for a future spot in the top eight.

Joining the fly group will be 53-mid flyers Brouwer, Moses, and Grace Monahan. All are in the 53-mid vicinity, with 52.35 the requirement to earn an NCAA invite last season.

Interestingly, the 200 IM was the team’s largest scoring event at ACCs, but the Wolfpack failed to score any points in either individual medley event at NCAAs.

The main reason they had no finalists in the 200 IM was that both Julia Poole and Kate Moore (who have since graduated) both added from seed—they would’ve been in the ‘B’ final had they been at their season-best.

Although they lose the highest two finishers in the 200 IM from NCAAs, rising sophomores Grace Sheble, Annabel Crush and rising junior Abby Arens are still around.

Sheble also has the potential to make a huge impact in the 400 IM at NCAAs as her seed time would have been ninth in prelims. She finished 22nd.

Although the team only has two stars here, there’s potential for more if everyone is on point at NCAAs.

The diving events were the three lowest scoring events for the team at ACCs, and the team sent no individual qualifiers to NCAAs. Based on our tracker, no huge diving recruits are coming in which may leave this as a gap for another year.

The team is really strong in every relay but the 800 free relay, and it looks to stay the same for this upcoming season as that squad had two fifth-years last season.

The loss of Hansson will sting for the medley relays, but Podmonikova can fill that gap, though they’ll likely give up a bit of time.

The team also will need to fill the gap of Hansson in the 200 free relay, but the numerous incoming freshmen that have already been 22-mid flat start should be able to slide into Hansson’s 22.0 split pretty easily.

The team looks set up for a really solid season, especially with the returns of three fifth-years and the addition of fifth-year transfer Sarah Watson. With no fifth-years on Virginia’s roster, expect a very tight battle between the two teams at ACCs as the two already got closer in points this past season.

In addition to the fifth-year additions, the holes left by the three NCAA-qualifying graduates can be filled by the freshmen.

It is well known by now that Berkoff had a huge season and continued her success into the long course season earning a medal at Worlds for the United States.

The tricky part for the team may be moving up at NCAAs. Fourth place Alabama returns all of their points, Stanford receives a great freshmen class highlighted by Claire Curzan (though lose Regan Smith), and Texas wasn’t really within reach based on last year. As of right now, it looks as if a lot of things would have to go right for the team to move up at NCAAs, such as hitting their taper perfectly, and perhaps sacrificing a run at the conference title.

Better tell the Old Man to get the Distance Ladies to up the yardage and score some points.

Doesn’t anyone think a group coached by Dino is lacking for yardage?